Road to Shore: the Most Famous Water Highways:

Is it possible to drive over the bridge to the sky or to ride on the ocean waves on your own car or in an old train? It turns out it is! Browse through our Water-gallery and make sure engineering genius can not only subdue the watery element, but also create stunningly beautiful landscapes with it. 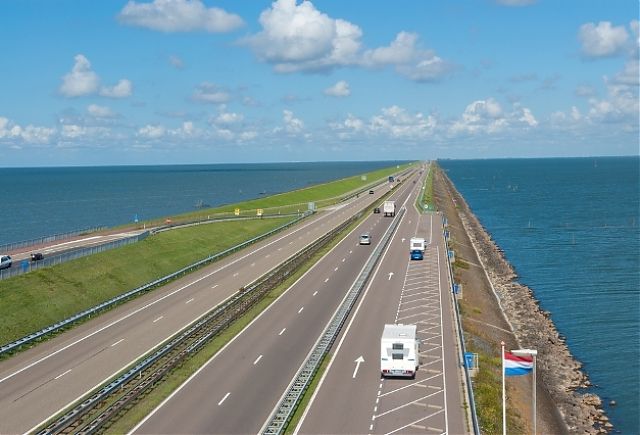 1. Dam Afsluitdijk, Netherlands. Unreadable name is translated simply – closing dam. It extremely accurately reflects its purpose. After all, a large part of this European kingdom is below sea level, and needs to be protected from flooding. The construction, which appeared in 1933, blocked the way to the sea water, turning Zuiderzee bay into a freshwater lake Ijsselmeer. Incidentally, it is not constructed of sand or concrete, but of large boulders extracted at the bottom of the bay.

The length of the dam is 30 kilometers, and the height above the sea level is a little more than seven meters. Curiously, the dutches, adoring bicycle, placed on a strip of 90 meters wide not only a high-speed highway , but the bike path. However, a smooth roadbed of the dam attracts not only the drivers of family cars and cyclists. Ten years ago, the Dutch Formula 1 pilot Robert Doornbos raced on it at a speed of 326 km / h and set a world record for cars outside the track.

2. Atlantic road, Norway. The harsh northern country of trolls and fjords has something to brag about too. The Atlantic Road (or Highway 64) certainly makes to slow down before entering it for two reasons. The first one is admiration. The track 8.5 kilometers long stretches through the island with six bridges, and it offers beautiful views. The second reason is the instinct of self-preservation, especially if you go down this road in autumn, the season of storms. Huge waves crash into the island and over the bridges between them, sometimes even over track and trying to wash the cars into the ocean. But its main attraction is the Bridge to Heaven. When viewed from a certain angle, it seems that this structure is more like a springboard. In fact, the bridge is a “humpback”. What prompted the engineers to give it this look is a mystery.

3. Hoover Dam, USA. Perhaps only the Statue of Liberty more “suffered” from American popular culture than this dam, built in the 30’s of last century, transformers fought on it, terrorists were captured and earthquakes destroyed it. Although its purpose is purely peaceful. Before the construction of the dam melted water of the Rocky Mountains of Colorado River basin overflowed, flooding farmland. Therefore, on the border of Arizona and Nevada in the Black Canyon it was decided to build a huge structure, a length of almost 400 meters and a height of 221 meters. It is difficult to overestimate the value of the dam for transport, as before its construction vehicles had to drive through the canyon circuitous route. However, after the September 11 tragedy, the traffic on the dam was significantly restricted, instead the giant arch bridge across the canyon it was constructed. By the way, the Hoover Dam also performs the function of hydroelectric power station, producing up to 4 billion kW/h of power a year.

4. Great Seto Bridge, Japan. Local people proudly calls it “Seto Oohasi”, “the great bridge across the strait.” It is really something to be proud of – 30 km bridge connects the islands of Honshu and Shikoku, saving a lot of time for hurrying Japanese. After all, before it was constructed one needed to get the ferry from island to island, this was often idle because of the fog. The first attempt to build a Seto bridge was made in 1955, but the ferry workers crashed, killing nearly two hundred people. And only after 33 years, having spent $ 8.7 billion USD, and lost more than a dozen workers, persistent Japanese managed to do it. Today it is the world’s longest complex of two tiers, four-lane road and high-speed railway. For six spans of the bridge no any artificial island was made – the natural ones, scattered around the bay, were used.

5. Eurotunnel, UK – France. It seemed that he had always been there, for its construction from the beginning had been widely covered by the world press. However, the longest undersea railway tunnel was only launched in May 1994. Its total length is 51 km, 39 of which pass under the waters of the English Channel. Thanks to it, the way from Paris to London now takes just 2 hours and 15 minutes, despite the fact that French and British rivals joke, saying “I would like not to see you a little longer.” Tunnel project was proposed by Napoleon. Then it was assumed that it would be be traveled by horse-drawn carriages, and it would be lightened by the oil lamps. Note that from an economic point of view, the construction of the Channel Tunnel is a highly questionable exercise. After all, the company-builder Eurostar, which opened in 1986, was able to get first ridiculous profit of one million euros only in the 2008. And, according to some estimates, the pay-back period for tunnel can assemble a thousand years.

6. Most Hong Kong, Macao, China. The grandiose project designed to combine the two major Chinese cities – the Hong Kong financial center and “the Chinese Las Vegas” Macau. It was planned to open the transport route at the beginning of 2016, but it postponed for one year. In total this transport flyover structure of 50 km length will include three guyed bridges, two artificial islands and a section of 7 km underwater tunnel. Construction of the road is complicated by the fact that the waters of the strait separating Hong Kong and Macau are extremely lively. This sea route is used by two industrial giants of China – Guangzhou and Shenzhen. A huge quantity of goods delivered for export, goes from there by sea. “Warranty Period” of this overpass will be 120 years, and new engineering solutions will be subsequently applied worldwide. The costs of the project will be shared between the authorities of Hong Kong, Macau and mainland China; its amount will be about 17 billion dollars.

7. Marine Highway, USA. Another man-made wonder of the world comes from the United States. The length of the Overseas Highway is 180 km, and it is a part of the US 1 route, stretching along the US East Coast from Florida to Canada. Remarkably, before it was a railroad. The construction of “Marine Railway” was completed in 1912, but in 1935 it was destroyed by a hurricane. It was decided not to start trains on it, and along the old bridges, which are now historical monuments, the highway was built there. By the way, the old bridges are also used by the local fishermen as fishing piers. Total Marine Highway consists of 42 bridges built between the small islands. One of them, called “Seven Mile” (that is its length), is beloved by American presidents. In this regard, a small airport was built there, as well as a small copy of the White House.

8. Pamban Bridge, India. In fact, it is not one, but two mutually parallel bridges, road and rail, across the Palk Strait in the Indian Ocean. Its length is more than two kilometers. And if the first one is not anything special, the second one is worth looking more. It can be said that the train goes right by the sea, because the bridge rises just two meters upon the water. So in a strong storm a thrill for passengers are guaranteed. And passengers, by the way, are numerous. Pamban Island, whose name gave the name to the bridge (the second one has a not so popular name – Indira Gandhi Bridge) is a sacred place for Hindus. Therefore, pilgrims and curious tourists are constantly striving to Rameswaram, the city located on it. In addition, it was decided to make Pamban as the drawbridge for easy navigation.

9. Crimean bridge, Russia. Russia is trying to keep up with Japan or China in the sphere of the giant bridges construction. And not to “catch up and overtake”, but because of the urgent need. This is a big project, which will connect Kerch and the Taman Peninsula. The idea of this crossing has been nurtured for more than a hundred years, not only by the Russians. At various times, building a bridge was wanted by the British Empire (to draw a straight line railway from London to Delhi), by Nicholas II, and even by Hitler. However, because of the world wars and financial difficulties the project was not realized until the present day. In addition to the bridge-project there was the variant with the construction of the underwater tunnel, but it was rejected because the Kerch Strait is an earthquake-prone area. The length of the future bridge will be 19 km and its construction has already begun at the same time from multiple locations, and it will draw on nearly 600 piles. It is expected that traffic on the bridge will be opened in 2019.