Qiandao Lake, a man-made lake located in Chun’an County, Zhejiang, China, formed after the completion of the Xin’an River hydroelectric station in 1959. 1,078 large islands dot the lake and a few thousand smaller ones are scattered across it. The lake covers an area of 573 km² and has a storage capacity of 17.8 km³. The islands in the lake cover about 86 km² 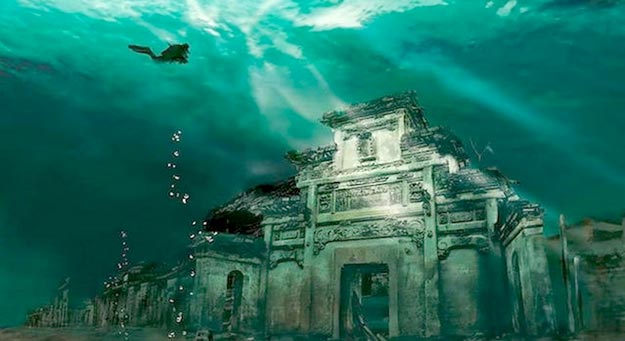 The first underwater exploration attempt of the drowned city was in 2001 when it was discovered there were 265 arches in the preserved ruins. Lion City is about the size of 62 football fields. 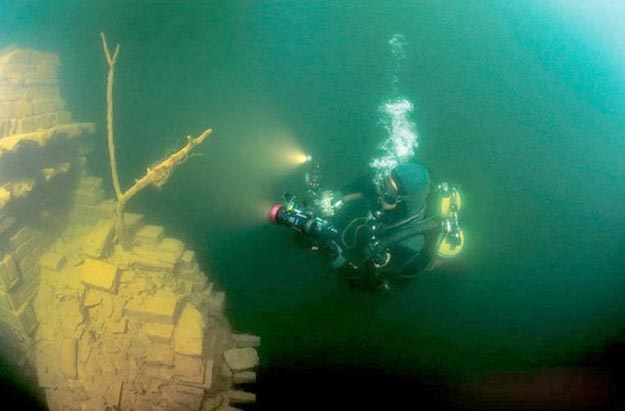 International archeologists said Lion City was an underwater ‘time capsule’. Wikipedia states, “At the foot of the Wu Shi mountain (Five Lion Mountain) lays an ancient city known as Shi Cheng (Lions City), built in Dong Han period (25 – 200), first was set up as county in 208, it was named ‘Lion City’ because of the Five Lion Mountain that sits just behind the city. The city remains undisturbed from the surface at a depth of 26-40m, Big Blue dive operator based in Shanghai, runs weekend trips twice a month throughout the year to the city and has started to uncover parts of the lost city.” 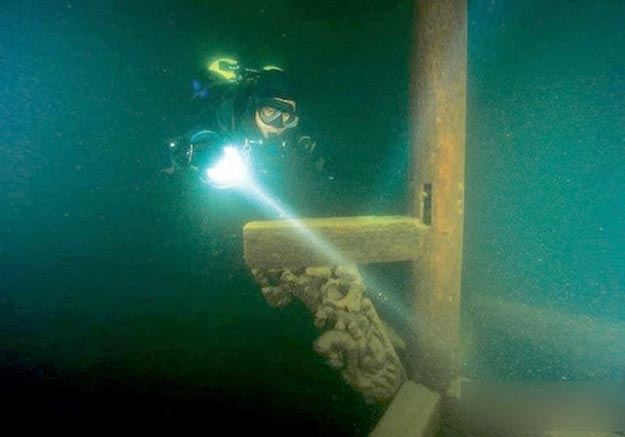 According to National Geography, as the dive depth increased beneath Qiandao Lake, ever darkening, it was almost all black by 28 meters underwater. The diving lights gave only about two meters of visibility and the submerged city is at a depth of 26-40 meters (85 – 131 feet). But they found out that even wooden beams and stairs were intact. 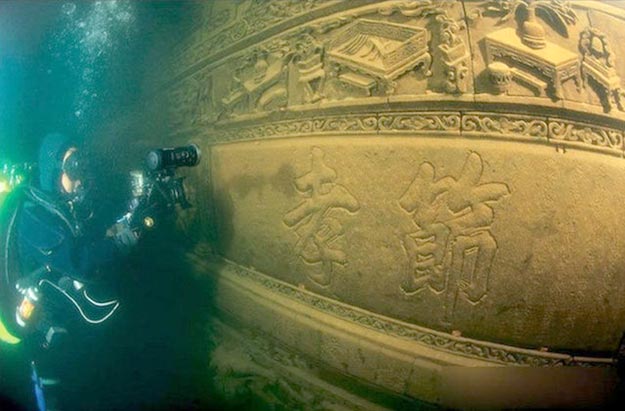 Lion City had five city gates, each with a tower. Before it was buried beneath the water, Shicheng City had six main stone streets that were used to connect every corner of the city. 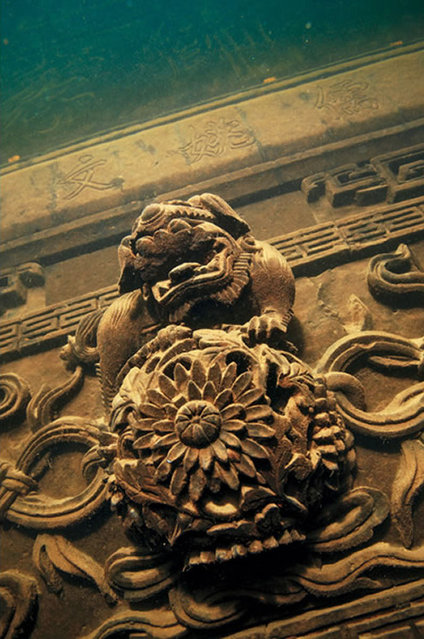 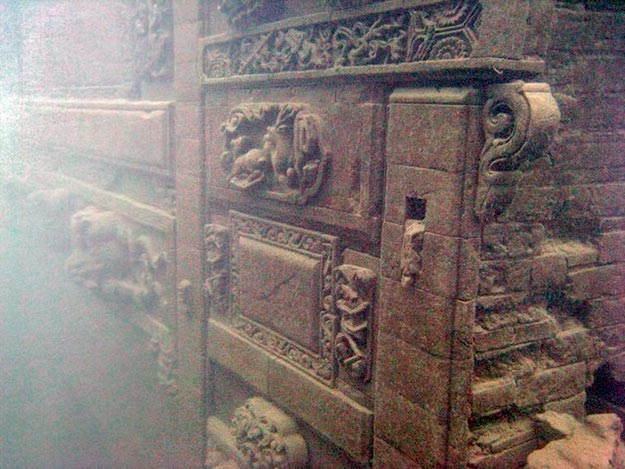 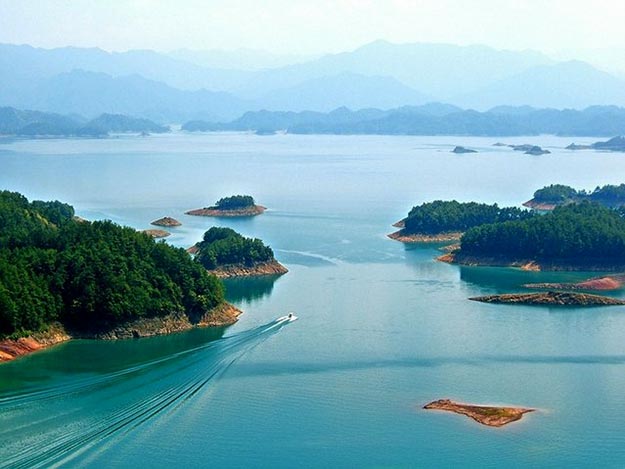 Deep beneath Thousand Island Lake used to be a political and economic hub of the region.

According to Our World, “It was decided to make an underwater city accessible to tourists. Special submarine height of 3.8 meters and a length of 23 meters with a capacity of 48 passengers, was built over six million U.S. dollars to bring everyone in the underwater kingdom.” The proof-of-concept archimedes bridge, a submerged floating tunnel, was not finished and was “banned” to avoid damaging the “delicate undersea structures.” This image was captured in January 2011 as an underwater film crew tagged along with archaeologists to explore Qiandao Lake and the ancient Lion City. 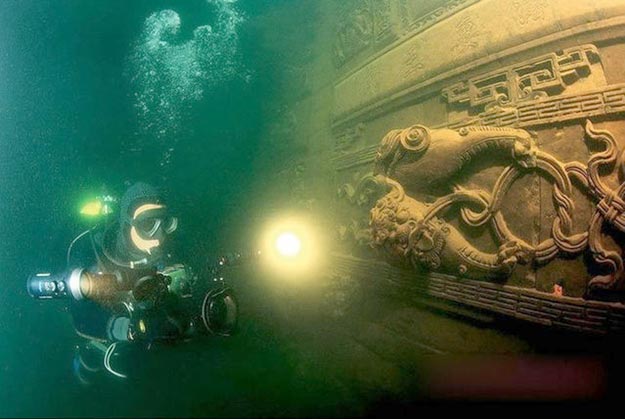 There is a chain of over 1,078 man-made large islands and a few thousand smaller ones at Qiandao Lake.

More than half a century ago, the Chinese flooded Lion City, also called Shi Cheng. Recently Shi Cheng was explored by archaeologists who dubbed ‘Lion City’ as China’s ‘Atlantis rediscovered.’ 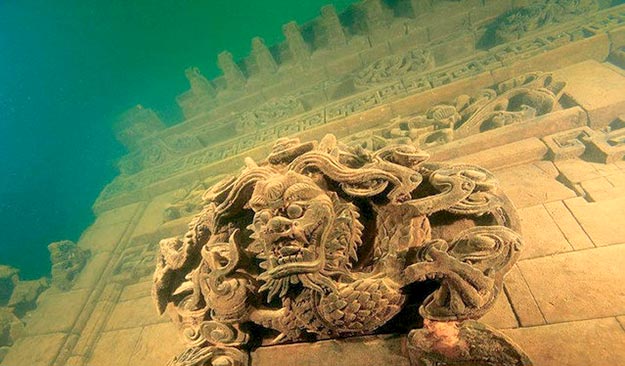 This aerial shot of Thousand Island Lake is interesting, but even more interesting is what lies underneath in the Lost Lion City. 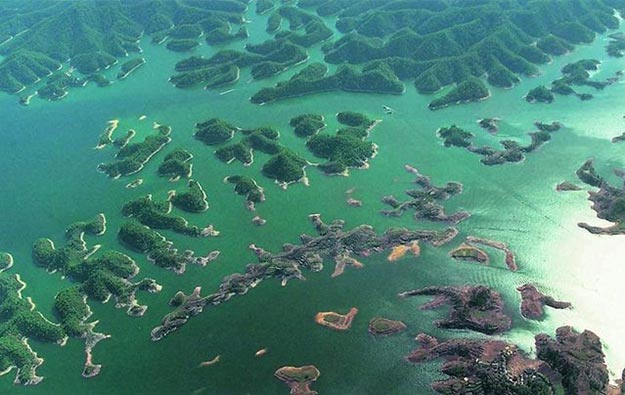 The valley was flooded in 1959 to create the lake for the Xin’an River Dam project. This is Xinanjiang Hydroelectric Station. 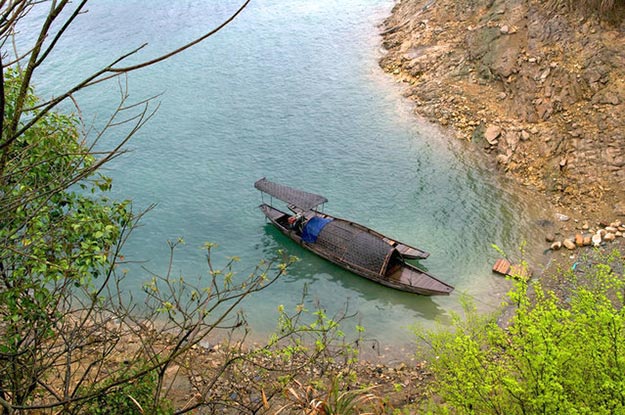 Before Shi Cheng was submerged, 290,000 people had to be relocated from a city where their ancestors had lived in for over 1,300 years.