New research is refuting the theory that the star known as KIC 8462852 is being stripped of its resources by an advanced extraterrestrial civilization, as had previously been suggested. The star rose to prominence last year after a series of irregular, seemingly artificial fluctuations were detected in its light signature in observations made by the Kepler space telescope. 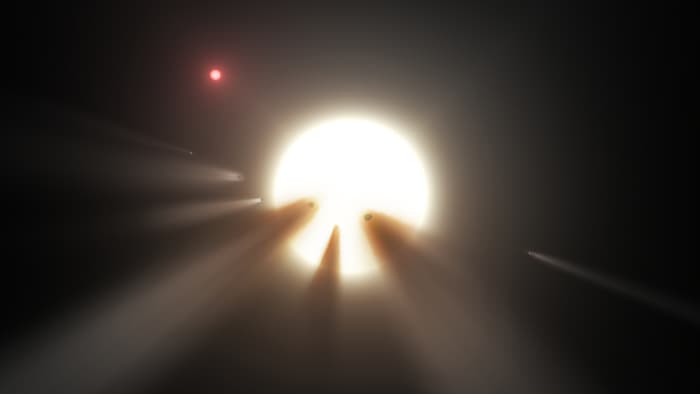 It was asserted that these occultations were theoretically in line with the pattern of dimming that could be expected from a Dyson sphere. A Dyson sphere is in effect a colossal artificial construct that would encircle or even entirely encompass a star.

The claims garnered so much media attention that the SETI Institute trained its powerful Allen Telescope Array on KIC 8462852 in an attempt to listen in for any potentially alien signals. Unfortunately, and much to the disappointment of those looking for signs we aren’t alone in the universe, the search came up empty.

In January 2016, yet another paper was authored on the subject, this time by researchers from Louisiana State University. The study argued that KIC 8462852 had dimmed by roughly 20 percent over the past century, suggesting that the dimming could be explained by an advanced civilization stripping the resources from the star and converting it into the megastructures.

However, the source of information used by the researchers from LSU rang alarm bells for a number of scientists who promptly teamed up to publish an analysis on the study. The LSU researchers had made use of over 500,000 photographic glass plates containing observations of KIC 8462852 between 1885 – 1993. The plates were part of a digital resource called Digital Access to a Sky Century @ Harvard (DASCH).

The scientists reviewing the LSU paper believed that the star itself may not have dimmed at all, but an inconsistency in the type of equipment used to capture it over the period covered by the archive could instead be responsible.

“Whenever you are doing archival research that combines information from a number of different sources, there are bound to be data precision limits that you must take into account,” states Keivan Stassun, Proffessor of Physics at Vanderbilt University and co-author on the recent paper. “In this case, we looked at variations in the brightness of a number of comparable stars in the DASCH database and found that many of them experienced a similar drop in intensity in the 1960’s. That indicates the drops were caused by changes in the instrumentation not by changes in the stars’ brightness.”

Despite the repudiation of the latest alien theory, KIC 8462852 remains an oddity as far as the highly unusual periodic dips in light observed in Kepler data.