Could water ice deposits be lurking in Ceres’ polar craters?

Using data collected by NASA’s Dawn spacecraft, an international team of astronomers has created a Map of the dwarf planet Ceres’ northern hemisphere detailing regions that exist in permanent shadow. According to the study, these dark zones house conditions favorable to the existence of water ice. 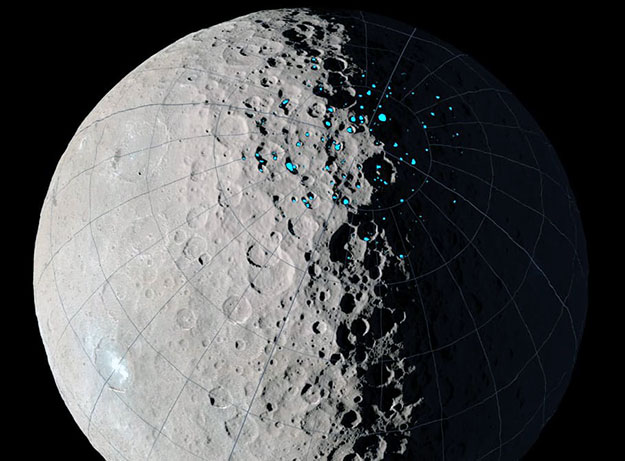 The relatively low mass of Ceres compared to the fully fledged planets that make up our solar system prevents it from maintaining any significant atmosphere when compared to the potent protective shield hosted by Earth, or even the tenuous shell that clings to the Mars. However, Ceres’ gravity is strong enough to prevent water particles from floating off into space.

Should these icy particles migrate to a very cold location on the surface of the planetoid, such as the bottom of a deep crater situated near one of Ceres’ poles, the water would be unable to escape. These permanently-shadowed regions that are devoid of the Sun’s warming influence all year round are known as “cold traps.”

Over time, enough of the tiny particles could accumulate in the cold traps to form a shallow deposit of water ice. Cold traps, which have been discovered on solar system bodies such as Mercury and Earth’s moon had been theorized to exist on Ceres for some time, however planetary scientists were unable to isolate their potential locations until now.

A new study focused on the dwarf planet’s northern hemisphere, as this was the region that experienced the most illumination from the Sun during the period in which the images were captured.
The team created a detailed 3D model of the hemisphere compiled from data harvested by the Dawn spacecraft, and ran it through a series of complex computer simulations. The simulations, which were developed by scientists at NASA’s Goddard Space Flight Center in Maryland, calculated the areas of Ceres’ surface that received the least sunlight and solar radiation over the course of a year, which lasts 1,693 Earth days.

It was discovered that dozens of large areas comprising roughly 695 sq miles (1,800 sq km) of Ceres’ northern hemisphere experience a state of perpetual shadow. This lack of direct sunlight, combined with Ceres distant orbit in relation to our star, result in a temperature that consistently stays below minus 240º F (-151º C) in the cold traps.

Each year on Ceres, it is estimated that 1 out of every 1,000 water molecules circulating the dwarf planet would become imprisoned in the shadowed regions. At these glacial rates, it takes around 100,000 years for the particles to coalesce into a thin layer of ice. However, as these deposits are estimated to be trapped for around a billion years at a time, it is possible that they still exist to this day, and that they would be detectable in follow up observations.

Earlier this month, NASA announced that the Dawn spacecraft would remain in orbit around Ceres, instead of making a planned transition to the main belt asteroid Adeona.

The NASA video below highlights the locations of the various ice deposits in the context of Ceres’ northern hemisphere.