Earth’s Water May Be as Old as the Earth Itself

Liquid water covers some 70 percent of Earth’s surface, making the planet unique in the solar system. But where that water came from has been a bit of a puzzle. 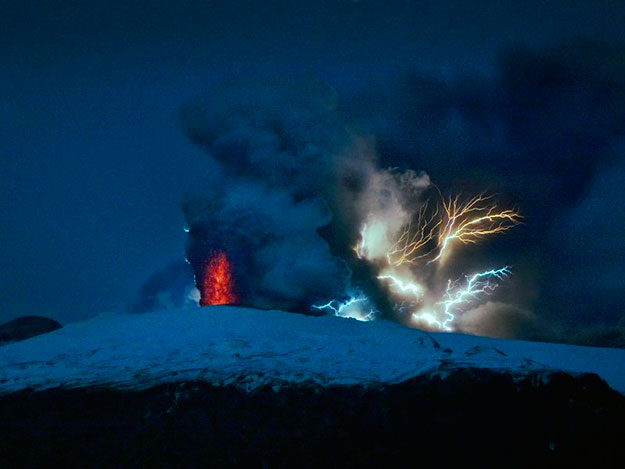 The volcanic plume responsible for the 2010 eruption of the Eyjafjallajokull Volcano in Iceland has also brought up bits of Earth’s ancient mantle from deep inside the planet.

Early in its history, Earth’s surface was so hot that any water would have evaporated into space. Anything that is here today, scientists have thought, must have come from asteroids or comets that later struck the cooling world.

But maybe not. A new analysis in Science suggests that at least some of Earth’s current moisture derives from water-soaked dust particles trapped deep inside during the planet’s formation.

To figure out where Earth’s water came from, scientists look at the ratio of deuterium to hydrogen found in the H2O molecules. Deuterium is an isotope of hydrogen that contains a proton and a neutron in its core, while an atom of hydrogen has only the proton.

The ratio of deuterium to hydrogen in the universe was fixed shortly after the Big Bang. But various processes can alter that ratio in certain locations. On Earth, hydrogen can be stripped out of the atmosphere by the solar wind, and deuterium can be added through cometary impacts.

“We know that the Earth has been hit by some pretty big things in the past—you only have to look at the amount of craters on the moon to imagine what the Earth has been through. Some of the impacting bodies may have contained deuterium-rich water,” notes Lydia Hallis of the University of Glasgow.

Any water that may have been trapped deeper within the Earth, however, wouldn’t have gone through these processes. The tricky part is finding it—due to our rigorous tectonic activity, most of the planet’s surface has been recycled at some point in its 4.5-billion-year history, getting mixed up with altered materials on the surface.

Now, Hallis and colleagues have found possible traces of ancient water in volcanic rocks from Baffin Island, Canada, and Iceland. Both sites have lava that originated in the same volcanic plume, and isotopes of helium and lead indicate that these rocks are remnants of ancient Earth’s mantle.

If these rocks truly have not undergone geological recycling, then any water trapped inside probably preserves the planet’s original ratio of deuterium to hydrogen. After analyzing basaltic rocks laced with olivine, the team found that their ratios were some of the lowest ever recorded. 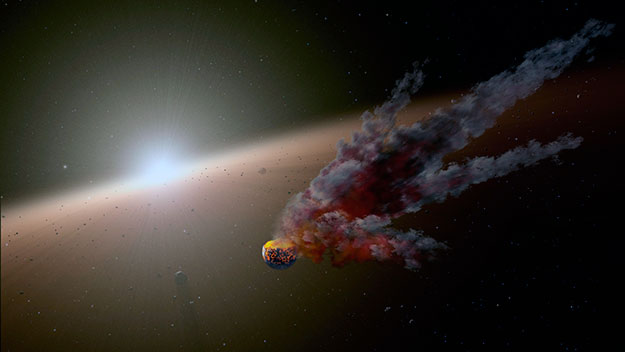 An illustration shows a rocky planet like Earth forming in the disk of leftover debris from a star’s birth. Such planets take shape as dust and gas coalesce in the disk, and through collisions with other primitive rocky bodies. (NASA/JPL-Caltech)

To date, no comets have been measured with a ratio this low, Hallis says. Similar ratios, though, have been found in some chondritic meteorites, rocks left over from planet formation. And scientists know from measurements of the sun that the original ratio was also low in the swirling disk of dust and gas that coalesced to form the planets.

“It seems Earth inherited its water directly from dust in the disk,” Hallis says. “Therefore, Earth’s water was accreted during the planet’s formation, rather than being added later by impacting water-rich material.”

Some Martian meteorites—pieces of the red planet’s mantle—may also have low deuterium to hydrogen ratios. If so, “direct accretion of water onto protosolar dust grains could be an important mechanism for water’s retention in planetary bodies,” she says.