River biodiversity and our water security are in serious trouble, according to a comprehensive survey of waterways released yesterday. At risk are the water supplies of nearly 80 percent of humanity, and a variety of habitats along rivers that carry two-thirds of the world’s water flow. 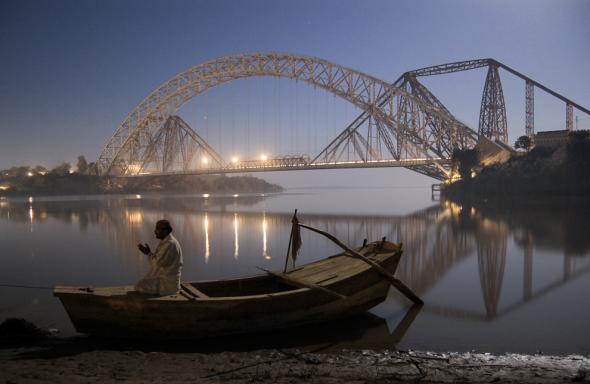 Hotspots of concern include nearly the whole of Europe, the Indian subcontinent, eastern China, southern Mexico, and the United States east of the Rockies.

Rivers, wetlands, lakes, and the life that relies on them, are at risk around the world because of a variety of stresses, including overuse of water, pollution, introduction of exotic species, and overfishing, according to the new study, published today in the journal Nature.

The study maps out all of these stresses and nearly two dozen more; it is the first such detailed map of the threats to human water security and river biodiversity. (See our rivers photogallery.)

Getting to the Source

“We see the rivers in many parts of the world moving into crisis,” said study co-leader Charles Vörösmarty, a water researcher at the City College of New York in New York City.

The roots of many of these problems lie in where people have chosen to live. “We settle in really dangerous places, like in coastal deltas or on floodplains,” Vörösmarty said.

To protect people living there, we “require constant care and attention in terms of the engineering, to build higher and higher levees, for example,” he said.

According to the new Nature report, water supplies are under the heaviest stress in many of the world’s floodplains and deltas—including China’s dammed Yangtze River and along Pakistan’s Indus River, where devastating floods recently displaced millions of people.

Along with the people in all these cities and towns comes the need to feed them. A major problem is that people are literally sucking rivers dry to ensure reliable supplies for agriculture, according to the report’s authors and other experts.

“Many once-perennial streams and wetlands are now dry much of the year because they have been buried or reengineered for human purposes,” writes Margaret Palmer, a biologist at the University of Maryland, in a commentary also published in Nature.
Many developing countries are now following the same route that today’s developed countries took, starting more than 100 years ago, said Vörösmarty, referring to the often complex and expensive engineering of dams, reservoirs, irrigation canals, levees, tunnels, and pipelines used to harness, divert, and distribute water.

“It’s the twentieth century view” that we can “throw concrete and pipes at the problem,” he added.

However, he warned, many developing countries may have neither the money nor the energy to follow this path for much longer.

There are ways of “working with nature to prevent problems from arising,” Vörösmarty said. “You could say that a fluid ounce of prevention is worth a gallon of cure.”

Projects that “work with nature” and try to restore more natural flow of rivers can help ease the pressures on rivers and improve water quality, the new study argues.

This can involve allowing rivers more room to flood, and also allowing them to set their own path, rather than forcing them along certain routes.

Most river restoration efforts so far have been in more wealthy countries, and have found only limited success, McIntyre said.

“It costs a small fortune if you want to attempt to restore some of the natural functions of rivers and streams,” he added, “and you can only manage to restore them partially in most cases.”

But there are some success stories, such as on the Mississippi River.

The Army Corps of Engineers and local water managers in Louisiana have started to let the river overflow into adjacent fields, as it did before levee construction became widespread following a devastating flood in 1927.

In this way, those fields serve “as big shock absorbers to avoid damage [and flooding] downstream,” where cities, instead of farmland, are at risk, Vörösmarty said.

Another success story is New York City’s water supply, which has been kept clean at a relatively low cost by protecting the forests and other land in the watersheds that feed the Big Apple. The forests help filter water and hold soil in place, preventing a lot of sediment from running off, which then keeps the reservoirs supplying New York City much cleaner.

McIntyre points to similar projects under way in Bogota, Colombia’s capital, and in other South America cities.

Robin Abell, a conservation biologist with the World Wildlife Fund, said that while river restoration efforts are “quite promising, river conservation stories are rare, typically local in scale, and often come as a result of large investment.”

“We are still struggling to find strategies that can make a meaningful difference for freshwater biodiversity,” he added.