Study warns of threats to water security and biodiversity in the world’s rivers. 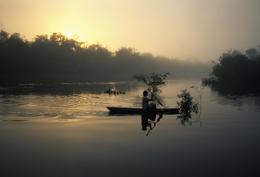 Only isolated parts of the Amazon have low levels of threat to water security and biodiversity.

Nearly 80% of the world’s population — 4.8 billion people as calculated in 2000 — live in areas experiencing a high level of threats to human water security or biodiversity.

But a study published in Nature today is the first to consider factors affecting both human water security and biodiversity in its analysis of threats to global freshwater resources, such as pollution and the density of dams1.

“If you analyse water-security issues from both a human and biodiversity perspective, you find that the threats are shared and pandemic. Even rich countries, which you would expect to be good stewards of water, have some of the most stressed and threatened areas,” says Charles Vörösmarty, a civil engineer at the City University of New York, one of the lead investigators of the analysis.

“The study addresses one of the biggest issues affecting global water resources, and that is how to strike a balance between the need for water for human development and the need for water for other ecosystem services,” says David Molden, deputy director for research at the International Water Management Institute, based near Colombo in Sri Lanka.

Downstream effects
Vörösmarty and his colleagues carried out a computer-based assessment to quantify documented threats to human water security and freshwater biodiversity in global river systems. From this they produced a series of global maps showing the cumulative effect of the multiple threats. One of the maps illustrates areas where human water security is affected, together with the severity of the threats. Another charts the same areas and threats for biodiversity, and a third map combines the two surveys.

The researchers found that regions of the world with intensive agriculture and dense human settlement, such as the United States and Europe, experience some of the highest levels of threats to both human water security and biodiversity.

In addition, the results show that local impacts are transported downstream, with more than 30 of the 47 largest rivers in the world, including the Nile, recording at least moderate threat levels at the river mouth. Only a small fraction of the world’s rivers are unaffected by humans, with remote parts of the Amazon that flow through dense rainforest showing the lowest levels of threats.

Trade-off
Through costly engineering solutions, developed countries can provide their populations with clean water. But poorer countries such as China sometimes struggle with basic water provision, says Vörösmarty. He estimates that, by 2015, around US$800 billion will be required to cover the annual global investment in water infrastructure.

Vörösmarty notes that technological solutions that help to deal with threats to human water security, such as building dams, can harm biodiversity. But he adds that there does not need to be a trade-off between providing people with water and protecting biodiversity. For example, preserving flood plains rather than constructing flood-control reservoirs would provide a cost-effective way to control floods while protecting the biodiversity of wildlife that occupies such areas.

“If you want to manage water resources better, you have to jointly manage biodiversity protection and human water security,” he says.