With the help of very high-power laser beams, researchers at the University of Rochester have created micro and nanostructures that turn metals black and make their surfaces very easy to keep clean and dry. The advance could help prevent icing and rust, collect heat more effectively and perhaps even translate to other materials, leading to water-repelling electronics. 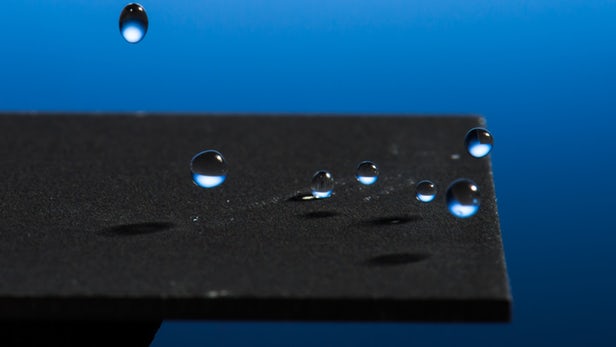 There are many super-hydrophobic coatings out there that can quickly and effectively repel water and other liquids to keep metals rust-free and t-shirtspristine. The problem, however, is that they rely on chemicals that can eventually wear off and leave the underlying material at the mercy of the elements.

Professor Chunlei Guo and colleagues at the University of Rochester have found a way to treat metals so that they themselves become permanently averse to water, or super-hydrophobic. They have achieved this with the help of femtosecond lasers, which shoot extremely high-power pulses over a very short time (a femtosecond is a millionth of a billionth of a second). The power is high enough to engrave micro and nanoscale structures into the metal and change its properties at the surface.

The same team had previously used femtosecond lasers to create water-attracting (hydrophilic) metals which were so effective that they made water flow uphill. Now the scientists chose to turn to the complementary problem.

Using powerful 65-femtosecond laser pulses at a rate of up to one thousand per second the scientists were able to change the surface structure of platinum, titanium and brass samples. The structure they produced was an array of microscopic grooves which were then covered by 5 to 10-nanometer features, a design that was partly inspired by the way in which lotus leaves keep water and parasites at bay. 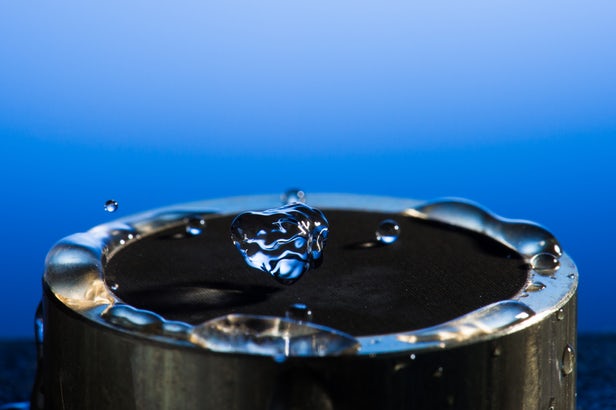 The result is a remarkable material that not only repels water very effectively (tilt the surface by five degrees and the water slides or bounces right off), but is also velvet black from every angle (which makes it highly light-absorbing) and even self-cleaning.

In order to test the self-cleaning properties of their structure, Guo and team took ordinary dust particles from a vacuum cleaner and dumped them on the surface of the treated metals. According to the scientists, three drops of water were enough to remove about half of the dust, and a dozen drops left the surface spotless. In the real world, the materials would be able to clean themselves very effectively as drops if rain, dew or fog fall onto the surface and quickly drag away the dust, leaving it both clean and dry.

There is potential for this technology to make a difference in developing countries, to collect rain water more effectively or to create latrines that are remain clean without flushing, staving off disease. The combined light-absorbing and water-repelling properties could also help make solar thermal collectors that perform consistently and without the need for cleaning.

Guo and team are now investigating how they might apply their technique to non-metallic materials, which could eventually lead to water-repellant electronics. But before this technology can get out in the real world, the researchers will need to look into ways to scale up effectively. As things stand now, it takes one hour to produce a one square inch sample.

The advance appears in the Journal of Applied Physics and is further illustrated in the video below.