The Colorado River and Its Unnatural World

The waterways of the West now exist as monuments to an ambitious desert civilization. Across this vast region of America, few, if any, rivers flow without hosting one or more dams, concrete channels, diversions or other human-made “improvements” that allow people and farming to flourish in this dry country. And few, if any, rivers reveal this unnatural world more than the Colorado, which no longer reaches the sea or carries along its entire 1,450-mile length much of the reddish silt that inspired its name. 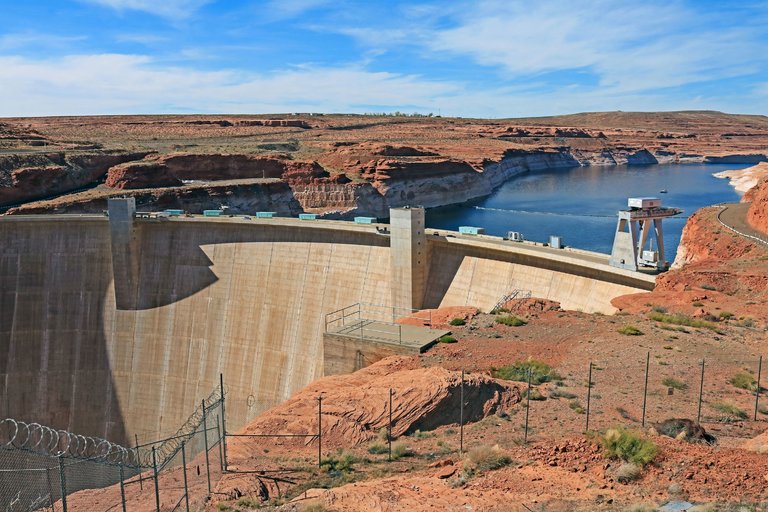 Glen Canyon Dam on the Colorado River near Page, Ariz.

The prolific author and New Yorker contributor David Owen details what has happened to the river that once carved the Grand Canyon in his new book, a brisk and informative travelogue that wends from headwaters in the state of Colorado to where the water trickles to a halt in a riverbed cracked by the heat of the desert sun in Mexico. This is well-traveled territory, including Marc Reisner’s classic book from 1986, “Cadillac Desert,” which remains the definitive work on the West and its water woes. The problem then, as now, is people — and what we have chosen to do with the water.

The people of the Western states, in collusion with the federal government, have opted for irrigation, power and sprawling cities in the desert like Los Angeles and Phoenix. The glass of Colorado River water is either half-full or half-empty, depending on whether you think water woes bring out the cooperative side of people, or the litigious. As Owen discovers on his journey, both are true — lawyers and legislators make a good living adjudicating claims, but owners of water rights also often work it out among themselves without drying anybody out. This is a system that muddles through on a blend of threats and collaboration, with the underlying understanding that everybody must win or everyone will lose, as the longtime water reporter John Fleck explores in his illuminating recent book “Water Is for Fighting Over.” It remains to be seen what the likely shortfall of rain and snow brought by global warming will do to this already fraught series of arrangements.

Owen’s travelogue serves as a primer on a system ruled by “Water Buffaloes,” the men and women who decide among themselves where the water goes and who gets what, an arcane group perhaps better called beavers for their overwhelming desire to dam and shunt flowing water. But the flow of Owen’s journey also sometimes bogs down in distracting asides, from lodging recommendations to incompletely explored tidbits of provocative history like the mass-killing Anglo-Irish hunter Sir St. George Gore, for whom one canyon Owen visited is named, or the effort to frack free natural gas with nuclear bombs. Owen has the keen observation of a birder combined with the breezy writing to draw you in with unusual insights — like the vagaries of an American economy that make a vineyard in Colorado a loss leader for tourism dollars, or quagga mussels invading the river and its reservoirs — but he also often wanders off course, away from the river and an explanation of where its water goes.

The core conundrum of the Colorado in Owen’s view is efficiency, which happens to be the subject of his last book. Using less water to flood fields or lawns means more water to build suburbs in desert cities. And water is not just water, it’s electricity — both generation at dams but also massive coal-burning to power pumps — as well as food. Without Colorado River water, much of America could not enjoy salad greens in winter, for example.

There is a brand of upbeat defeatism in Owen’s exploration of this efficiency paradox: There is nothing I can do as an individual to solve this problem so perhaps I might as well not bother trying and just go golfing. Yet it is a host of individual actions and amendments in thinking that add up to a necessary society-level change, like the way oil pipelines have become a subject of protest rather than a matter of course, or the exile of smoking from American life. Like the individual snowflakes that add up to the snowpack that gives the Colorado River its force, seemingly small shifts can feed a flood of change. The “Water Buffaloes” of Arizona may waste and store Colorado River water today just so California can’t claim it, but that is not an immutable fact. There is precedent for hopeful change, including the hilariously understated, patiently negotiated bureaucratic codicil known as Minute 319, where every Colorado River state and nation, from Mexico to the native peoples of what is now the Western United States, got something, including nature — a one-time “pulse” flow of water in 2014 to see what might happen if the Colorado reached the sea anew.

John Wesley Powell, who led the first American expedition to navigate the Colorado River, issued a prophecy later in his life: “There is not sufficient water to supply these lands.” It is a prophecy that has echoed down through the decades in a host of books and laws and rulings, and yet the water is still there, as are more and more people whose life the water makes possible. “Where the Water Goes” raises more questions than it answers, but if wondering where the water comes from prompts readers to plumb this voluminous literature around the Colorado River more deeply, then Owen’s book will have done important work.

“The world’s gathering environmental problems are deeply interrelated, and they can’t be effectively addressed in isolation: water here, energy there, transportation somewhere else,” Owen writes. There’s a term among scientists for those interrelated, gathering problems: the Anthropocene. As Owen shows, the Colorado River is a great, sad, terrifying, possibly hopeful example of the pervasive, permanent mark people are making on the planet, earning us a potential place in the record written in rock. Part of the work of the next few decades is to imagine and build a better future rather than letting inertia reign.

Perhaps that better future allows the Colorado River to flow along its entire course, restoring a once lush wetland teeming with life while also allowing for all the human uses along its length. That delta has been dead for more years than I’ve been alive, killed by the filling of Lake Powell, which means everyone born after 1963 accepts this as the normal state of affairs. But there is no reason I or my children couldn’t see Lake Powell and the delta. Our hand is on the faucet of a formerly natural, unpredictable waterway; what will we do with that power and responsibility?