Tracing the Waterways Beneath the Sidewalks of New York

When a vein is hard to find beneath a patient’s skin, doctors and nurses will sometimes tap on an arm, making the vessel visible. 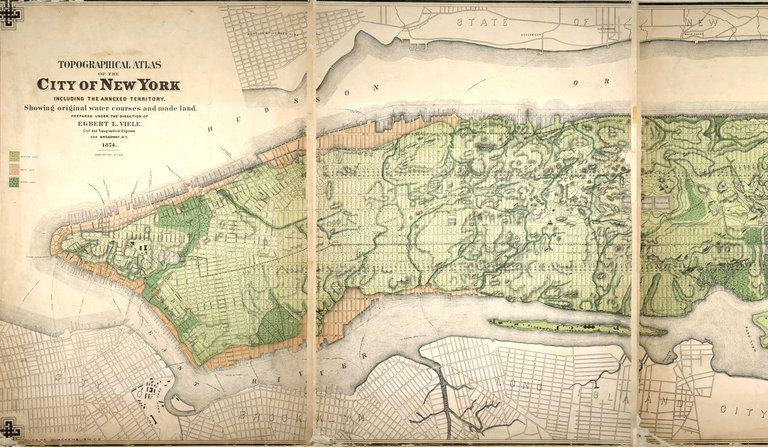 On Friday afternoon, using blue chalk paint, Stacy Levy plans to palpate a few sidewalks on the Upper East Side of Manhattan to visualize the path of a stream, now out of sight, that has been running since ancient times.

Water doesn’t stop flowing because subways, shops and towers are built over streams and ponds. Much of New York before European settlement was a rich, wet archipelago. “Nature is not kicked out of the city,” said Ms. Levy, an environmental artist.

Searching for the city’s vanished waterways has become a form of specialized detective work, much of which begins with the Viele Map.

In 1865, Col. Egbert L. Viele, a West Point graduate who served as the chief engineer for Central and Prospect Parks, charted every existing waterway in Manhattan, and laid the map across the street grid. It records a city that had not yet been topographically reshaped to make room for its explosive growth in the second half of the 19th century; today, very little of those waterways can be seen without intrepid exploration in sewer lines.

But the map is digitally rendered online in the collection of David Rumsey at davidrumsey.com. It is still used by developers in Manhattan.

In pursuit of one stream, Ms. Levy is running a sidewalk workshop at 4:30 that begins at 68th Street and Lexington Avenue, followed by a lecture under the sponsorship of NYC H2O, a nonprofit that provides education on city water and ecology.

“We are going to meet at Hunter College and walk the path of a tributary,” Ms. Levy said. “Actually, roughly the path. It would be winding through lobbies and entryways of buildings, but we will be on the sidewalk. We are going to be painting with blue chalk paint, iterating its passages.” 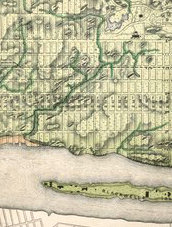 The stream being traced made its way along the east side of Manhattan, with some of it captured in a pond in the southeast corner of Central Park, and other branches eventually flowing into the East River at 47th Street. Historical texts show that a “kissing bridge” crossed it around 50th Street, and the name of the waterway appears to have been De Voor’s Mill Stream, said Steve Duncan, who has explored and documented the city’s watercourses, past and present.

“In New York, we were blessed with plentiful natural streams,” Mr. Duncan said. “Clear lines with an origin and endpoint, that is not how they work in real life. Water is feeding in all along the path.” Engineers in the 19th century followed those old watercourses in building sewer lines, he said.

Today, an especially large sewer line runs east along 47th Street, where the stream ran to the river. When the weather is dry or not very rainy, the combined storm-water runoff and domestic sewage is captured before it gets to the river and sent south to a treatment plant in Brooklyn. When there’s too much flow, both untreated sewage and storm-water go through the large sewer line, beneath the United Nations, and discharge into the East River, Mr. Duncan said.

Noting that the pond in Central Park, fed by the same stream system, is relatively clean, Mr. Duncan said it didn’t stay that way after heavy rain: “As soon as it comes out of the park, we mix it with the combined sewage.”

Tickets for Ms. Levy’s workshop and lecture are free, but should be reserved at eventbrite.com,said Matthew Malina, the executive director of NYC H2O. Most of the group’s talks tend to be more technical, he said, and he appreciates that Ms. Levy will provide another perspective. She will supply brushes and the chalk paint (“It washes away in the next rain,” she said), and talk about ways people can render the water.

Water that runs into turbulence, hitting a rock, takes on forms that are seen throughout nature, she said.

“You get these wonderful swirling vortices,” she said. “It’s like the spiral shape that hurricanes make at the beginning. It’s the way blood pumps through your heart. Da Vinci cast a glass heart and found that out. When you stir cream into your coffee, those forms are the exact same as a hurricane or in blood flowing through the heart.”

People in the workshop can figure out how to represent that turbulence, she said. Whether through brushstrokes or by gaining fresh knowledge of what is hidden, the connection will have power.

“You’re walking down a city street and get a sense that it is connected to another time,” Ms. Levy said. “It makes you feel more at home when you know what was there.”