Water is the substance that gives life. Even if it is coming from the earth like a scalding fountain. Even in ancient times, people found the use of geothermal sources. And to the XXI century the scope of their application has grown from baths to power plants that produce environmentally friendly energy. The most amazing objects will be discussed in today’s Water-gallery. 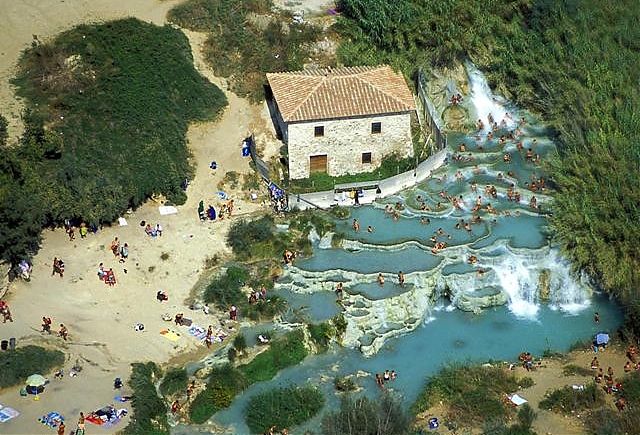 1. Tuscany (Italy). The hills occupy about two thirds of the Tuscan countryside, and about a quarter of -the mountain. If you for some reason are tired of the Mediterranean Sea, head for the Cascata del Mulino, the so-called mill falls. Once it spun the millstones mills and now the tourists are splashing in the water with a constant temperature of 37.5 degrees year-round. Wishing to heal you can visit Bagni di Petriolo. Even the name of these hot springs is consonant with the Russian «banya» (bath), but even with a nice bonus in the form of mineral clay. Tuscany has not been bypassed by the attention of power engineering, in the near future it is planned to build a geothermal power station Bagnore 4 with a capacity of 40 MW.

2. Olkaria IV (Kenya). Ironically, the world’s largest geothermal power plant (referred to as «Geothermal») is not located in a country with the developed technology and economy. Although, it has not been done without their participation. Korean and Japanese investors from Hyundai and Toyota were not deterred even with the name of the place, where the station was built. African National Park with its horrible name «The Gates of Hell» was anciently famous for its geothermal springs. Nearly $ 130 million were invested in the project, and the power of Olkaria IV was 140 MW. Which, incidentally, is not the limit, because the capacity of the station is truly vast – 2000 MW, while the country’s demand is only 1000 MW.

3. Geysers (USA). For over half a century this is the name of the world’s largest network of geothermal power stations, located in California. The source of power and profit of the company is a large source of magma with a diameter of 13 km, bubbling at six-kilometer depth. According to archaeologists, these sources are “exploited” by man for 12 years! In ancient times the Indians were preparing food here, and constructed steam baths. The commencement date of commercial use of the site is considered to be 1960, when the first geothermal power station with a capacity of only 12 MW was built. Today this figure has increased by 75 times. It is worth noting that States are the world’s largest producer of geothermal energy. Its total capacity is 3.4 GW.

4. Kusatsu-Onsen (Japan). This hydropathical resort became famous in the nineteenth century with the submission of a German doctor Erwin Belec, a founder research. Witty Japanese proverb says that its water cures all diseases, except love. In addition to the treatment, the businesslike Japanese have come up with a few more uses for the hot water sources. To combat icing of roads, for example, pipes with a hot steam or a special fluid, heated by the warmth of the subsoil, are used. Also greenhouses with fruits and vegetables are steam heated. In the old days the «manju» cakes were prepared at the steam of geothermal sources. Unfortunately, Japan is gradually declining from geothermal power stations. The reason is hydrogen sulphide that is released together with the steam, adversely affecting the ecosystem. To build more environmentally friendly stations in the country is, actually, possible, but yet too expensive.

5. Nesjavellir (Iceland). As for the geothermal energy use, Iceland, in the literal sense, is ahead of the rest. The gift of the harsh Northern gods to the Icelanders is a giant tectonic fault, called the Mid-Atlantic Ridge that divides the island in two parts. It was next to it, only 40 km from Reykjavik, in 1990, where Nesyavellir was built. Now the population of the island is not concerned about the price of oil, because all the capital is supplied with environmentally friendly heat and energy from the inexhaustible source. Even under the sidewalks in Reykjavik heating pipes are laid, which helps to save on snow removal. And it is only 240 km from the Arctic Circle! By the way, the cost of 1 kW / h energy is equivalent to just 2 cents. It is interesting that in this area more than a thousand years ago the first Althing was held, which laid the Foundation of the Icelandic state.

6. Mutnovsky geothermal power plants and Viljuchinsky sources (Russia). Kamchatka Peninsula was called the by the researchers «the land of ice and fire». And hot springs have always been the nearest neighbors of volcanoes. Geothermal energy here perfectly coexists with the tourism. Mutnovskaya geothermal power station is the largest geothermal power plant in our country. Putting into operation took place relatively recently – in 2002. Since then, the station produces 50 MW of clean energy per year. And for those who want to rest and heal in the same Elizovsky district of the Peninsula, there exist Vilyuchinskie hot springs. Mountains, hills, a 40-foot waterfall and, most importantly, healing water. The whole complex is divided into Upper and Lower parts. The temperature of the Upper springs reaches 52 degrees, and a mile below the water is heated to 60 degrees.

7. Hévíz (Hungary). The small town of Hévíz with a population of about 5 thousand people, 200 km from Budapest, would have lived a normal life of provincial Europe, if not the same named lake in its vicinity. Hévíz is the largest thermal lake of Europe, with an area of 4.7 ha. The temperature of the water varies from 24 degrees in winter to 36 degrees in summer, which allows taking tourists all year round. Almost everything useful that exists in the periodic table is contained in this pond. Of course, each considered therapeutic source has its own specialization. A trip to Hévíz will be recommended by an experienced doctor if you have problems with blood circulation, the musculoskeletal system or joints.

8. Waimangu (New Zealand). Imagine a boiler with the size of a valley. Now imagine what would happen if such a boiler will break the cover. Such feelings New Zealanders had exactly four years (1900 and 1904) while Waimangu was active, the largest geyser in the world over the entire history of observations. It arose, as scientists assume, after the eruption of the volcano Tarawera in 1886. The name Waimangu is translated from the Maori language as black water, which is associated with the color of mud masses, thrown up from the geyser. With a frequency of 5 to 30 hours, this beast has thrown for 800 tons of boiling water and mud to a height of 460 meters! At the moment the geyser-giant is silent, recalling past events only by geothermal activity in the valley and by the steam clouds escaping from the land.

9. Puritama (Chile). Amazingly, one of the driest places on the planet, the Atacama desert, also has water. However, it is hot. The name of these sources translates as «hot water». A place virtually unknown to tourists but revered by Indians since the days of the ancient Incas. It is not surprising that this natural phenomenon is still treated as something sacred. After all, in the dry Atacama, where rainfall is less than 1 cm per year, water is valued much more than gold. Artificial terraces where crops cultivated, still remain around eight pools of the source. By the way, the area around Puritama is used now. However, not by peasants, but by… NASA! This is where the training of people for a mission to Mars takes place.