Water on Mars: What Does It Really Mean?

A new find of liquid water fuels hopes that life may yet exist on the red planet. 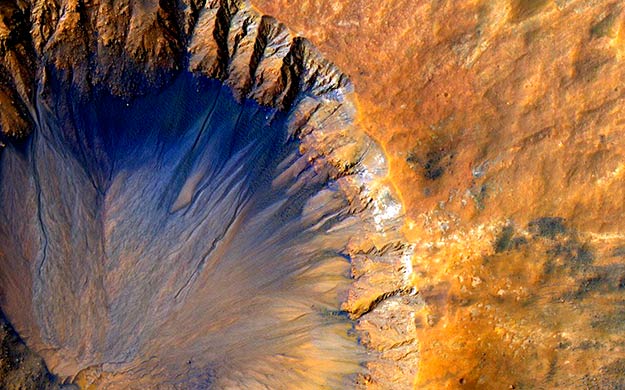 It’s tempting to say that the announcement of liquid water on the surface of Mars heralds a new era in Martian exploration.
You might think that the first human explorers on Mars will park next to a salty stream and use it to manufacture fresh drinking water. Maybe they could even find life in damp Martian nooks and crannies, areas where the dusty red planet can still fuel microbes.
Reality is much more subtle. Finding evidence for flowing water is not the same as finding life. Right now, scientists don’t know where this water is coming from, or if the chemistry in these Martian seeps is even life-friendly. And unfortunately, chances are it will be a long time before we can get there to find out.

“It’s hard to get a spacecraft clean enough to send a lander or rover there right now,” says Bethany Ehlmann, a planetary geologist at Caltech, referring to concerns about hitchhiking Earth microbes contaminating the Martian surface.

But there’s still reason for excitement. These seasonal seeps, which scientists call recurring slope lineae, “are probably the best place to look for modern life,” she says.

Here’s what scientists know. Analyses have confirmed that enigmatic streaks that appear in summertime on the planet’s slopes are produced by liquid water—salty water, perhaps capable of sustaining chemical reactions and even life.

Like Mars itself, the dark watery streaks are ruggedly beautiful, as seen in photographs taken by the HiRISE camera aboard the Mars Reconnaissance Orbiter. But for all their picturesque drama, these dark marks represent more of a trickle than a flow.

It’s possible they’re fed by some kind of underground aquifer, or a buried icefield that thaws in warmer weather and sends melted Mars water sliding downhill.

While not outside the realm of possibility—we do know there’s ice buried beneath the Martian surface—such scenarios aren’t as likely as the one scientists favor: The water comes from the atmosphere. If that’s true, it’ll be a much tougher resource to tap into.

But how could water from the atmosphere form these dark streaks? On Mars, as on Earth, salts on the surface can absorb atmospheric water vapor and trap it in their crystal structures. Then, when the soggy crystals warm up, they dissolve. The whole liquidy mix surrenders to the tug of gravity, and off it goes, tumbling downhill.

But there’s no guarantee this is happening on Mars. McKay notes that the type of salts near the Martian streaks, called perchlorates, form different watery mixtures than the salts we’re most used to on Earth. In fact, it’s possible the perchlorate streaks could behave similarly to Antarctica’s Don Juan Pond, which is the saltiest liquid water body on Earth—and totally dead.
“Such a brine is not suitable for life and is of no interest biologically,” McKay says. “Nothing can live in the brine of Don Juan Pond.”

So, seeps fueled by atmospheric humidity might not make the most convenient water well for human colonists, and they might not even be ideal habitats for Martian microbes—but wouldn’t it be worth finding out?

Of course. What we know so far, based on the single example of Earth, is that life tends to show up wherever there’s water. That’s why NASA’s search for life beyond Earth has been driven by the mantra, “Follow the water.”

The frustrating irony here is that NASA can’t follow this particular water. Not yet.

MARS ONCE HELD AN OCEAN

An ancient sea once covered a fifth of the planet’s surface, astronomers found by calculating how much water the planet has lost over time.

Sending a spacecraft to an area where liquid water flows is much too risky, cautions NASA’s Office of Planetary Protection. Finding water in the streaks will brand them as a “special region,” an area where spacecraft can land only after thorough cleaning or sterilization, says Ernst Hauber of the German Aerospace Center.

If hitchhiking microbes were to somehow survive the journey to Mars and find themselves in a briny bath, it’s possible they could gain a foothold and contaminate the red planet. Such a scenario would not only complicate any future detection of life on Mars, but also introduce a potential disaster: Think about how great we are at hastening the spread of invasive species on Earth.

It’s certainly worth the caution, though humans walking on Mars (which some say is the next goal in solar system exploration) are much more likely to shed microbes than a sterilized robot is, and Earth microbes aren’t necessarily likely to thrive in Mars brines.
If there’s one big story from the past decade of planetary exploration, it’s that water is everywhere. It’s tucked into moon dust, frozen in Mercury’s shadowed craters, streaming off the backs of comets, and sequestered inside the shells of icy moons. Mars, finally, has joined the population of bodies where we know water flows—and that’s interesting enough on its own, without the breathless speculation.

“Modern Mars is right ‘on the edge,’ ” Ehlmann says, as an active world where liquid water exists even today. “Just a slight tweak in climate could make waters even more widespread.”