The possible presence of liquid water is certain to revive speculation that Mars is teeming with microbial organisms. The recipe for life, at least as we know it, calls for liquid water, carbon-based molecules and a source for energy.

There is plenty of ice on Mars, but the chemical reactions for life come to a halt when water freezes. 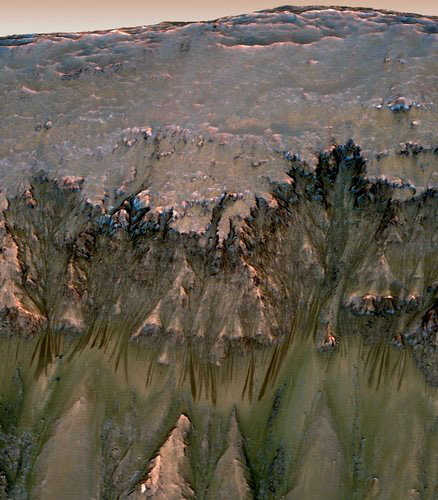 High-resolution photographs taken by NASA’s Mars Reconnaissance Orbiter, which arrived at Mars in 2006, show fingerlike streaks up to five yards wide that appear on some steep slopes in the planet’s late spring. These streaks grow and shift through summer, reaching hundreds of yards in length before they fade in winter. One crater had about 1,000 streaks.

But finding streaks is not the same as finding water. An instrument on the Mars orbiter capable of detecting water has not found any, but that might just mean that the amount of water in the flows is too little to be seen.

“We have this circumstantial evidence for water flowing on Mars,” Alfred S. McEwen of the University of Arizona, who is the principal investigator for the camera, said Thursday during a news conference. “We have no direct detection of water.”

Dr. McEwen and his colleagues report their findings in an article published in Friday’s issue of the journal Science. The scientists said the best explanation they could offer for the streaks was that they were caused by a flow of extremely salty water down the slopes. The salts, which have been detected all around Mars, would allow the water to remain liquid at much colder temperatures than pure water.

However, the scientists said, they have yet to fill all the holes in their story. They cannot, for example, explain how the water darkened the soil. They are also at a loss to explain why the streaks vanish each winter.

But, Dr. McEwen said, “We haven’t been able to come up with an alternative that we believe.”

The streaks have been definitively seen in seven locations and tentatively identified in 20 others. “The sites where these occur are rare,” Dr. McEwen said.

Scientists have known for years of vast swaths of frozen ice on Mars. Many geological features like canyons, dried-up lakes and river channels point to the flow of liquid water in the distant past when Mars may have been warmer. In 2000, images taken by the Mars Global Surveyor spacecraft showed fresh-looking gullies, which some scientists hypothesized had been carved by water. More recent looks indicate that they were more likely cut by carbon dioxide frost.

However, the areas where the dark streaks occur, located in the southern midlatitudes, are too warm for carbon dioxide frost.

“I think this is the best evidence to date of liquid water occurring today on Mars,” said Philip R. Christensen, a geophysicist at Arizona State University.

Scientists are not likely to be able to confirm their suspicions anytime soon. The Mars Science Laboratory rover, scheduled to launch late this year, will not be able to help. Its landing site is far from any of the streaks, and it would not be able to navigate the steep slopes. Dr. McEwen said that experiments on Earth mimicking Martian conditions provided the best hope for understanding what is going on.

At the news conference, Lisa M. Pratt, a biogeochemist at Indiana University, said that the best analog on Earth might be the Siberian permafrost. “This is very speculative, because we really have no idea whether or not there are extant organisms on Mars or whether there ever was life on Mars,” Dr. Pratt said.

But on Earth, microbes can live in pockets of salty water that never freeze, or even if the water froze solid, organisms could go dormant and “patiently hang out near the surface until spring comes around again,” she said.

“If there were to be evolving organisms on Mars,” she said, “I don’t see any reason why they couldn’t adapt to that kind of seasonally available, very brief access to resources. You bloom quickly, you do what you need to do, and you go dormant.”