Is There Salt Water On Mars?

For decades, scientists have been on a quest to find liquid water on the surface of Mars and new images from the Mars Reconnaissance Orbiter may finally provide that evidence. 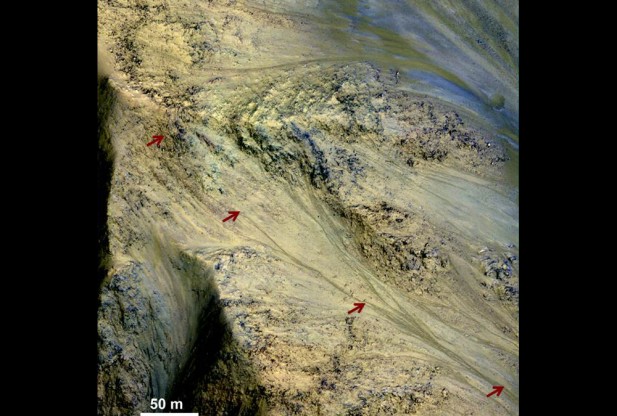 This image includes an especially long example of a type of dark marking that advances down some Martian slopes in warmer months and fades away in cooler months.

Newly released images from NASA clearly show dark streaks seasonally advancing down slopes close to the Martian equator, which space agency scientists say could be due to salty water.

“The equatorial surface region of Mars has been regarded as dry, free of liquid or frozen water, but we may need to rethink that,” said Alfred McEwen of the University of Arizona in Tucson, principal investigator for the Mars Reconnaissance Orbiter (MRO) High Resolution Imaging Science Experiment (HiRISE) camera.

First reported two years ago, the seasonal phenomena appear as finger-like features usually less than 16 feet wide that gradually extend down sheer, rocky slopes during spring through summer. They eventually fade in winter – only to return the next spring.

In a paper published online Tuesday in Nature Geoscience, the NASA scientists reported on five well-monitored sites found in Valles Marineris, the largest known canyon system in the solar system. At each of these sites, the seasonal features emerge on both north- and south-facing walls. On the north-facing slopes, they are most dynamic when the slopes receive the most sunshine. On south-facing slopes, the streaks begin to grow when the Martian seasons change and more sunshine hits their side.

The study team based their analysis on data from the Compact Reconnaissance Imaging Spectrometer for Mars and the Context Camera on the MRO, in addition to information from the Thermal Emission Imaging System experiment on NASA’s Mars Odyssey orbiter.

“The explanation that fits best is salty water is flowing down the slopes when the temperature rises,” McEwen said. “We still don’t have any definite identification of water at these sites, but there’s nothing that rules it out, either.”

If water on Mars were salty enough, it would be liquid at temperatures when purer water freezes and would evaporate slower – allowing the brine to flow farther. Researchers have also been monitoring the dynamic nature of water ice on the Martian surface with the MRO.

Impacts from small asteroids or bits of comets create many fresh craters on Mars every year. Five new craters were reported in 2009 and 15 other fresh craters are distributed across the planet.

“The more we find, the more we can fill in a global map of where ice is buried,” said Colin Dundas of the US Geological Survey in Flagstaff, Ariz. “We’ve now seen icy craters down to 39 degrees north, more than halfway from the pole to the equator. They tell us that either the average climate over several thousand years is wetter than present or that water vapor in the current atmosphere is concentrated near the surface. Ice could have formed under wetter conditions, with remnants from that time persisting today, but slowly disappearing.”

The newest observations add to information from earlier missions and surface landers that provided insights into the dynamics of Mars’ atmosphere and its interaction with the ground.