Moon Water Made by the Sun?

Long thought to be bone dry, the moon has recently been confirmed as relatively water rich. But a big question remains: Where did the wet—or more accurately, icy—stuff come from?

A new study might have the answer: The moon’s water may have, in a sense, sailed in on the solar wind. The discovery hints at a previously unknown method of delivering water to the inner solar system—and a new way to produce water and rocket fuel for future space missions. 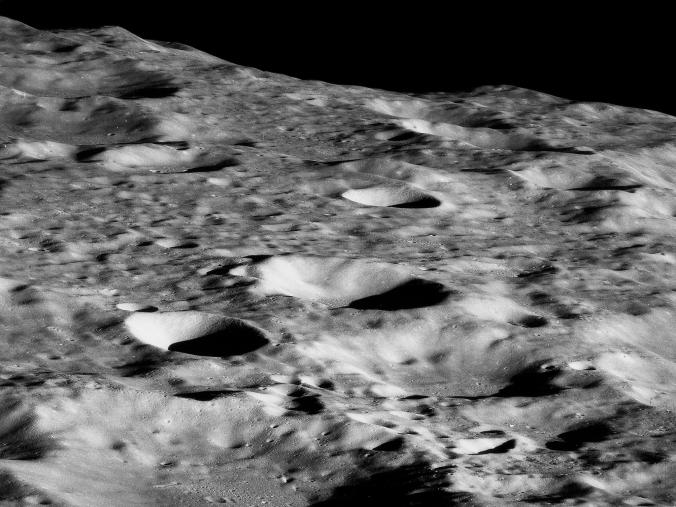 Until now the only known method of delivering water to inner solar system bodies such as Earth and the moon was through collisions with water-rich asteroids or comets from farther out in space—beyond the system’s “snow line,” where it’s cold enough for water to condense into ice.

But a team led by planetary scientist Yang Liu says it’s found another way, thanks to evidence of water and a water precursor molecule—hydroxyl—locked inside lunar soil samples brought to Earth by NASA astronauts. Water consists of two hydrogen atoms bound to one oxygen atom, while hydroxyl is one part hydrogen, one part oxygen.

Where, then, could moon water’s hydrogen have come from? The only plausible source, the researchers concluded, is the sun—the only deuterium-free body in the solar system.

The solar wind carries “normal” hydrogen to the moon, where the molecule reacts with oxygen already on the surface to form hydroxyl and water, according to the study, published online Sunday by the journal Nature Geoscience.

Don’t expect to find lunar ponds, pools, or puddles, Liu warns—the molecules the team studied are locked in the solid structure of the lunar soil.

But, she added, it may be possible to mine water from the soil or to break up the molecules into their constituent oxygen and hydrogen atoms to create rocket fuel—potential requirements for a lunar base.

“With the cost of $25,000 for taking one pint [half a liter] of water to the moon, it is essential that we develop processes of producing water from the materials on the moon,” study co-author Larry Taylor, a planetary geochemist also at the University of Tennessee, said in a statement.

Would it be worth the effort? That all depends on just how much water and hydroxyl typical lunar soil holds—just one of the remaining moon-water mysteries. “There are many unknowns,” Liu said, such as how the water is distributed across the moon, and to what depth.

The study, she added, has no bearing on the question of where Earth’s water came from, since our planet’s magnetic field largely deflects the solar wind.

The discovery does suggests, however, that the solar wind may play a role in water creation on other airless bodies in the inner solar system, such as asteroids and other moons—including places currently considered water unfriendly.

“Now our concept of the presence of water,” Liu said, “needs to be considered for new places in the inner solar system.”