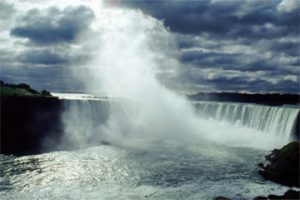 So how did our planet come to be covered with oceans, lakes and rivers? The simple answer is we still don’t know, but we have theories. One theory states that, nearly 4 billion years ago, millions of asteroids and comets slammed into the Earth’s surface; a quick glance at the moon’s crater-pocked surface gives us an idea of what conditions were like. The theory goes that these weren’t normal rocks but rather the equivalent of cosmic sponges, loaded with water that was released on impact.

While astronomers have confirmed that some asteroids and comets hold water, some scientists think the theory doesn’t. For one thing, scientists still haven’t found any remnants of the comets and asteroids. What’s more, they question whether enough collisions could have taken place to account for all of the water in Earth’s oceans. Finally, researchers from the California Institute of Technology found that water from the comet Hale-Bopp contains much more heavy water (which has more deuterium) than Earth’s oceans, meaning either the comets and asteroids that hit Earth were very different than Hale-Bopp, or Earth got its water some other way.

Another recent theory states that a young Earth was bombarded by oxygen and other heavy elements produced within the sun. The oxygen combined with hydrogen and other gases released from the Earth in a process known as degassing, forming the Earth’s oceans and atmosphere along the way.

A team of scientists from Japan’s Tokyo Institute of Technology has devised yet another theory, which states that a thick layer of hydrogen may have once covered the Earth’s surface, eventually interacting with oxides in the crust to form our planet’s oceans.

And so, while we can’t say with certainty how water came to Earth, we can say we’re fortunate it did.