Who owns the oceans?

Who owns the world’s oceans? It’s a legitimate question. We divvy up Earth’s terrain through war, conquest and colonization. We use rivers, mountains and entire continents to establish geographic boundaries on land. The oceans have no apparent surface features — just a flat, vast, briny expanse. They’re also all connected; the world’s five oceans are technically one single ocean that covers 71 percent of the planet. 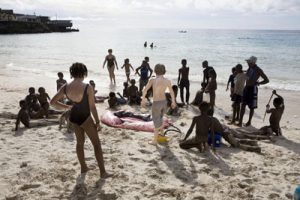 A few of the oceans’ owners enjoy the beach in Comoros, an archipelago in the Indian Ocean

This makes it difficult to divide, and so ultimately, you own the oceans. You and the rest of the 6.6 billion people swarming over Earth’s face right now. All of us own the oceans, and yet none of us do. It’s a conundrum.

For centuries, beginning with the Age of Exploration when ships were developed that could convey humans across the globe, the governments that represent people like you, the oceans’ owner, agreed that no one owned the oceans. This informal agreement was referred to as the Freedom of the Seas doctrine. This concept is also referred to more swashbucklingly as the Law of the Sea.

The doctrine granted exclusive rights to the three-mile buffer of ocean that abutted a coastal nation’s boundaries. These waters given to coastal countries extend those nation’s terrestrial boundaries into the sea; when any foreign nation enters these waters belligerently or without permission, it’s tantamount to an invasion of sovereign soil. The remaining majority of the sea was to be shared by all nations — including landlocked ones — for trade and commerce. Since the oceans are international waters, one nation attacking another’s ship on the open sea could be construed as an act of war.

This provision drew the United States into two wars: the War of 1812 and World War I. The United States took the Freedom of the Seas doctrine seriously and defended it with its military. But it was also the U.S. that ultimately undermined the doctrine when it unilaterally expanded its coastal waters in 1945 from three miles offshore to a 200-mile boundary that approached the continental shelf [source: Water Encyclopedia]. It set off a massive sea grab among coastal nations, and relations became tense among nations whose new enlarged marine boundaries overlapped.

At the root of this shift in perception of ownership of the world’s oceans was, as with most things, money.