The age of water

Most of the water used by people in Egypt comes from the Nile River, which originates from precipitation over mountainous areas in the Ethiopian highlands. In areas far from the Nile River Valley, however, where water is scarce and the population is growing, groundwater is the only available freshwater resource. 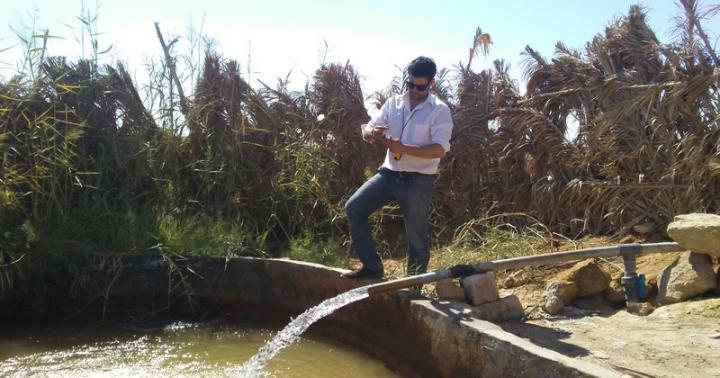 Knowing how much water is available in the groundwater aquifers and how fast it is being replenished is vital for providing the population with water for drinking and irrigation. Determining the age of water sources helps in those calculations.

A new study from the University of Delaware looked at chlorine isotopes as chemical tracers to determine the age and origin of groundwaters from the Eastern Desert of Egypt. The research was led by doctoral candidate Mahmoud Sherif and Neil Sturchio from UD and Mohamed Sultan from Western Michigan University. The work resulted in a paper recently published in the Earth and Planetary Science Letters journal.

While groundwater provides only seven percent of the water demand in Egypt, Egyptian water authorities have recently given renewed attention to increasing its exploitation, especially in eastern Egypt, to mitigate the growing water stress and to accommodate agriculture projects.

To measure the age and origin of the groundwater, 29 samples were collected from different wells during several field expeditions in Egypt. The researchers used the long-lived radioactive isotope chlorine-36 to estimate the age of the groundwaters; this isotope forms in the atmosphere and travels to the earth and has a half-life of 300,000 years.

Sturchio, professor and chair of the Department of Geological Sciences in UD’s College of Earth, Ocean and Environment, said that the Eastern Desert is interesting because while it is still dry and arid, it gets more rain than the Western Desert of Egypt.

Because of this rain, the researchers were curious to see if the groundwater in the Eastern Desert might be generally younger than the water found in the Western Desert, but were surprised by their findings.

“In the shallow aquifers you would expect young water, perhaps 50-100 years old, because it’s coming down as rain and flowing out towards the Nile Valley,” said Sturchio. “But in some of these aquifers, Mahmoud found water that’s apparently 200,000 years old.”

Sturchio said that while the water is probably not actually 200,000 years old, the fact that it appears that way shows that older water from the Nubian Aquifer comes up along faults in the rocks and mixes in with the shallow water, carrying some of the older chlorine with it.

The water coming up from the deeper aquifer likely ended up there when the climate was much wetter — as far back as a million years ago — with abundant rainfall that caused a lot of water to seep into the ground and collect in the very thick, porous sandstone.

Sherif said that finding this natural discharge from the deep aquifers through these faults to the shallower aquifers is important for the developmental plan for the area.

“When we quantify the amount of water in the shallow aquifer, we have to consider the water coming up from the deeper aquifer,” said Sherif. “It’s an additional source and instead of drilling very deep wells, which is very expensive, the [Egyptian government] won’t have to. They can reduce the cost.”

Sturchio said that while Egypt is lucky that it has a lot of water from the Nile, there is only so much water that can be taken out of the river according to an international agreement. That is why it is critical in areas like the Eastern Desert to identify and use these groundwater resources.

“The young groundwater that comes down as rain and takes about 50 to 100 years to flow to the Nile is being used for irrigation in some places. But some of the water they’re pumping out comes from the much older groundwater in aquifer underneath,” said Sturchio. “You really want to know how much of that water you can pump out before you’re over-pumping it and using it up too fast. You don’t want to pump it out faster than it can replenish itself, ideally. Knowing the groundwater age is part of the basis for developing a good strategy for using it.”