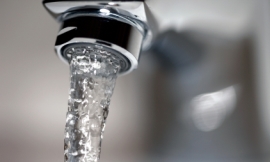 “PRB technology was first applied commercially in California in 1994, and today there are more than 200 barriers installed across North America, Europe, Japan, and Australia,” Mr Warner says. “It is now an accepted and proven technology for passively treating a wide variety of chemicals, including organic solvents, metals, and radionuclides.”

PRBs usually consist of an underground barrier filled with material to neutralise contaminants, built across the path of a contaminated groundwater plume. They are designed to intercept and clean up the water before it can enter aquifers used for urban supply, wells, lakes or shorelines. The barrier operates using the natural flow of the groundwater, without the need of power to run it.

“Contaminated groundwater exists on every continent and, particularly where sanitation is lacking or nonexistent, the contaminants can become well mixed with the local water supply,” Mr Warner says.

“Groundwater contamination continues to be a serious problem worldwide for urban, rural and undeveloped areas. Sources of contamination include not just industrial releases, but also runoff from agricultural lands, mining sites, landfills, and urban zones. Many cities primarily rely on ground water for drinking water and other potable uses and generally arid countries such as Australia have seen a rapid increase in the use of groundwater.”

The barrier may contain a range of low-cost materials designed to absorb or immobilise contaminants from the ground water as it passes through. These include bio-mulches for removing toxic metals and granular iron, which is used to destroy organic chemicals.

“PRBs are not the solution to every contamination problem. They must be designed for a specific site and its contaminants and are mainly effective at relatively shallow depths, up to 30 metres,” he says.

“Recent years have seen a number of advances in PRB design that can assure a long-lasting remedy. The modern PRB is quite reliable, providing the system is designed to work with the site specific conditions, including geological, hydrological, chemical and land use characteristics.”

Newer designs include the use of deep, and closely spaced large diameter borings filled with treatment media; mulch bio-walls that can be replenished, and dual-wall PRBs that can treat multiple contaminants. New methods for inject PRB material into deep systems, and one-pass trenching machines are also helping to reduce costs.

Mr Warner says that a PRB can pay for itself in a few years, in contrast to more costly pump-and-treat systems for cleansing groundwater which require energy to run them. Over a lifetime a PRB can save millions of dollars.

As the world’s city populations soar to 7 billion or more in the mid-century, this will create new uses for PRBs, he anticipates.

“While cities continue to grow, the expansion of the urban footprint to undeveloped areas, or the need to mitigate groundwater impacted by old mines, agricultural fields, or poor sanitation systems will continue to push research into new groundwater remedies; remedies that are economical, sustainable, resource conservative, and relatively easy to maintain and operate.

“The PRB is a key tool available for us to use to effectively remove contaminants from groundwater, while the water is still in the ground.”