Globalization, which refers to the increasing integration and interdependence of countries, is a major trend shaping world affairs around the globe. Never before has it been so likely that the bananas we eat, the music CDs we listen to, the shirts we wear, the cars we drive, and the movies we watch were produced in another country.

Globalization affects not only the production and consumption of products, but also culture, security, the environment , and the exchange of ideas. Globalization also has important implications for environmental challenges such as deforestation, climate change, pollution , biodiversity loss, and water resources.

Globalization is an abstract concept that refers to a complex process involving political, economic, and sociocultural changes. Certainly it is not a new process, because the world has been globalizing for several centuries. However, much has been written about its intensification since the 1990s. 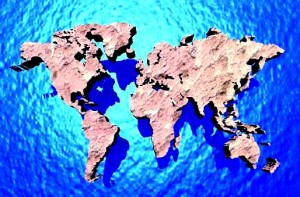 Many forces are acting to speed globalization trends. This acceleration is due to emerging technologies (particularly information and communication), deepening worldwide acceptance of markets, and increasing free-trade activity. Globalization can be viewed as the intensification of worldwide social relations, which link distant localities in such a way that local happenings are shaped by events occurring many kilometers away, and vice versa. Nations, international institutions, corporations, and individuals all are affected.

Globalization can be defined as “a process that deepens the extent and form of cross-border transactions among peoples, assets, goods and services and that deepens the economic interdependence between and among globalizing entities, which may be private or public institutions or governments.” Economic globalization has proceeded along two main avenues:

As globalization challenges nations, a backlash has grown against the effects of globalization trends. Protests against globalization have garnished much media attention. Since 1999, international meetings have been held in Seattle, Washington; Washington, D.C.; Davos, Switzerland; Nice,

Globalization refers to the intensifying trends that appear to be creating a “global village” out of our world. These globalization trends have important implications for the Earth’s environment, especially water resources.
France; and Quebec City, Canada, to name a few. Protests have caused some international organizations to postpone or even cancel their meetings. The water sector witnessed protesters at the Second World Water Forum in The Hague in 2000.

Globalization is extending the scope of public policy beyond national borders and public policy is increasingly becoming influenced by global conditions. The causes of public policy problems can often lie far beyond a country’s boundaries, leaving a nation to deal only the symptoms of a problem that lie within its decision-making power. This can easily be seen with transboundary water issues.

In a globalizing world, the types of public policy problems are increasingly complex as more and more policy issues cut across traditional disciplinary boundaries and bureaucratic expertise. Globalization also has the effect of shortening the amount of time that decisionmakers have to develop new policies and to make key decisions. Formal policy-making institutions—national legislatures, international law, government agencies, and multilateral institutions—often lack the speed and scope to obtain and use crucial information needed to formulate effective policy.
Impacts on the Environment and Water Resources

In a globalizing system, environmental policy issues are intricately bound together with issues of trade policy, human rights, and economic security. For example, the U.S.–Mexico border area has experienced an explosion of growth in response to international economic conditions and trade agreements in the 1990s, and the increased employment opportunities have led to a large influx of people into the border regions. These rapid changes in manufacturing and agricultural trends are greatly influencing water use as well as wastewater production patterns, and the potential implications of all these trends on water quality remain to be evaluated.

In the water resources sector, local water management issues are increasingly tied to events and people distantly located. For example, some private water utility headquarters are located thousands of miles away from the municipalities they manage; environmentally minded citizens halfway around the world mobilize to oppose the construction of dams; and multinational banks promote full cost recovery for water investments.

As globalization continues, environmental problems increasingly are being addressed through international management. In a complex global world, those concerned with the Earth’s environment now must be concerned with economic and institutional factors such as:

Globalization trends have affected the water sector, most notably by opening it up to significant competition and external influences. Water privatization activity has increased since 1997. Although all geographic regions have seen some water privatization, it has occurred predominately in Latin America and the Asian and Pacific Basin regions.

The privatization of previously public assets generates revenue from sales and promotes greater efficiency from revamped operations while promoting profits for the new owners. As a basic necessity of modern life, many corporations view water as a good investment. In many places, past fiscal mismanagement of the public sector’s provision of local water services has increased the appeal of privatization. On the other hand, privatization of water services has drawn criticism from those concerned with the accountability of large private corporations, the needs of the poor for basic services, and environmental integrity.

Trends toward free trade also affect water resources. The stated goal of free trade is economic growth and rising standards of living. Deregulation often is implied as well, and environmental problems can be exacerbated when environmental externalities are present.

The ability of nation–states to regulate environmental quality may be affected by the power that trade agreements confer upon corporations. The relatively weak level of existing national environmental policies and enforcement activities around the world amplifies this concern. The constraint 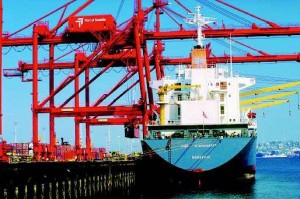 Globalization promotes the free movement and exchange of ideas and commodities over vast distances. International shipping plays a key role in the transport of products between countries.
of debt payments on developing governments and its tendency to encourage extractive industries to raise currency also is a concern, as these industries often affect water quality.

Globalization and trade have many important implications for both water quantity and quality. The unregulated taking of natural resources can lead to rapid depletion, as has occurred in extractive industries such as forestry and mining. Extracting water through pumping or diversion is a substantial concern in many places, because it can deplete the natural water supply if not managed properly (e.g., groundwater mining).

Water quality concerns can arise from extractive industries as well as from various manufacturing and agricultural production processes. For example, various pollutants generated as byproducts in the production of plastics, synthetics, pesticides, detergents, pulp and paper, and other materials can pose a water-quality and conceivably a human health hazard if not regulated and managed properly. The continued growth of large-scale, corporate agriculture implies an extensive use of pesticides and fertilizers. Production levels of toxic wastes also are a concern to environmental quality, particularly as trade in toxic wastes increases.
The Globalization Challenge

To deliver on its promises of higher living standards, globalization and free trade engender greater production activities in various locales selected to minimize the costs of production. As the economy is becoming a consolidated marketplace, transportation activities also increase. Under existing practices, both increased production and transportation are resulting in higher energy demands. This greater demand for energy can directly affect the hydrologic cycle, particularly as fossil fuels still dominate energy use.

Although the implications of climate change are uncertain, continued intensification of fossil fuel consumption potentially can disrupt hydrologic cycles on both local and global scales. Scenarios include changes in rainfall events, changes in the timing and magnitudes of extreme events (floods and droughts), shifts in runoff regimes, and modifications to groundwater recharge. Each of these outcomes would have significant water management implications.