Water in the Middle East

Water security has always been an issue in the arid environment that characterizes most of the Middle East. Not until recently, however, has it been so serious. Although the Nile, Euphrates, Tigris and Jordan Rivers provide substantial agricultural, industrial and commercial support, the longevity of this scarce resource is being tested daily. 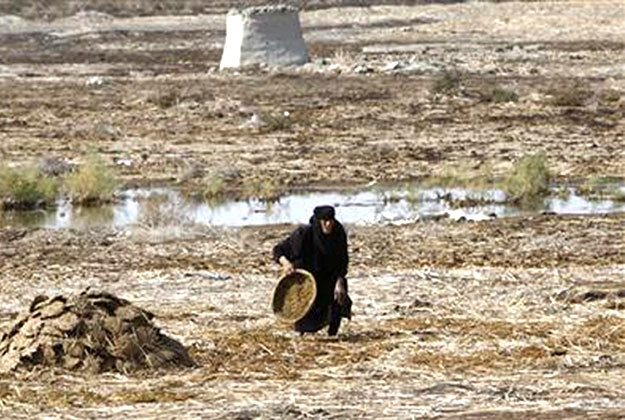 The rich landscape that was once referred to as the Fertile Crescent and the “breadbasket of the Roman Empire” is experiencing a variety of effects brought on by development and modernization. It is unclear what the future has in store, but what is certain, is that the politics of water is a turbulent issue that needs attention and support.

The River Nile is the mother of Egyptian civilization. In ancient times its waters could only be diverted through precise irrigation techniques. In modern times the larger scale of distribution has both positive and negative effects. For example, the building of the Aswan Dam in Upper Egypt stopped the annual flood from inundating the land. At the same time, however, preventing flood waters from reaching their usual plain inhibits the fertilization of the soil. This is because the nutrient rich waters of the Nile were once deposited as far as flood waters would reach. Presently, it is necessary to use artificial fertilization techniques that have detrimental effects on the Nile’s water quality and ecosystems. The construction of Aswan also had a negative impact on Egyptian society and history. During the construction and immediately after its completion, 10,000 Nubians were displaced because of flooding. In addition: the temples at Abu Simbel had to be moved; and 15% of the water in Lake Nasser is lost annually due to evaporation or poor Dam conditions. On the positive side, Aswan High Dam provides electric power for many Egyptians that otherwise would be left in the dark. 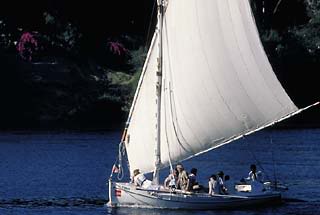 The Jordan River has religious, ecological and socioeconomic importance and is also in the midst of a crisis. Overuse, damming and diversion of its waters have polluted and shrunk the river to only about 5% of its historical flow. This particular crisis represents the difficulty- and necessity- of interregional cooperation between Jordan, Syria, Israel and the Palestinian territories. The minimum intake of water per person, per year in an efficient, moderately industrialized nation is about 1,000 cubic meters. The crisis of the Jordan River is clear: in Jordan, average intake in 1990 was 260 cubic meters per person annually; 2025 estimates predict an intake of less than 100 cubic meters. Similarly, the average Israeli had an intake of 470 cubic meters per person annually; 2025 estimates predict an intake of 310 cubic meters. Compounding the issue of water scarcity stemming from the Jordan River is the fact that 70% of Israeli water use is allocated to water intensive agriculture; with 25-40% of Israel’s water coming from an aquifer under the West Bank. Israel is pushing for green water initiatives, like less water intensive crop choices, water conservation and desalination, that could dampen the crisis situation. Not only does the River constitute an environmental and commercial crisis, but a human security situation is also present.

The Euphrates and Tigris Rivers are central to Turkey’s economic stability, providing hydroelectric power and improving irrigation techniques. The Southwest Anatolia Project is a series of dams on both rivers that have proven very successful. However, relocation of Kurdish populations, similar to what the Nubians experienced in Egypt, was required and caused resentment of the Turkish regime. Iraq and Syria both lay downriver from Turkey and experience the effects of water projects originating there. For example, the initial stages of construction for the Atatürk Dam cut the flow of the Euphrates to Syria and Iraq entirely for a month. This impacted regional relations so much that Syria began supporting the Kurdistan Workers Party (PKK), which is now labeled by some as a terrorist organization! Iraq was also affected by the project, facing problems ranging from reduced water flow to desertification and salinization of the soil.

Iraq’s water problems were exacerbated when Saddam Hussain embarked on a project to drain the marshes that housed Shi’a Arabs known as the Ma’dan, or Marsh Arabs, that had been living there for over 5,000 years. The Prosperity River was an artificial canal built to drain the water and that is responsible for destroying 93% of Iraq’s marshland and the livelihood of the Marsh Arabs. In 2004 the process was reversed and life is beginning to return to the marshes.

Southern Iraq (The Marsh Arabs) Maˤdān (Dweller in the Plains), Arab al-Ahwar (Arabs of the Marshlands) 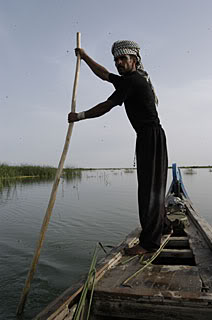 Saudi Arabia is the largest desalinated water producer in the world, contributing to 30% of global production. Water problems have been largely averted due to Saudi Arabia’s investment in research and development in large-scale desalination projects. These projects are funded by the Kingdom’s oil wealth. The Saudi government transports its desalinated water via a 2,500 kilometer pipeline network, 21 pumping stations, 131 depots and 10 stations for mixing the desalinated water with underground water. The desalination plant in Jubail is one of the largest of the 29 plants in Saudi Arabia. The finished product is used as drinking water, and for agricultural projects like the circular irrigated fields at Buraidah. These agricultural fields can be up to two miles across and are comprised of a variety of agricultural commodities.

The Great Man-made River is a project that the Qaddafi government in Libya has set out to accomplish. Libya may sit on the edge of the Sahara, but below its sands sits the freshwater Nubian Sandstone Aquifer System. Enormous pipes spanning thousands of miles are laid to bring the water from the aquifer to the population above.

It is clear that the scarcity of water has made life more difficult for many actors in the Middle East. Therefore, it is crucial that the region, coupled with outside support, analyze the lessons learned from the past, and agree on certain objectives and long term goals in order to employ the proper techniques in dealing with the politics of water and human security.