What is water dowsing?

“Water dowsing” refers in general to the practice of using a forked stick, rod, pendulum, or similar device to locate underground water, minerals, or other hidden or lost substances,and has been a subject of discussion and controversy for hundreds, if not thousands, of years. 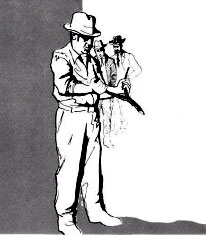 Although tools and methods vary widely, most dowsers (also called diviners or water witches) probably still use the traditional forked stick, which may come from a variety of trees, including the willow, peach, and witchhazel. Other dowsers may use keys, wire coathangers, pliers, wire rods, pendulums, or various kinds of elaborate boxes and electrical instruments.

In the classic method of using a forked stick, one fork is held in each hand with the palms upward . The bottom or butt end of the “Y” is pointed skyward at an angle of about 45 degrees. The dowser than walks back and forth over the area to be tested . When he passes over a source of water, the butt end of the stick is supposed to rotate or be attracted downward.

Water dowsers practice mainly in rural or suburban communities where residents are uncertain as to how to locate the best and cheapest supply of ground water. Because the drilling and development of a well often costs more than a thousand dollars, homeowners are understandably reluctant to gamble on a dry hole and turn to the water dowser for advice.

How did water dowsing begin?

Cave paintings in northwestern Africa that are 6,000-8,000 years old are believed to show a water dowser at work. The exact origin of the divining rod in Europe is not known. The device was introduced into England during the reign of Elizabeth I (1558-1603) to locate mineral deposits, and soon afterward it was adopted as a water finder throughout Europe. Water dowsing seems to be a mainly European cultural phenomenon; it was carried across the Atlantic to America by some of the earliest settlers from England and Germany.

What does science say about dowsing?

Case histories and demonstrations of dowsers may seem convincing, but when dowsing is exposed to scientific examination, it presents a very different picture. The natural explanation of “successful” water dowsing is that in many areas underground water is so prevalent close to the land surface that it would be hard to drill a well and not find water. In a region of adequate rainfall and favorable geology, it is difficult not to drill and find water!

Some water exists under the Earth’s surface almost everywhere. This explains why many dowsers appear to be successful. To locate ground water accurately, however, as to depth, quantity, and quality, a number of techniques must be used . Hydrologic, geologic, and geophysical knowledge is needed to determine the depths and extent of the different water-bearing strata and the quantity and quality of water found in each . The area must be thoroughly tested and studied to determine these facts.