Adhesion and Cohesion of Water

I used to wake up in a cold sweat in the middle of the night because I could not get the concepts of water adhesion and cohesion clear in my mind. If you have that problem, too, then do yourself a favor and read on to learn about these important properties of water. 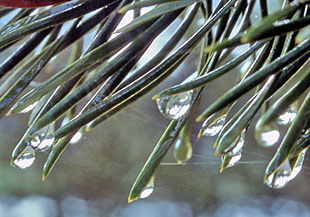 It is easy to see that the drop seems to have a “skin” holding it into a sort of flattened sphere (although there is nothing flat about a water drop in outer space.). It turns out that this surface tension is the result of the tendency of water molecules to attract one another.

The natural form of a water drop occurs in the “lowest energy state”l, the state where the atoms in the molecule are using the least amount of energy. For water, this state happens when a water molecule is surrounded on all sides by other water molecules, which creates a sphere or ball (perfectly round if it was in outer space). On Earch, the effect of gravity flattens this ideal sphere into the drop shape we see. Although you may have heard of a “skin” where water meets the air, this is not really an accurate description, as there is nothing other than water in the drop.

Why is water sticky?

Water is highly cohesive—it is the highest of the non-metallic liquids. Water is sticky and clumps together into drops because of its cohesive properties, but chemistry and electricity are involved at a more detailed level to make this possible. More precisely, the positive and negative charges of the hydrogen and oxygen atoms that make up water molecules makes them attracted to each other. If you’ve played with bar magnets you will know that the positive (+) pole of one magnet will repel the other positive pole, while a negative (-) pole of one magnet will attract the positive pole of the other magnet. Positive charges attract negative charges.