Sea ice is frozen seawater that floats on the ocean surface. Blanketing millions of square kilometers, sea ice forms and melts with the polar seasons, affecting both human activity and biological habitat. In the Arctic, some sea ice persists year after year, whereas almost all Southern Ocean or Antarctic sea ice is “seasonal ice,” meaning it melts away and reforms annually. While both Arctic and Antarctic ice are of vital importance to the marine mammals and birds for which they are habitats, sea ice in the Arctic appears to play a more crucial role in regulating climate. 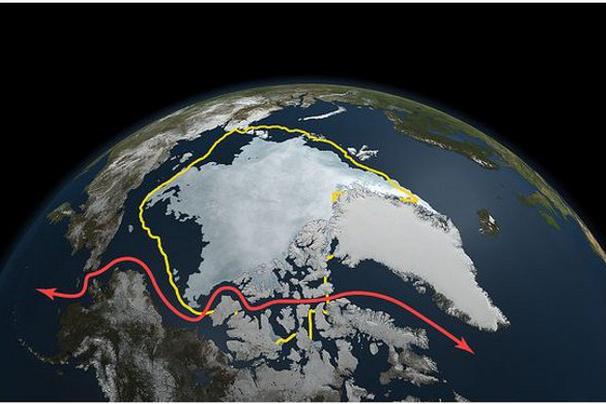 Because they are composed of ice originating from glaciers, icebergs are not considered sea ice. Most of the icebergs infesting North Atlantic shipping lanes originate from Greenland glaciers.

Sea ice regulates exchanges of heat, moisture and salinity in the polar oceans. It insulates the relatively warm ocean water from the cold polar atmosphere except where cracks, or leads, in the ice allow exchange of heat and water vapor from ocean to atmosphere in winter. The number of leads determines where and how much heat and water are lost to the atmosphere, which may affect local cloud cover and precipitation.

The seasonal sea ice cycle affects both human activities and biological habitats. For example, companies shipping raw materials such as oil or coal out of the Arctic must work quickly during periods of low ice concentration, navigating their ships towards openings in the ice and away from treacherous multi-year ice that has accumulated over several years. Many arctic mammals, such as polar bears, seals, and walruses, depend on the sea ice for their habitat. These species hunt, feed, and breed on the ice. Studies of polar bear populations indicate that declining sea ice is likely to decrease polar bear numbers, perhaps substantially (Stirling and Parkinson 2006).