The animals were thought to have moved away from the shallow waters of Loch Carnan in South Uist, but returned later on in the day. 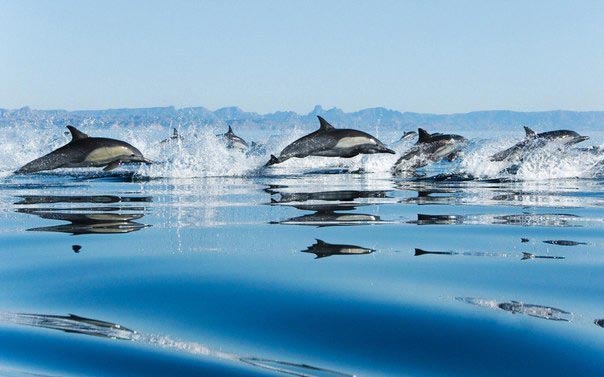 However, marine experts said the whales have not been seen since yesterday evening and are now thought to have left the loch. Their apparent departure follows the death of one of the animals, whose body was discovered on an island in the loch.

A post-mortem examination carried out on the whale has suggested it died of an infection. Dave Jarvis, of the charity British Divers Marine Life Rescue (BDMLR), said: “It appears that what has been witnessed is a group of these extremely social creatures accompanying an ill individual and that the infection may have caused this animal to strand.

“Despite an extensive search, there have been no sightings of the remainder of the pod since last evening.

“Unfortunately, due to the increasingly worsening weather conditions, it has proved impossible to utilise a helicopter to assist in this exercise.”

The animals were first spotted around Loch Carnan, in the Western Isles, on Thursday, sparking fears they would die in a mass stranding. Some of the animals had injuries to their heads and a substantial operation to save them was launched.

Mr Jarvis said the operation was now being wound down in light of the latest developments, but that those involved in the operation would continue to keep an eye out for any sign of the whales.

He said it was not known where the animals have gone.

Scotland’s new environment minister, Stewart Stevenson, said he was “pleased” the whales appeared to have moved on. The Scottish Government had loaned rescuers a fisheries protection boat, MPV Hirta, to follow the animals’ movements.

Mr Stevenson said: “The loss of life is very unfortunate but a number of teams working together in South Uist has ensured that a greater tragedy has been averted.

“Given the death of one whale, and clear injuries to a number of other animals, the MPV Hirta will continue to search for the pod and provide monitoring assistance.”

BDMLR said the post-mortem examination of the dead whale found “potential evidence of an infection” in the animal’s melon, a fatty organ found in the forehead.

It also showed that external injuries to the whale were not enough to cause its death. Tests showed the female whale was just coming to an end of a lactation and rescuers said they hoped her young calf would have been fully weaned.

Rescuers said wounds spotted on some of the other whales would heal naturally over time. The preliminary post mortem examination was carried out by Dr Andrew Brownlow of the Scottish Agricultural College.

Further tests are due to be carried out to find out the extent of the infection.

At the end of October last year, some pilot whales almost got stranded in the same sea loch. Less than a week later, 33 whales, believed to be the same group, were found dead on a beach in Co Donegal.

Pilot whales prefer deep water but come inshore to feed on squid, their main food. Rescuers later confirmed that a second whale has been found dead in Loch Carnan.

BDMLR said it is thought the animal died elsewhere and floated into the area on the tide.

The charity said the cause of death is not yet known. Mr Jarvis said: “During the late afternoon, BDMLR operations manager Stephen Marsh was alerted to a possible sighting of a second dead whale in the sea loch.

“A search was mounted and sadly the sighting was confirmed.

“It was too dangerous to recover the body of the adult, although another attempt might be made tomorrow, although it was noted that there seemed to be little damage to the parts that were visible.

“Due to its location and orientation, it is thought that the creature probably died elsewhere in the area and floated in on the incoming tide.

“It is currently impossible to comment on why this animal died.”