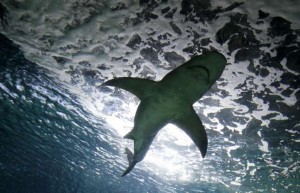 Marine biologists and ecologists in Panama recommended the adoption of urgent changes in fisheries in the countries of Central America in order to save sharks, more and more scarce in the Pacific.

He recalled that aboard industrial ships and artisanal , scientists weighed and measured thousands of sharks. Of 18 species studied, five are in “critical condition” at the global level.

In fact, 96 percent of the catch in Panama of the hammerhead shark (Sphyrna lewini), the most valued by Central Americans fishermen are infants or juveniles.

Official reports indicate that from the 2000 to 2010 were taken over 4,000 tons of sharks a year in this country, but the catches have fallen 60 percent, due to resource depletion.

Guzman considered possible to stop the “slaughter” of the big fish, through the protection and breeding areas.

Zuleika Pinzón, executive director of the nongovernmental MarViva Foundation, said the capture of species in the juvenile stage threatens the sustainability and insisted on the preservation of of the hammerhead shark (Sphyrna lewini), in danger of extinction.

In turn, the biologist Yehudi Rodriguez of the Aquatic Resources Authority of Panama (ARAP), questioned the catch of small sizes sharks , converted into raw material for the preparation of marinated meat dishes such as ceviche.

She warned that some species like the bull shark (Carcharhinus leucas) and tiger sharks (Galeocerdo cuvieri), are almost not present in the ecosystem in Central America.

Rodriguez acknowledged that the regulation of fisheries is a complex issue, but said that it has to change the mechanisms of capture, convert to breeding areas in protected areas and promote responsible consumption of products from the sea.