An ocean current can be defined as a horizontal movement of seawater in the ocean. Ocean currents are driven by the circulation of wind above surface waters, interacting with evaporation, sinking of water at high latitudes, and the Coriolis force generated by the earth’s rotation. Frictional stress at the interface between the ocean and the wind causes the water to move in the direction of the wind. 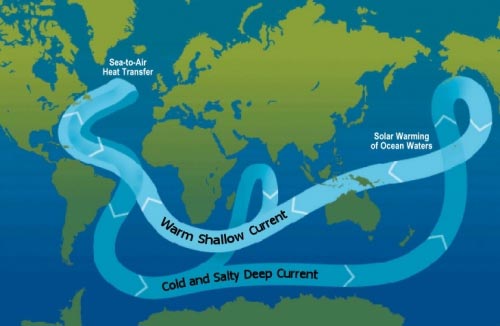 Ocean Circulation Conveyor Belt. The ocean plays a major role in the distribution of the planet’s heat through deep sea circulation. This simplified illustration shows this

Large surface ocean currents are a response of the atmosphere and ocean to the flow of energy from the tropics to polar regions. In some cases, currents are transient features and affect only a small area. Other ocean currents are essentially permanent and extend over large horizontal distances.

On a global scale, large ocean currents are constrained by the continental masses found bordering the three oceanic basins. Continental borders cause these currents to develop an almost closed circular pattern called a gyre. Each ocean basin has a large gyre located at approximately 30° North and one at 30° South latitude in the subtropical regions. The currents in these gyres are driven by the atmospheric flow produced by the subtropical high pressure systems. Smaller gyres occur in the North Atlantic and Pacific Oceans centered at 50° North. Currents in these systems are propelled by the circulation produced by polar low pressure centers. In the Southern Hemisphere, these gyre systems do not develop because of the lack of constraining land masses.A typical gyre displays four types of joined currents: two east-west aligned currents found respectively at the top and bottom ends of the gyre; and two boundary currents oriented north-south and flowing parallel to the continental margins. Direction of flow within these currents is determined by the direction of the macro-scale wind circulation interacting with the Coriolis force. Boundary currents play a role in redistributing global heat latitudinally.

Surface Currents of the Subtropical Gyres

On either side of the equator, in all ocean basins, there are two west-flowing currents: the North and South Equatorial (Figure 1). These currents flow between 3 and 6 kilometers per day and usually extend 100 to 200 meters in depth below the ocean surface. The Equatorial Counter Current, which flows towards the east, is a partial return of water carried westward by the North and South Equatorial currents. In El Niño years, this current intensifies in the Pacific Ocean.

Flowing from the equator to high latitudes are the western boundary currents. These warm water currents have specific names associated with their location: North Atlantic – Gulf Stream; North Pacific – Kuroshio; South Atlantic – Brazil; South Pacific – East Australia; and Indian Ocean – Agulhas. All of these currents are generally narrow, jet-like flows that travel at speeds between 40 and 120 kilometers per day. Western boundary currents are the deepest ocean surface flows, usually extending 1,000 meters below the ocean surface.

Flowing from high latitudes to the equator are the eastern boundary currents. These cold water currents also have specific names associated with their location: North Atlantic – Canary; North Pacific – California; South Atlantic – Benguela; South Pacific – Peru; and Indian Ocean – West Australia. All of these currents are generally broad, shallow moving flows that travel at speeds between 3 and 7 kilometers per day.

In the Northern Hemisphere, the east-flowing North Pacific Current and North Atlantic Drift move the waters of western boundary currents to the starting points of the eastern boundary currents. The South Pacific Current, South Indian Current and South Atlantic Current provide the same function in the Southern Hemisphere. These currents are associated with the Antarctic Circumpolar Current (West Wind Drift). Because of the absence of landmass at this latitude zone, the Antarctic Circumpolar flows in continuous fashion around Antarctica and only provides a partial return of water to the three Southern Hemispheric ocean basins.

Surface Currents of the Polar Gyres

The polar gyres exist only in the Atlantic and Pacific basins in the Northern Hemisphere. They are propelled by the counterclockwise winds associated with the development of permanent low pressure centers at 50° of latitude over the ocean basins. Note that the west-flowing current forming the southern margin of the polar gyres is also the eastward-flowing flowing current forming the northen margin of the subtropical gyres. Other currents associated with these gyres are shown on Figure 1. 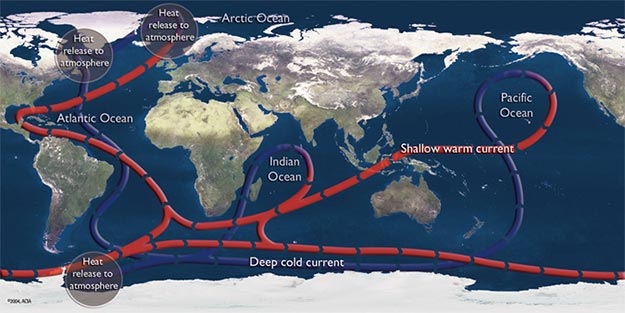 The world’s oceans also have significant currents that flow beneath the surface (Figure 2). Subsurface currents generally travel at a much slower speed when compared to surface flows. The subsurface currents are driven by differences in the density of seawater. The density of seawater deviates in the oceans because of variations in temperature and salinity. Near-surface seawater begins its travel deep into the ocean in the North Atlantic.

The downwelling of this water is caused by high levels of evaporation that cool and increase the salinity of the seawater as it flows poleward. The downwelling (sinking) of this cold, dense, saline water takes place between Northern Europe and Greenland and just north of of Labrador, Canada.

This seawater then moves south at depth along the coast of North and South America until it reaches Antarctica. At Antarctica, the cold and dense seawater then travels eastward joining another deep current that is created by evaporation and sinking occuring between Antarctica and the southern tip of South America. Slightly into its eastward voyage, the deep cold flow splits off into two currents, one of which moves northward. In the North Pacific and in the northern Indian Ocean, these two currents are drawn up from the ocean floor to its surface by wind-induced upwelling.

The water warms at the surface and forms a current that flows at the surface eventually back to the starting point in the North Atlantic, or creating a shallow flow that circles around Antarctica. One complete circuit of this flow of seawater is estimated to take about 1,000 years.