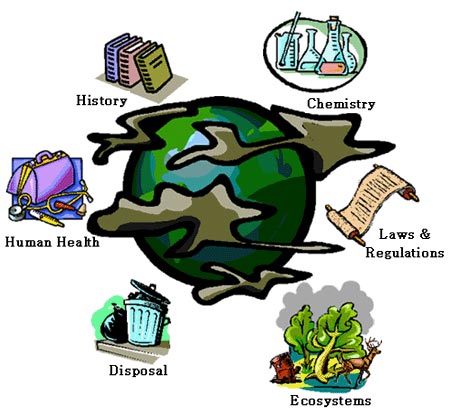 Some wastewater, fertilizers and sewage contain high levels of nutrients. If they end up in water bodies, they encourage algae and weed growth in the water. This will make the water undrinkable, and even clog filters. Too much algae will also use up all the oxygen in the water, and other water organisms in the water will die out of oxygen from starvation.

Surface water includes natural water found on the earth’s surface, like rivers, lakes, lagoons and oceans. Hazardous substances coming into contact with this surface water, dissolving or mixing physically with the water can be called surface water pollution.

When humans apply pesticides and chemicals to soils, they are washed deep into the ground by rain water. This gets to underground water, causing pollution underground. 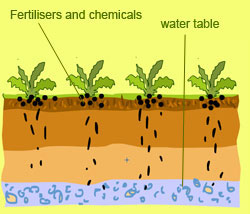 This means when we dig wells and bore holes to get water from underground, it needs to be checked for ground water pollution.

In many communities in the world, people drink untreated water (straight from a river or stream). Sometimes there is natural pollution caused by microorganisms like viruses, bacteria and protozoa. This natural pollution can cause fishes and other water life to die. They can also cause serious illness to humans who drink from such waters.

Some pollutants (substances, particles and chemicals) do not easily dissolve in water. This kind of material is called particulate matter. Some suspended pollutants later settle under the water body. This can harm and even kill aquatic life that live at the floor of water bodies.

Many industries and farmers work with chemicals that end up in water. These include chemicals that are used to control weeds, insects and pests. Metals and solvents from industries can pollute water bodies. These are poisonous to many forms of aquatic life and may slow their development, make them infertile and kill them.

Oil spills usually have only a localized affect on wildlife but can spread for miles. The oil can cause the death of many fish and stick to the feathers of seabirds causing them to lose the ability to fly.

Do you remember the BP Oil spill in 2010? (Read about it here) Over 1,000 animals (birds, turtles, mammals) were reported dead, including many already on the endangered species list. Of the animals affected by the spill that are still alive only about 6% have been reported cleaned, but many biologists and other scientists predict they will die too from the stress caused by the pollution.