All water on a surface of our planet forms an environment named as hydrosphere. The hydrosphere occupies the biggest part of its surface: more than 380 million km2, or more than 75 % (its general area is about 510 million km2). 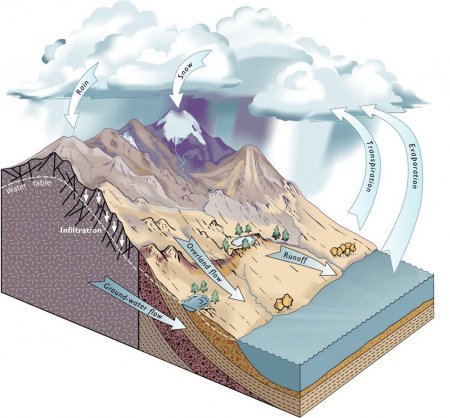 The characteristics of hydrosphere is usually begun from figure of 361,2 million km2 that is claimed to be the area of the surface of the Earth that is covered with water. But that is only the area of the seas and oceans, and all hydrosphere occupies larger territory.The less area of land is occupied by lakes and rivers – 2,3 million km2, or 1,7 %, and about 3 million km2 are marshes and strongly humidified grounds. Therefore water has appeared long before the development of life. And, apparently, first living organisms appeared in water, in the warm fine seas. Since then any life is closely connected to water; the major processes in the organisms of an alive being proceed with the participation of water solutions of various substances.

Continental water is basically under ground. The approximately half of it, 60 million cubic kilometers, is located on depth of tens and hundreds of meters from a surface. Impregnating porous rocks, it forms huge pools, which lay on water-proof layers. The deeply located underground water is pulled out on a surface through Artesian chinks under enormous weight of mountain weights. About 50 million cubic kilometers of water is concentrated in the top layers of a terrestrial surface, on the depth of several meters, and in ground. We see it in wells, deep ditches.

But water exists not only on our planet. It can be met in the structure of many space bodies.