Knowing where water vapor is in the atmosphere is one of many factors forecasters use to identify weather features. The NASA/NOAA GOES Project has now created two new types of animations based on satellite data that indicate where water vapor is moving over the Atlantic and Eastern Pacific oceans. 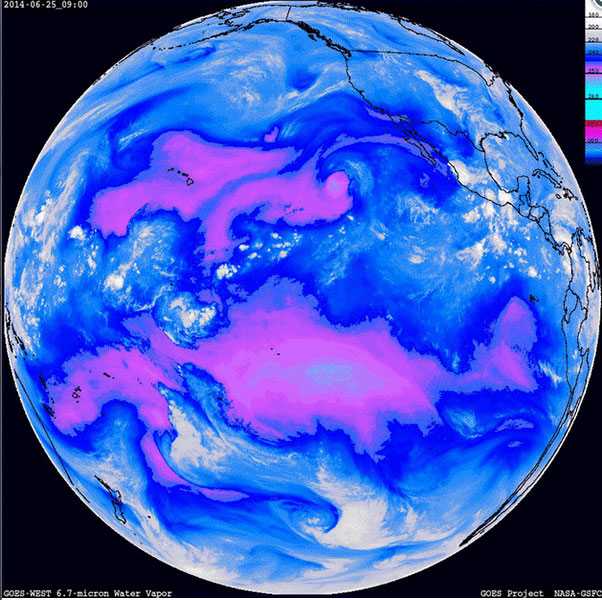 Observations from the National Oceanic and Atmospheric Administration’s Geostationary Operational Environmental Satellites (GOES) measure the local air temperature in kelvins (degrees Kelvin) at different layers of the atmosphere. “The different temperature ranges are color coded in the animations so that the magenta color indicates areas where clear, dry air penetrates lower in the atmosphere,” said Dennis Chesters, the flight project scientist for the NASA/NOAA GOES Program at NASA’s Goddard Space Flight Center in Greenbelt, Maryland. “These animations track mid-level dry-air winds that are otherwise unknown to weather forecasters.”

The animations also provide wind data in cloudless regions that can be beneficial to pilots and improve long-range weather forecasts. There is one image every three hours from the full-disk scans for the previous five days.

Chesters created the animations using data from each of the two GOES satellites to create water vapor movies of the Atlantic and Eastern Pacific oceans. The movies are created with data from GOES infrared 6.7 micron band. Chesters noted that at 6.7 microns, we see down only halfway into the atmosphere, roughly to the altitude that jet airlines cruise.

NOAA’s GOES-East (or GOES-13) and GOES-West (or GOES-15) sit 60 degrees apart in a fixed orbit over Earth and provide forecasters with a look at the movement of weather systems in the Atlantic and Pacific Oceans. The GOES satellites collect full disk images (showing one side of Earth) of the eastern and western sides of the Americas every three hours, providing eight views per day of the clouds over the entire Western Hemisphere. Overlaid on maps, the time-series of GOES cloud images provide a review of the large-scale weather. Where there are no clouds, the water vapor channel tracks the winds in the upper atmosphere.

In regions where the air is dry, the colors appear warmer and brighter because we can see deeper into the atmosphere. The edges of these dry slots often contain jet streams and turbulence between the air masses. Identification of jet streams is important for air travel. Jet streams can be helpful and detrimental to pilots, so the airline industry uses these water vapor images to adjust flight routes. A jet stream is a fast-moving horizontal or tubular current of air that primarily flows west to east. For example, airplanes can fly in the same direction as a jet stream and get a push. Conversely, to fly into a jet stream would require more fuel, take longer to travel and may be turbulent.

Another benefit of the animations is that they are also useful wind-tracers of the middle atmosphere over the open oceans, where there are no weather balloons. “Consequently, global ‘water vapor winds’ are estimated from the movement of these features and used in numerical weather models to improve long-range forecasts,” Chesters said. “For instance, the dry slot between Hawaii and Southern California sometimes spins up into a whirlwind that moves ashore and would surprise the southwestern U.S. if NOAA’s GOES-West satellite had not detected it.”

To see the GOES satellite animations, visit the NASA GOES Project webpage and click on “Upper-air water vapor movie.” The movies are downloadable from the site and updated every hour. NOAA manages the GOES program, establishes requirements, provides all funding and distributes environmental satellite data for the United States. NASA Goddard procures and manages the design, development and launch of the satellites for NOAA on a cost reimbursable basis.