ISS Experiment Studying How To Use Water To Start Fires

While water is typically used to help put out fires, astronauts currently serving on the International Space Station (ISS) are working on a special type of H2O that actually has the opposite effect, NASA officials revealed on Friday. 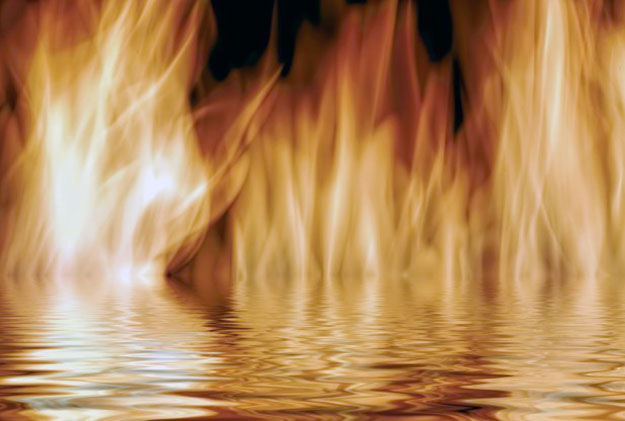 According to Mike Hicks of the Glenn Research Center in Cleveland, Ohio, the liquid is known as “supercritical water” and it is formed when ordinary water is compressed to a pressure of 217 atmospheres and heated to temperatures greater than 373 degrees Celsius – known as the critical point.

Under those conditions, regular water becomes something that does not fit into any of the three basic states of matter. Rather than being a pure solid, liquid or gas, Hicks explains that it becomes more of a “liquid-like gas,” and when it is mixed with organic materials, it undergoes a chemical reaction and oxidizes.

“It’s a form of burning without flames,” Hicks explained, noting that the substance is especially useful when it comes to disposing of unwanted materials such as sewage. Municipalities, corporate farms, maritime vessels and manned spacecraft could benefit from this type of treatment, explained NASA’s Dr. Tony Phillips.

“When we push a wet waste stream above the critical point, supercritical water breaks the bonds of the hydrocarbons. Then, they can react with oxygen,” Hicks said. Essentially, this means that the mixture of fluids and pulverized solids (also known as slurry) ignites in a clean form of fire that produces H2O and CO2, but not any of the toxic waste products typically produced by the burning process.

As it turns out, the microgravity laboratory on the ISS has proven to be an ideal place to study the properties of supercritical water. NASA and CNES, the French space agency, have joined forces to study the substance through the space station’s Super Critical Water Mixture experiment.

One of the issues with this fire-starting substance is the fact that any salt dissolved in water quickly precipitates out when it reaches or surpasses the critical point. Were this to happen in a reactor vessel, its metallic components would become coated with salt, which would cause them to corrode.

“In any realistic waste stream, we have to learn how to deal with salt. It’s a major technological hurdle,” said Hicks, the principal investigator of the experiment. “By studying supercritical water without the complicating effects of gravity, we can learn how precipitating salts behave on a very fundamental level. “We might even be able to figure out how to draw salt away from corrosion-sensitive components.”

The Super Critical Water Mixture experiment began during the first week of July 2013 and is scheduled to last one year in a series of six, 15-day test runs. It uses French-built equipment currently located in the Japanese Experiment Module of the ISS, and according to NASA, the US Navy and the city of Orlando, Florida have already begun using supercritical water technology to purify waste systems and for processing municipal sludge, respectively.