The warming waters of one of central Europe’s most popular holiday destinations, Switzerland’s Lake Zurich, have created an ideal environment for a population explosion of algae including Planktothrix rubescens, a toxic cyanobacterium. It has the potential to harm humans, animals and the tourism that pumps up the economies of lake districts. 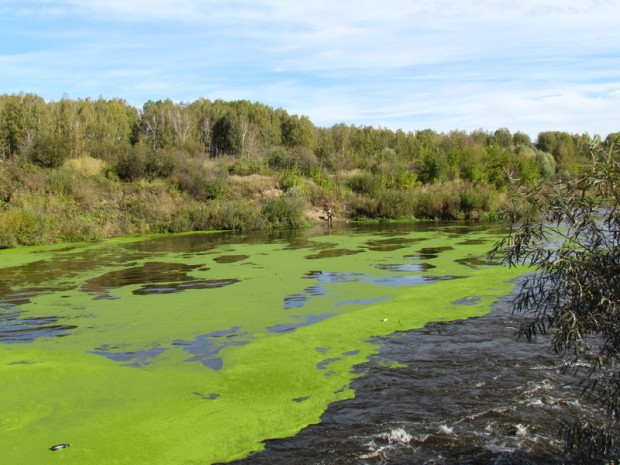 Although harmful algal blooms have been documented for more than a century, recently the number and frequency of cases have drastically increased.

According to research published in leading scientific journals, Lake Zurich is by no means alone. Cyanobacteria now threaten the ecological well-being of some of the world’s largest water bodies, including Lake Victoria in Africa, Lake Erie in the United States and Canada, Lake Taihu in China, the Baltic Sea in northern Europe, and the Caspian Sea in west Asia. They’ve also been found in Lake Kokotel in eastern Siberia, which is next to Lake Baikal, the world’s largest, deepest and most ancient freshwater lake. Baikal contains 20 percent of the world’s total unfrozen freshwater reserve.

Cyanobacteria blooms have been associated with mass fish kills, wildlife mortality, and liver failure and irreversible neurological disease in humans.

Most algae need a lot of phosphorus to live, while others also need nitrogen. There is no better source of phosphorus than untreated sewage. Since the 1970s, local governments in Europe and elsewhere have implemented extensive sewage treatment programs.

A lake restoration program at Lake Zurich effectively eliminated phosphorus-rich pollution caused by sewage and fertilizer runoff from lakeside towns and tourist areas. Once phytoplankton and algae were deprived of a needed nutrient, scientists and hydrologists reasoned, the toxic blooms would be a thing of the past.

For a while, it seemed the lakes were once again going to be clear, safe and attractive to vacationers. But researcher Thomas Posch, a scientist at Lake Zurich’s Limnological Station, part of the Institute of Plant Biology at the University of Zurich, discovered that despite decades-long remediation efforts, certain toxic phytoplankton populations are once again on the rise.

Posch has been studying Lake Zurich for more than a decade. He found that increasing average air temperatures and ensuing changes in surface water temperature have provided P. rubescens the ideal conditions to live and bloom in near-epic proportions.

“During the 1940s through the 1950s, all of the lakes in western Europe were affected by raw sewage,” Posch said. “Then in the 1970s, we started to treat wastewater. Problem solved.” Or, he added, so we thought. His measurements have shown that since 1990, despite the drastic decrease in phosphorus, the whole lake biomass of P. rubescens has been rising. One reason is that P. rubescens doesn’t need a lot of phosphorus. It thrives on nitrogen.

When circulation dies, algae bloom
Another factor paving the way for the success of P. rubescens is the change in annual lake surface temperature. The greater the temperature gradient between the cold of winter and the warmth of summer, the more lake water mixes in a natural convection current. This cycle has kept algae populations in balance for eons.

As the surface warms after a frozen winter, nutrient-rich, oxygen-depleted water at depths below 100 meters rises to the surface and reoxygenates. Warmer, oxygen-rich water circulates to the bottom, completing the cycle. But as the climate warms, the lake surface stops freezing. Once that happens, the lake waters cease to mix.

Less mixing creates an ideal environment for P. rubescens, which is photosynthetic and thrives between the water’s surface and about 70 meters in depth, where sunlight is dim but still penetrates. P. rubescens is perfectly adapted anatomically to handle this environment. It has a gas vesicle that allows it to float at between 70 and 90 meters.

Under higher pressure, though, below 100 meters, the vesicle ruptures and the organism dies. In the past, normal mixing annually rotated these phytoplankton (a larger category of micro-organisms that includes cyanobacteria) below 100 meters, killing them off. Now, they’re not always mixed below their survival threshold.

As Posch put it: “Lake surface warming creates a fertilizing effect.” The results do not bode well, neither for Lake Zurich nor for many other lakes around the world.

Lake Garda in the southern Alps, part of a chain of deepwater lakes in northern Italy, also has a thriving population of P. rubescens. Nico Salmaso, a researcher at the Limnology and Fresh Water Ecology research group at Fondazione Edmund Mach, an agrarian institution, has studied this lake for many years. He says P. rubescens constitutes 85 percent of the cyanobacterial biomass found in the lake.

The health of Lake Garda and its neighbors in Italy’s northern Lake District, including lakes Como, Orta and Maggiore, is the foundation of the area’s economy.

“Lake Garda alone brings in over 25 million tourists a year,” Salmaso said. And then there is the much larger Lake Como, which also has a seasonal cyanobacterial bloom. Its presence, and the presence of other phytoplankton, makes lake water appear muddy and unappealing.

“All of these lakes were once oligotrophic,” Salmaso said, meaning low nutrient concentrations, little plant growth, not supporting life. “The only way to control the cyanobacteria is by controlling the external nutrient load.”

A successful remediation effort at Lake Maggiore has restored that lake to near-oligotrophic status. With the help of a huge inflow of money from the European and Italian governments, residents and visitors hope to see the same in Lake Garda.

A toxic legacy
P. rubescens and its close cousins in the algae and phytoplankton world, including several other kinds of cyanobacteria, threaten people in ways that are far more serious than soupy-appearing waters.

“Cyanobacteria produce hepatotoxins as well as neurotoxins,” Salmaso said. “There is huge concern at the European level in different [subalpine] lake typologies. In Europe, animals are already dying in certain badly affected lakes. A little cyanotoxin can go a long way, and you don’t want that.”

Cyanobacteria are also now suspected to be at the root of major neurological diseases, long thought to be caused by inherited genetic mutation.

In a landmark scientific paper, researcher Paul Cox and his colleagues, now at the Institute for EthnoMedicine in Jackson, Wyo., found that cyanobacteria produce a neurotoxic amino acid known as BMAA. It has been found in the brains of patients with amyotrophic lateral sclerosis (ALS), Alzheimer’s disease and Parkinson’s disease. Epidemiologically speaking, this correlation is hardly far-fetched.

In areas surrounding Lake Mascoma in New Hampshire, researchers mapping new ALS cases found the prevalence of the disease to be 10 to 25 times the normal rate among patients who lived in areas with known cyanobacterial blooms. In southern France, where a substantial cluster of ALS cases has occurred, researchers found high BMAA levels in oysters, a favorite local delicacy, which concentrate the toxin.

Although scientists shy away from ascribing direct causality between particular micro-organisms and a specific cluster of disease outbreaks, it is clear to many observers that climate change is making the world a friendlier place to some organisms that can cause harm. The evidence for a causal effect between cyanobacteria and the incidence of ALS, Parkinson’s disease and Alzheimer’s disease is slowly but surely mounting.