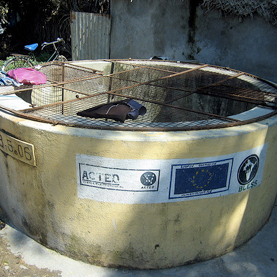 Indore is the fastest-growing city in the central state of Madhya Pradesh, India. The industrial center has grown rapidly in the past 20 years, reaching a population of nearly 3.3 million people. But as the city grows in numbers, its water supply becomes increasingly insecure.

Like many cities in the developing world, Indore’s water infrastructure and institutions face the mounting pressures of population and growth and urbanization. Experts worry that global warming will compound these problems, enlarging a category of people they call the “water poor.”

To better understand the complexity of urban water systems in less developed nations, the Pacific Institute and the Institute for Social and Environmental Transition released a detailed analysis last week on the water situation in Indore. The three-year study involved downscaling climate models to the city level, performing a vulnerability analysis, and engaging with the community to come up with resilience strategies.

The climate assessment suggested that Indore can expect an increase in surface temperature of 2 to 4 degrees Celsius by 2046 to 2065. It also showed the potential for putting existing water supplies on a roller coaster, with a several-inch increase expected in rainfall in some years compared to the annual average, as well as some years of decrease over the same period.

What the modeling really made clear, said Meena Palaniappan, author of the report and director of the Pacific Institute’s International Water and Communities Initiative, was that Indore needs to prepare for a wide range of water threats.

“It’s quite likely that the intensity of both floods and droughts will be an issue, so it’s really about how do we plan given the uncertainty and increased variability, which are the only guarantees we have,” said Palaniappan.

Indore Municipal Corp. (IMC), the formal government-run water system, is responsible for capturing, treating and delivering water to users within the city through a piped system. But IMC only serves 54 percent of the population, and the 16 percent of people who live in informal settlements get less than the minimum 40 liters of water per capita per day, as specified by the government of India.

The unreliability of the public system has given rise to the private water market. Residents of Indore have taken water management into their own hands, and backyards, by tapping into groundwater resources through privately owned boreholes in and around the city.

The practice is driven by profit, which, according to the report, creates incentives for more efficient water use. But a large portion of the population does not have any land tenure rights and is deprived of direct groundwater access. As a result, women and children must travel long distances to fetch water from private supplies, sapping energy and generating health problems.

Water from private sources is also more expensive. Studies show the poor across the developing world pay 20 to 40 times more per unit of water, said Palaniappan. Because of this economic burden, “water inequality perpetuates economic inequality,” she said.

“Every day the greatest task for me is to run around for water. If I spend most of my time in fetching for water, then my source of livelihood gets affected. I am caught between water scarcity and my only source of livelihood,” a woman who sells fruits and vegetables in the low-income area of Goma ki Phel is reported as saying in the report.

Climate change will only make the burden of finding water more difficult, “changing when, where, how much and how often water falls,” wrote authors of the report. So, for instance, should smaller, privately owned wells dry up, the masses that rely on them will only have the formal water sector to turn to, said Palaniappan, which will put even greater pressure on an already distressed system that’s stacked against the least unfortunate.

Warming will push people ‘right off’ the edge
“It’s really the urban poor that have the least ability to cope with increasing variability in water supply,” said Palaniappan. “They’re the ones that are just clinging on the precipice of water security, and climate change and increasing water variability just pushes them right off.”

Other factors also make people “water poor,” such as a lack of household and community water storage and poor water quality and sanitation. Conservation and efficiency is another a big issue. Decrepit public water delivery systems cause major water loss. According to Palaniappan, 30 to 60 percent of water across the developing world is lost in delivery process.

Authors of the Indore report recommend that all levels of government in India invest in urban water infrastructure to prevent wastage and expand the public delivery treated water to poor communities. Solving the inequality issue will also require restructuring subsidies on public water so they don’t favor the upper and middle classes and leave the poor with a hefty bill, said Palaniappan.

Better coordination among all water sectors and transparent and accountable leadership are also core to improving the resilience of urban water systems. Urbanization in the developing world is not simply a population increase. It’s a transition that changes the entire social and physical structure of an urban area. Seven million people are added to cities throughout India each year, and the dismal state of urban services in places like Indore will cause a great deal more suffering if governance is not adapted.

“Technical solutions to many of these [water] problems already exist,” said Marcus Moench, director of the Institute for Social and Environmental Transition and editor of the Indore report, in a statement. “The challenges to implementing them lie in the political economy of water supply, use, and management and regulation and enforcement — and the lack of political will and resource to get such solutions implemented.”