The High Costs of Free Water

When the well’s dry, we know the worth of water.
– Benjamin Franklin, Poor Richard’s Almanac, 1746 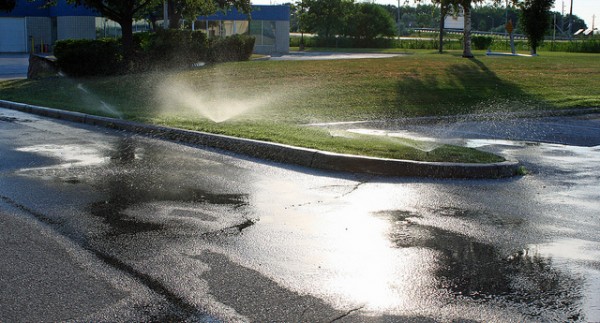 Watering the pavement, just one of many ways we waste water. Photo: Di Bédard, Flickr

The problem with water, many economists say, is the fact that it is essentially free.

That may come as a surprise to you if you receive a monthly bill from your local water utility.  But the economists are technically correct.  In most places in the world, we pay only for the cost of delivering the water to our homes or businesses, i.e., the cost of electricity to push it through distribution pipes, clean out impurities, or to construct a reservoir to store water.  The water itself is free. (See Ireland’s shift to charge at least something for water.)

Because the water itself doesn’t cost anything, its price doesn’t go up when water supplies become scarce, such as during the wicked droughts that are now wreaking havoc in the bread baskets of the U.S. and Russia, in the heart of Africa centered around Zaire and Uganda, or across India.  In the language of economists, water lacks a “price signal.” (See surprising photos of the drought.)

As a result, our use of water is free of one of the most powerful constraints on human behavior:  its expense.

We’ve all witnessed the power of a price signal when the cost of gasoline rises at the local filling station.  Gasoline consumption drops sharply.  High gasoline prices are so powerful that they can drive up sales of hybrid and other gas-efficient cars.

It’s really painful to pay more for anything these days, but when it causes us to use less it can help everyone get through a shortage.

Lacking a price restraint, water use has spiraled out of control in many parts of the world.  In water we are witnessing the “tragedy of the commons” that ecologist Garrett Hardin so presciently foretold in the journal Science in 1968.  The tragedy of the commons, wrote Hardin, is a dilemma arising from the situation in which multiple individuals, acting independently and rationally in their own self-interest, will ultimately deplete a shared limited resource, even when it is clear that it is not in anyone’s long-term interest for this to happen.

The result:  Once-mighty rivers like the Colorado, the Yellow, the Murray-Darling, and the Ganges are now regularly running dry, and vast aquifers like the Ogallala of the U.S. and the Arabian in Saudi Arabia are being drained rapidly. (See eight mighty rivers run dry.)

The Coca-Cola Company knows the perils of the tragedy of the commons.  It bit the company in the bum in 2004.

That year, local officials in Kerala, India shut down a $16 million Coke bottling plant blamed for groundwater declines that dried up the wells of many poor farmers.  In a case that has risen to the High Court of Kerala, the company has argued through extensive documentation, computer modeling, and expert testimony that its use of water played only a small part in the aquifer’s depletion.  Regardless of the legal outcomes in this case, anti-Coke protests that spread from India across U.S. and European university campuses certainly tarnished the company’s brand.  In response, the company has become one of the world’s most water-mindful companies today, investing heavily in water-protective measures in the watersheds where it operates.

In India and many other countries including the U.S., government subsidies have further weakened any cost constraints on water use.  The Indian government heavily subsidizes electricity costs that would otherwise restrain farmers from pumping groundwater unnecessarily. The federal government in the U.S. has subsidized the cost of dams and canals that supply water to western farms, amounting to a subsidy of $440 per hectare per year.

The subsidies on urban and agricultural water are in most cases well intended.  We should do everything possible to hold down the price of food and water, particularly for those that can ill afford it.  Our water pricing structures should subsidize water costs for those that most need the help.

But we have to do something to arrest the tragedy of the commons in water, and in the absence of other controls we need to better use the one effective lever we’ve got.  We need to create new pricing structures for water.

The costs of cheap water are far too high.  It has allowed for severe dewatering of the planet’s freshwater sources and caused sea level rise to accelerate.  Twenty percent of irrigated food production is at risk due to groundwater overdraft. Water shortages have pushed millions of hectares of farms out of production, and placed a significant chunk of global GDP at risk.  Because urban water utilities have not been charging enough to cover long-term maintenance costs, we are facing a trillion dollar debt to repair water infrastructure.

When the well goes dry, the fact that the water was free to begin with does no good for the farmer. Nor the rest of us.

If you ask an economist for a solution to a problem, you can bet that the answer will have money in it.  In his new book on The End of Abundance, economist David Zetland argues for the imposition of a scarcity premium on water pricing – a sliding scale that causes water to become more expensive as it becomes more scarce — as a way to prevent future water shortages.

There are other ways to manage water responsibly and sustainably other than to raise its cost, of course.  Governments could manage the allocation of water use such that our use does not exceed its natural replenishment.  Your bank doesn’t allow you to spend more money than you deposit.  But to date no government in the world has succeeded in controlling its water bankruptcy.

We could go on enjoying the gift of free water.  But you can damn well bet that you won’t be smiling when the debts of unsustainable water use finally come due.