SAN FRANCISCO (AP) — Call them the fortunate ones: Nearly 4,000 California companies, farms and others are allowed to use free water with little oversight when the state is so bone dry that deliveries to nearly everyone else have been severely slashed. 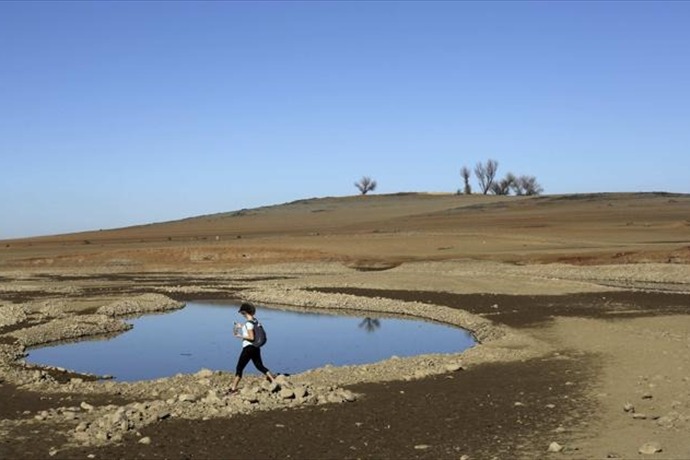 Their special status dates back to claims made more than a century ago when water was plentiful. But in the third year of a drought that has ravaged California, these “senior rights holders” dominated by corporations and agricultural concerns are not obliged to conserve water.

Nobody knows how much water they actually use, though it amounts to trillions of gallons each year, according to a review of their own reports by The Associated Press. Together, they hold more than half the rights to rivers and streams in California.
The AP found the state’s system is based on self-reported, incomplete records riddled with errors and years out of date; some appear to be using far less water than records would indicate.

With a burgeoning population and projections of heightened climate-related impacts on snowpack and other water supplies, the antiquated system blunts California’s ability to move water where it is most needed.

When gold miners flocked to the West in the 1800s, the state drafted laws that rewarded those who first staked claims on the region’s abundant rivers and streams. Today, California still relies on that honor system, even during drought.

“In a good year we wouldn’t be able to stand here unless we got wet. This year it won’t produce anything,” said second-generation rice farmer Al Montna as he knelt in the dust, pulling apart dirt clods on the 1,800 acres he left idle because of scarce water.

About 35 miles north, fourth-generation rice farmer Josh Sheppard had more than enough water, thanks to his water district’s superior rights to Feather River water dating to the late 1800s.

“No one thinks of it when there’s ample water and plenty to go around, but in these times of tightness it is a very contentious resource that gets fought over,” Sheppard said, standing next to his flooded fields.

To find out how many entities hold these superior rights and how much water they use, the AP obtained the water board’s database for 2010 — the last complete year of water usage reports — and interviewed state officials and dozens of landowners.

The state only collects the records every three years on a staggered basis, meaning its information is always out of date.

Tom Howard, the board’s executive director, acknowledged the state should get a better handle on water use. “Anything to improve the information we have would help,” he said, citing the need for annual reporting of usage and real time stream flow data.

While much of the water reported by this group is consumed by people or farms, some of the biggest users generate hydroelectric power for profit then return that water to the river for use downstream. The state doesn’t know how much is used for each purpose.

More than half of the 3,897 entities with active senior and riparian rights to water are corporations, such as the state’s biggest utility, Pacific Gas & Electric Co. which creates hydroelectric power, and the Hearst Corp., which has water rights for its remote, Bavarian-style forest compound called Wyntoon.

Also among the biggest rights holders are rural water districts and government agencies such as the water departments of San Francisco and Los Angeles.

San Francisco, whose water rights date to 1902 when its mayor nailed a handwritten notice on a tree, also uses free Sierra Nevada water to generate power for its airport, schools and firehouses.

This year, the state cut water deliveries to farmers and cities by 95 percent, and the federal government also imposed sharp restrictions on its water customers. But companies, farmers and cities with water rights that pre-date 1914 were exempt this year from mandatory cuts, even though they collectively are the biggest water users in the state.

The AP independently verified that just 24 of the rights holders reported using more than twice the volume of water that California’s vast system of state and federal dams and aqueducts ships to cities and farms in an average year.

As summer looms, some water scientists question the utility of conservation efforts that do not restrict consumption by most water users with old rights. “Obviously, senior water rights holders have the most to benefit from the current system,” said Peter Gleick, director of the nonpartisan Pacific Institute.

Those with century-old rights say the system works well because it provides a reliable supply of water. And in a drought, the state lets some of them sell any extra water, at the market rate.

The water board does not require monitoring or meters for users whose rights date back a century or more, or who have rights to draw from a waterway adjoining their land.

Rights holders have successfully defeated legal and legislative efforts to strengthen California’s oversight, said Andy Sawyer, an attorney with the board.

California made progress toward accountability in 2009, when a new law required rights holders to report their water use and gave the board power to punish them for failing to file statements properly. But the rights holders could gain exemption from the strict monitoring requirements in that law by convincing authorities it was too costly.

The water board doesn’t have staff to systematically check even obvious mistakes in the records, said Aaron Miller, a board senior engineer. He said the state nonetheless uses this inaccurate data to make decisions about when to grant new water permits.