A volcano is a place on the Earth from which magma and gases associated with magma flow through the Earth’s crust onto the surface, whether on land, in shallow waters along the shoreline, or under the sea. Scientists estimate that there are tens of thousands of active and dormant volcanoes on Earth, and thousands more extinct volcanoes. 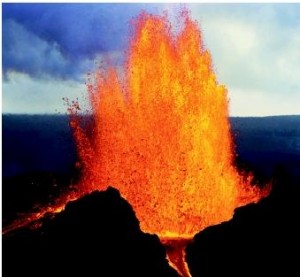 Water and volcanoes are closely linked. Water plays significant roles throughout the “life cycle” of magma: from its production deep within the Earth, to its fiery escape at a volcano, to its final cooling.

The making of a volcano requires magma, and the making of magma requires heat. In other words, rock that is deep within the Earth must melt before a volcano can form.

Most of the Earth’s interior, although hot, is solid. From experiments it is known that water decreases the melting point of rock. If water is introduced to regions deep within the Earth, then solid rock there may begin to melt.

Water is introduced into the deep Earth when oceanic plates descend beneath continental plates , a process called subduction . Oceanic plates, such as the Juan de Fuca plate off the Oregon and Washington coasts, have thick, water-laden sediments at their surface. When these plates subduct, some of the sediments are dragged deep beneath the continents.

As a plate descends, the pressures and temperatures it experiences increase, and the water-laden sediments are baked (metamorphosed) and squeezed into new types of rock. At about 100 kilometers (62 miles) in depth, these metamorphosed sediments are transformed yet again, and during this second metamorphism, water is released from the newly formed metamorphic rock.

The released water immediately vaporizes at these temperatures and pressures, and the vapor rises. As the vapor moves upward, it enters hotter rocks, since the deeper rocks have not had time to warm up to the surrounding temperatures and have cooled somewhat due to energy being removed as rising water vapor. These shallower rocks are so hot (1,300°C or 2,372°F) that they are near their melting points. The presence of the water in its vapor phase causes the melting point to decrease and the rock to melt and absorb the vapor. Thus, 100 kilometers (62 miles) beneath the western parts of Oregon and Washington, magma is forming.

The magma that is produced is less dense than the rock from which it melted. Therefore, once formed, the buoyant magma, full of dissolved water vapor and other gases, will slowly force its way toward the surface. As the magma rises, the pressure from the overlying rock is lessened and the magma loses its ability to hold dissolved water. Bubbles of water vapor and other gases, mainly carbon dioxide, start to form.

Hawaii’s Puu Oo, the easternmost of Kilauea’s craters, spews molten lava in a non-explosive eruption in 1985. Episodic lava fountains in the mid-1980s built a massive cone which partially collapsed in the late 1990s.

Viscosity can be described as a resistance to flow; for example, honey is more viscous than water because it flows more slowly than water. Viscosity in magma depends on two things: temperature and silica content. The higher the temperature of the magma, the lower the viscosity. The higher the amount of silica (which is present in all magmas), the higher the viscosity due to the ability of the silica to form chains (polymers) that link together and hinder the movement of the magma.

Examples of non-explosive eruptions can be seen on the island of Hawaii. The volcanoes on the Big Island spew lava of low silica content, called basalt. As this low-viscosity magma rises within a volcano to near the surface, water vapor in the form of gas bubbles will quickly come out of solution and cause a brief fountaining effect where bits of lava are spattered around the vent, causing a “spatter cone.”

The explosive eruption of Mount Saint Helens in the Cascades Range of western Washington blew off 375 meters (1,235 feet) of the mountaintop and rained ash as far as 800 kilometers (500 miles) to the east. The energy released by the May 18, 1980 eruption was equivalent to the explosion of 500 atomic bombs of the type dropped on Hiroshima, Japan during World War II.
When most of the water vapor has come out of solution, the eruption becomes less dramatic and the lava flows rapidly downslope. As the basaltic lava cools and the viscosity increases on its path away from the vent, the remaining water vapor bubbles find it increasingly difficult to rise to the surface of the lava flow. These last bubbles become trapped when the lava becomes solid and their shape is preserved as “vesicles” in the rock.

Although fountaining, as described above, may be spectacular, truly explosive eruptions occur with the more viscous magmas (andesite and rhyolite, which have a higher silica content). When the water vapor bubbles try to rise they are impeded by the linkage of silica chains in the magma and can rise only slowly. The rapid change in confining pressure as the magma body rises to the surface causes the dissolved water vapor bubbles to expand and escape explosively. Bubbles that form quickly in a large mass of viscous rhyolitic magma can shatter into a froth of tiny glass-walled bubbles, producing a rock called pumice. (A rock with larger bubbles is called scoria.)

In magmas with a high dissolved gas content, the rapid decompression associated with a quickly rising magma body can cause the gases to expand in a violent upthrust of a dense mixture of hot gas, lava, and rocks. (This phenomenon was seen at the eruption of Washington state’s Mount Saint Helens on May 18, 1980.) The mixture of gas and rocks rises quickly in the cool air, forming an eruption column that can rise up to 45 kilometers (28 miles) in height. Sometimes, eruption columns can collapse, producing a pyroclastic flow. Pyroclastic flows have proven to be one of the deadliest features of highly explosive eruptions due to the high speed at which they travel, riding on a cushion of air trapped below the collapsing column. They can engulf surrounding villages in hot, poisonous gases, rock, and ash.

When a volcano’s eruption ceases, the magma within the underground chamber will remain hot for hundreds or thousands of years. Circulating groundwater that comes into contact with the cooling magma is heated and rises to the surface along rock fractures to form either a thermal spring, fumarole, or geyser. Heated water from some thermal springs—for example, in Iceland, Italy, and New Zealand—are used to heat homes and businesses.

Sometimes deeply circulating hot groundwater dissolves minerals from the cooling magma. The dissolved minerals are then precipitated from the hydrothermal solution and deposited in the openings of the surrounding rock, usually filling cracks and sometimes replacing the rock itself. These deposits tend not to have great vertical extent but are exceedingly mineralrich. Many famous silver and gold deposits of the western United States, such as Comstock, Nevada and Cripple Creek, Colorado are examples of hydrothermal ore deposits.