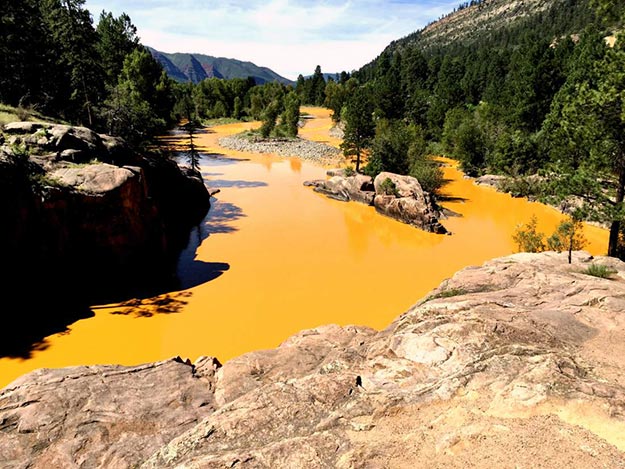 In fact, the striking sculptures of Malakoff Diggins State Historic Park are not the handiwork of Mother Nature, but of her children. Dating back a mere 140 years, their haunting if hideous beauty testifies to an early case of environmental assault—but one in which the good guys finally won. Here was fought one of the first successful environmental lawsuits in U.S. history.

When the cry of “Gold!” went up in California in 1848, the pioneering prospectors had little to do but pluck flakes and nuggets of gold out of streams. Those easy pickings didn’t last long. Miners then moved on to panning, in which gravel and water are gently rocked in a handheld pan until the water gradually carries away the gravel and leaves the heavier gold behind. Placer mining, panning on a grand scale, uses sluices and flumes to separate gravel and gold. Hard-rock mining tunnels into the earth to extract gold ore from buried veins.

Eventually, miners hit upon the cheapest way of “getting gold out of the secret places,” in Huie’s words. Hydraulic mining applied a simple method familiar to all who’ve used a garden hose. Direct a forceful stream of water at the earth, and it will carve a ditch and carry away the loosened soil. Harnessing water under powerful pressure thus could blast away the hillsides concealing gold ore. Then the water and earth could be fed through sluices and riffles to catch the gold. In the late 1860s, Julious Poquillon bought up cheap land along the Yuba River, where Huie and I are now standing, and the North Bloomfield Gravel Mining Company was launched.

“Hydraulic mining was born and raised here in California,” Huie is saying. “And no matter what you think of the result, it was a tremendous engineering feat.” The key to success was lots and lots of water, year-round, in dry seasons as well as wet. Engineers built a network of reservoirs, lakes, ditches and flumes extending as far as 40 miles to catch every precious drop of rain or Sierra snowmelt. Propelled by gravity along a vertical drop of up to 500 feet, the captured waters converged into a single, powerful stream. Then they were fed into water cannons trained on the gold-bearing hillside.

Huie leads me to one. “A single monitor [water cannon] with an eight-inch nozzle like this could direct 16,000 gallons of water a minute,” he says. “It could tear away 4,000 cubic yards of earth from the hillside every day.” Into the sluices went the result, out came the gold, and the rest was dumped into the Yuba and sent downstream.

And what a load the river carried! Tons and tons of earth, rocks, trees, shrubbery, silt and a mucky mixture of mud, sand and gravel known as “slickens.” The once-crystal Yuba turned chocolate brown. So did the Feather River, into which the Yuba emptied, and the Sacramento. The brown waters extended all the way to San Francisco Bay.

Who cared? What was the land for? Wrest what goodies you could and move on, was the get-rich-quick refrain. During the peak years of hydraulic mining in California, tens of thousands of men found work. By 1875, North Bloomfield had become a thriving settlement, complete with hotels, saloons, groceries and dry goods stores, breweries, a bank and a livery stable.

On the heels of the gold rush, however, had come other settlers. As early as 1873, downstream farmers began to protest the great glaciers of mud and silt that inundated their croplands every spring. As much as three feet of slickens would cover the rich wheat fields, destroy the fruit orchards, bury roads as fast as they were built. The towns of Marysville and Yuba City, at the confluence of the Yuba and Feather rivers, were repeatedly flooded. The bed of the Sacramento River rose 16 feet.

The miners brushed aside all complaints with arguments like those heard in environmental cases today. Regulation would be costly and bring ruin to a prosperous industry; miners would be thrown out of work; towns would be desolated. Besides, the mine owners were perfectly within their property rights. After all, didn’t they hold water rights to the land, granted by state law and federal patents? The rivers themselves belonged to everybody.

Lining up with the farmers was the Central Pacific Railroad (later the Southern Pacific). The politically powerful railroad not only counted on mud-free riverside tracks but was a large landowner throughout the valley. With its backing, the farmers made a federal case of the controversy, and in 1882, a New York resident and Marysville property owner, Edwards Woodruff, filed suit before Judge Lorenzo Sawyer.

Woodruff v. North Bloomfield Gravel Mining Company dragged on for nearly two years. Mountains of testimony told of losses to landowners like Woodruff and legal rights held by mining companies, with innumerable visits by the court and witnesses to observe the damage firsthand. In January 1884, Sawyer, who himself had come to California as a goldseeker, presented a 255-page decision. Hydraulic mining was not illegal, Sawyer wrote, but by dumping its tailings into the river, North Bloomfield not only violated the rights of those downstream but despoiled the landscape and watershed that were not its to destroy. The company could practice hydraulic mining on its own land but was required to impound the debris. It could no longer simply dump it into the river.

Hydraulic mining soon went into decline. Hydraulic mining’s residue, of course, continued to seep into the river, and the California Debris Commission monitored the debris dams for years.

The abandoned “diggins” became Malakoff Diggins State Historic Park in 1996. About 27,000 visitors a year drive down the twisting narrow road to admire the colorful formations. Most are campers and hikers, who peek in the restored general store, which closed in 1942 and still displays boots and shovels and miners’ gear left behind. Or they simply marvel at the last of the eight monster water cannons that once pulverized the hillside, day and night.

“It’s an irony, isn’t it?” Ken Huie is saying. He has just shown me a mile-and-a-half-long tunnel that drained the mine. “It cost the company about three and a half million dollars to construct all this. And all they got back, according to the best estimates, is three and a half million. For all the effort and the damage, they just about broke even.”