Yesterday, nations went to war for land. Today, our conflicts involve energy. And tomorrow, Brahma Chellaney writes, the battles will be about water. The award-winning author believes that Mark Twain was right when he said, “Whisky is for drinking, water is for fighting over.” 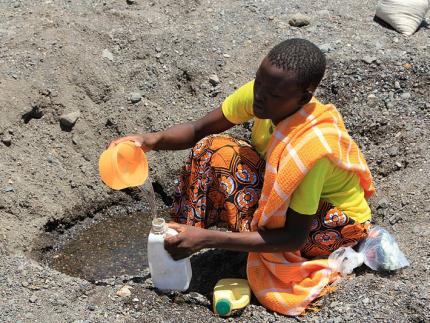 There is “blue water,” “green water,” even “virtual water.” But however labeled, water is the world’s single most important resource. Life is not possible without it. It will likely determine our future.

And it is becoming scarce. In the twentieth century, the world’s population grew by a factor of 3.8 and water use by nine. Today, with the number of people passing the seven billion mark, it should come as no surprise that more than half of humankind lives in water-stressed areas. That figure could increase to two-thirds during the next decade.

At this time, more than a fifth of the inhabitants of this planet do not have easy access to potable water. Scarcity causes illness, thereby making the lack of this resource “the greatest killer on the globe.” There are, incredibly, more people with a mobile phone than access to water-sanitation services. Already, bottled water at the grocery store is more expensive than crude oil on the spot market.

The Yemeni city of Sanaa, now home to two million, will be the first national capital to run dry in this century, if its groundwater reserves are depleted, which could happen as soon as 2025. Abu Dhabi and Quetta, experts believe, might also turn to dust. The international community should expect “water refugees” in just over a decade, Chellaney warns, and there could be two hundred million of them by the midpoint of this century.

So forget deforestation, climate change, or peak oil, and think about the coming crisis over “blue gold,” Chellaney advises. “The golden age of safe, cheap, and easily available water has come to an end in most parts of the world, replaced by a new era of increasing supply and quality constraints.”

Water creates instability in surprising ways. For example, Chellaney argues the Arab Spring was about water, at least in the large sense, as it was triggered by rising food prices caused by a “worsening regional freshwater crisis.” The crises caused by a lack of water are sometimes even more intricate and subtle. In one of the book’s more intriguing passages, we learn how South Korea’s persistent water shortages led to the toppling of Madagascar’s leader in 2009, indicating that this commodity can spread trouble from one part of the globe to another.

The real geopolitical challenge of water scarcity will be national competition for rivers, lakes, shorelines, and glaciers—a series of “water wars.” Chellaney’s fine work describes itself as “a study of the global linkages between water and peace,” but most of the book is an examination of the connection between water and conflict. “Hydropolitics” promises to become increasingly contentious and nasty.

So far, no modern war has been fought just over water, but water has been, the author believes, a factor in a number of them. Chellaney contends that the 1967 Six-Day War, for instance, was essentially a struggle for headwaters. Israel, he points out, ended up with control of the sources of the Jordan River, and he notes that Ariel Sharon, in his memoirs, emphasizes the role of water in the conflict. A water war was also hidden in the 1965 fighting between India and Pakistan, in mountainous Jammu and Kashmir. Pakistan’s military objective was to take an area where three rivers collected a substantial portion of their flows. In all, the United Nations counts thirty-seven cases of water-related violence between nations since the end of the Second World War.

Conflict over water arises in large part because it flows from one nation to the next or sits on top of geographical boundaries. Across five continents, there are two hundred and seventy-six transnational river and lake basins separating one hundred and forty-eight countries and accounting for three-fifths of the world’s river flows. Excluding Antarctica, almost half the planet’s land mass is covered by river basins spanning more than one country. And if that weren’t bad enough, there are at least two hundred and seventy-four underground freshwater basins beneath national borders. Some of these aquifers even encompass more than two countries.

Water rivalries (“rival” comes from the Latin rivalis, or “one who uses the same stream”) are growing, with some of them already taking on the character of “silent hydrological wars.” Antagonism and resentment inevitably follow when a dominant riparian, mostly but not always upstream, diverts water with little regard for neighbors, “commandeering shared resources,” as Water, Peace, and War puts it.

At the heart of this book is an analysis of water treaties. The United Nations claims that more than two hundred international water agreements have been signed since World War II, but Chellaney carefully notes that most of these deals are “structurally anemic.” The “toothless” agreements lack dispute resolution mechanisms and even monitoring rules. Moreover, most have no provisions formally dividing water among users and many do not include key basin states.

At this moment, there are only eighteen agreements with specific allocation provisions. Significantly, none of these arrangements was signed this century, and most of them were concluded “when serious water shortages were uncommon.” This suggests to Chellaney that similar deals will be hard to reach in times of increasing water stress.

He makes a good point. The 1997 UN Convention on the Law of the Non-Navigational Uses of International Watercourses, intended to become the world’s water law, is in trouble. It has yet to come into effect, lacking ratification by the minimum number of countries. Until more states sign on, most rivers and lakes will remain subject to free-for-alls among thirsty populations and nervous national leaders.

While Chellaney (whose previous book, Water: Asia’s New Battleground, won the Asia Society’s Bernard Schwartz Award last year) sees water-related conflict as a growing international threat, he does not believe that armed conflict over this one truly indispensable resource is inevitable. But preventing water wars, as he sees it, will require “rules-based cooperation, water sharing, uninterrupted data flow, and dispute-
settlement mechanisms.”

This is right, of course. But agreements by themselves are not enough, particularly given the fact that authoritarianism is endemic in the water-thirsty world.

The issue is highlighted most clearly by the 1960 Indus River agreement, “the world’s most successful water treaty.” In that deal, the Indian democracy generously agreed to allocate four-fifths of the six-river Indus system to downriver Pakistan. The inking of the agreement, however, only convinced the Pakistani political establishment that it had to control the entire river system. Mohammad Ayub Khan, Pakistan’s ruler at the time, wanted to grab the headwaters of the river from India after the signing, thinking the existence of the cooperative arrangement actually justified his country’s aggression.

The agreement, Chellaney points out, “was founded on the opposite logic, that a guaranteed share of the Indus-system waters for Pakistan would ease the territorial dispute and pave the way for subcontinental peace—an assumption that helped sway India to grant the lion’s share of the waters to the lower-riparian party.” But the deal did not in fact work, as Pakistan provoked a war just a half decade later.

In an analogous situation, the People’s Republic of China, the world’s “hydro-hegemon,” is the source of river water for more countries than any other nation. The Chinese control headwaters that are needed by almost half of the world’s population, in Central, South, and Southeast Asia, as well as Russia.

Yet Beijing, which annexed by force virtually all its water resources in the middle of the twentieth century, is building dams at a “frenetic” pace—it has completed an average of one large dam per day since 1949—and obviously seeks to present downriver neighbors with a fait accompli by diverting river flows. Significantly, the country with fourteen land neighbors—thirteen of them co-riparians—is a party to no water-sharing treaties and refuses to begin negotiations on water-sharing with other capitals. “No other country has ever managed to assume such unchallenged riparian preeminence on a continent by controlling the headwaters of multiple international rivers and manipulating their cross-border flows,” notes Chellaney.

Unfortunately, agreements with hard-line states do not ensure solutions to water disputes. As Ronald Reagan told us, the nature of governments matters, and this is evident from the peace along “the world’s most international river,” the Danube basin, which we learn in this important book includes a record nineteen countries. There is tranquility along the vital river because it is lined with democracies.

Yes, the world has a water problem. But it has a bigger problem with authoritarianism. Despots and dictators will use this liquid gold to disrupt peace, accumulate power, and force neighbors to submit.

Gordon G. Chang is the author of The Coming Collapse of China and Nuclear Showdown: North Korea Takes On the World. He blogs about China and Asia for World Affairs.