Recently, NASA has been looking at CubeSats as a way of carrying out economical deep space missions. One of the first of these may be shoebox-sized satellite called the Lunar IceCube, which is designed to look for water ice and other resources on the Moon. Tentatively aimed to launch on the first Orion mission scheduled to fly by 2018, it is intended to not only uncover materials for future deep-space missions and lunar colonization, but also as a technology demonstrator for a new class of interplanetary probes. 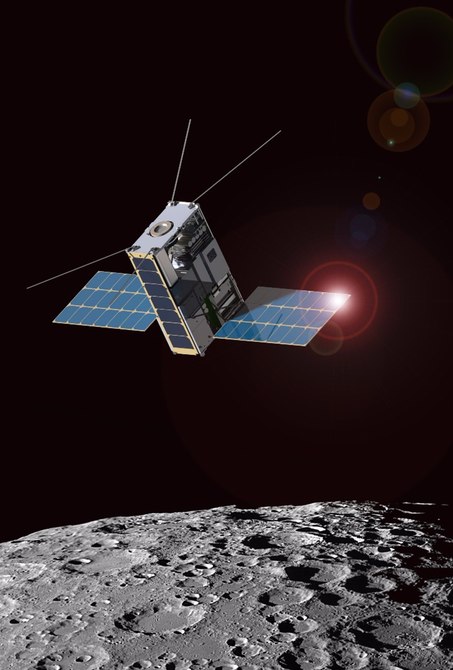 For space travellers, water ice on the Moon is like gold in the Klondike – and probably more valuable. If there is a substantial amount of ice in the perpetually shadowed craters at the lunar poles, it would provide fuel and water for spacecraft and manned lunar outposts. Probes like Lunar Prospector, Clementine, Chandrayaan-1, and the Lunar Reconnaissance Orbiter have been very successful at finding traces of ice, but, according to NASA, they lacked instruments operating in the infrared wavelength bands, which are most suitable for detecting water molecules.

Developed by a team led by Morehead State University (MSU) in Kentucky and including members from NASA’s Goddard Space Flight Center in Greenbelt, Maryland, and the Busek Company in Massachusetts, IceCube is one of the projects in NASA’s Next Space Technologies for Exploration Partnerships (NextSTEP) program. NASA describes IceCube as a six-unit CubeSat. That is, it’s a rectangular satellite made up of six standard CubeSat units, each measuring 10 cm (4 in) on a side. It was built by MSU, which will also use its 21-m (69-ft) ground station antenna for tracking and communications during the mission.

If permission is granted, CubeSat will fly as a secondary payload on the first manned Orion mission, Exploration Mission One (EM-1). It would be installed inside the adapter connecting Orion to the upper stage of the Space Launch System (SLS) booster rocket and, once in orbit, the CubeSat would be released before a state-of-the-art RF Ion BIT-3 electric thruster built by Busek kicks in.

What would follow is an intricate three-month trajectory plotted by Goddard that would take it into lunar orbit. This lengthy period is due to the tiny thrust provided by the ion drive combined with its miniscule store of iodine propellant. This means that IceCube needs to execute a complex maneuver making use of the gravity of the Sun, Earth, and Moon that would see it loop around the Earth a couple of times to build up enough speed for lunar rendezvous.

Once in its highly-inclined elliptical lunar orbit, IceCube would begin its six month mission, working in conjunction with the NASA Jet Propulsion Laboratory’s Lunar Flashlight mission, which will be looking for ice in crater shadows. 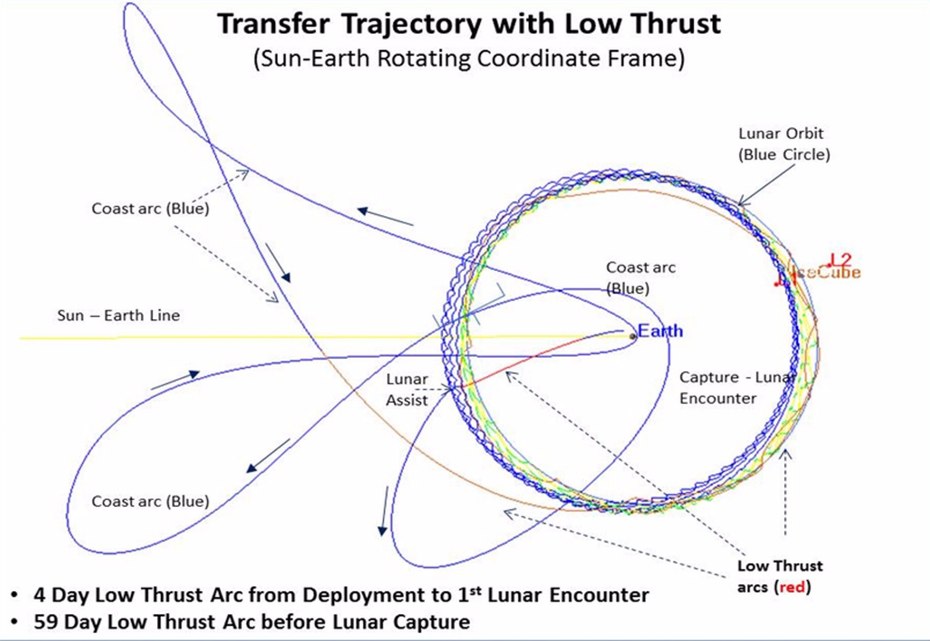 IceCube will rely on its only instrument, the Broadband InfraRed Compact High Resolution Explorer Spectrometer (BIRCHES). This is a high resolution, one million pixel, infrared detector for studying the lunar surface with a special emphasis on detecting water in its various forms. According to NASA, BIRCHES can measure the distribution of water and other volatiles as a function of time of day, latitude, and regolith age and composition. The purpose of this is not only to find water on the Moon, but also to gain a better understanding of the external factors, such as micrometeorites, that could affect its formation, trapping, and release.