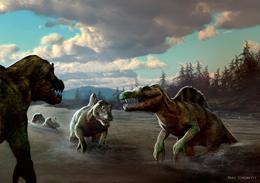 Spinosaurs may have spent much of their lives in water. Marc Simonetti

Researchers have found evidence of dinosaurs that spent much of their time in water. The discovery, made by analysing oxygen isotopes found in the fossils of a spinosaur that fed on fish, shows how the dinosaur might have coexisted with other large predators such as tyrannosaurs.

The results, published in Geology by Romain Amiot at the University of Lyon in France and a team of colleagues, show that dinosaurs were not in fact restricted to land as had been previously thought1. Water-dwelling animals such as Plesiosaurus and Ichthyosaurus, which although dinosaur-like in appearance, are not part of the dinosaurian lineage.

Baryonyx walkeri, from the spinosaur family, had a long, crocodile-like skull littered with iconic cone-shaped teeth. When it was found, theories swirled that with piercing teeth, rather than the serrated teeth so often found in closely related meat eaters such as Tyrannosaurus rex, and a long snout, the dinosaur was a fish feeder.

Evidence of fish-eating behaviour came with the discovery of partially digested fish scales inside the fossilized gut contents within a Baryonyx skeleton unearthed in England in 1983. But the gut contents also contained dinosaur remains and other evidence since has shown that pterosaurs also formed part of spinosaur diets, muddling the issue. The lack of noticeable fins, webbing or propelling tails also did not suggest an aquatic way of life.

This led Amiot and his colleagues to look at oxygen isotopes locked away inside the enamel of the spinosaur’s teeth and compare them to the oxygen isotopes found in the teeth of crocodiles and other dinosaurs, and turtle-shell fragments from the same period.

Fang find
Animals that spend a lot of time in a dry environment lose water through breathing and through evaporation from skin. Because oxygen-16 is lighter than another isotope — oxygen-18 — it is more readily released with water vapour. As a result, oxygen-18 becomes more concentrated in tissues and when tooth enamel is formed.

Being submerged a lot of the time, aquatic animals lose less water than land-dwellers, and so oxygen-18 is relatively less concentrated in their tissues. Aquatic animals also drink and urinate more rapidly than terrestrial animals and this constant flushing with fresh water keeps oxygen-18 concentrations low. 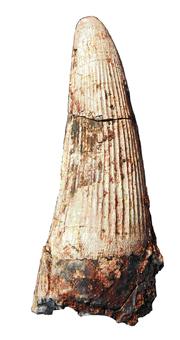 Spinosaur teeth are conical and not serrated like that of many carnivorous dinosaurs. Eric Buffetaut

The researchers reasoned that if spinosaurs were aquatic, then the concentration of oxygen-18 in their tissues would closely match aquatic animals such as crocodiles and turtles and be lower than the isotope values of other dinosaurs.

To see if this was the case, the team collected isotope data from 133 Cretaceous specimens — a mix of spinosaurs, other dinosaurs, crocodiles, and turtles — on four different continents. They report that spinosaurs had oxygen-18 values that were 1.3% lower than those found in terrestrial dinosaurs — a statistically significant difference. In contrast, oxygen-18 values in crocodiles and spinosaurids were not significantly different. The team argue that this indicates that spinosaurs were dwelling in aquatic habitats.

“This is an intriguing illustration of how careful isotope analyses can be used to differentiate the environments in which dinosaurs and other organisms lived,” says palaeontologist Michael Benton at the University of Bristol, UK.

Diet or domicile?
A potential argument against the new findings is that a diet composed largely of aquatic animals, such as fish, would lead to ingestion of food that is inherently low in oxygen-18 and cause spinosaur tissues to acquire low oxygen-18 values.

However, Amiot argues that “even if spinosaurs only ate fish and were terrestrial animals, they would evaporate this ingested fish water through skin and respiration and end up with a terrestrial isotope signature”.

“The method they are using is subtle and controversial, but with the result repeated in numerous spinosaurid specimens from so many localities it may well prove to be right,” says Benton.

Yet for some, it is the non-aquatic look of the dinosaur skeleton that is proving difficult to ignore. “I don’t doubt the isotope data, but if they were living in water, I am perplexed by why spinosaurs do not have limbs modified for aquatic propulsion or the flexible, propelling tails typically seen in aquatic animals,” says Paul Barrett, a palaeontologist at the Natural History Museum in London.

Amiot can’t answer that question yet but he is keen to start looking at when spinosaurs started their aquatic lives and hopes that an understanding of what forces drove them into the water might better explain the mysteries that remain around the group.