Water may not control the flow of rocks in Earth’s interior as much as researchers had thought. 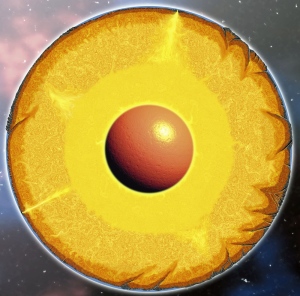 Convection in the Earth’s mantle (orange ring around the yellow outer core) may not depend on water’s presence for a lubricating effect, contrary to what geophysicists have assumed.

For decades, scientists have believed that the presence of water in deep-Earth rock makes it less viscous and allows it to flow. That movement underpins all sorts of geophysical phenomena, from the jostling of tectonic plates to giant convection patterns that transfer heat within Earth’s mantle. It also helps control the planet’s cycling of carbon and other life-critical elements from the deep interior toward the surface and back.

But high-pressure experiments on crystals of olivine, a common mineral in the mantle, hint that the textbook explanation may be at least partly wrong. Hongzhan Fei, a geochemist at the University of Bayreuth in Germany, and his colleagues describe the findings today in Nature.

Many laboratory experiments have demonstrated water’s weakening effect on minerals. But most of those studies looked at multiple crystals that were oversaturated with water, says Fei. When the crystals were squeezed, water between the grains could have allowed them to slide along their boundaries rather than causing deformation inside the crystals, as would be expected with true rock flow.

To avoid this, Fei’s team probed single crystals of olivine, at temperatures and pressures similar to those 100–200 kilometres deep in the planet’s mantle. The researchers did not look directly at how water weakens rocks, but at how it affects the diffusion of silicon atoms within crystals. When olivine is squeezed, silicon is the slowest atom to move around the mineral, and its diffusion rate may control how quickly a rock flows, says Fei.

The experiments showed that water had a much smaller effect than expected: pumping up the water content by a factor of 1,000 in the olivine crystal increased silicon diffusion by less than a factor of 10. “I was really surprised,” says Fei.

Several major geophysical ideas may need to be rewritten, the team argues. For instance, water may not the driving factor that softens the upper part of the mantle enough for tectonic plates to move around. And differences in water content may not explain how ‘hotspots’ jetting from deep in the mantle, such as that beneath Hawaii, remain immobile over time despite the movement of tectonic plates, say Fei and his colleagues.

Other deep-Earth experts are not yet convinced. Sumit Chakraborty, a petrologist at Ruhr University Bochum in Germany, supplied some of the materials used in Fei’s study, and has published papers that find that water has a big effect on the silicon diffusion rate in olivine2. He argues that the latest work has several major flaws.

For one thing, whether silicon-rich minerals contain water or not, it is not entirely clear if the diffusion rate of silicon in them actually determines how quickly rocks can creep. And unlike many types of olivine, the crystals used in the study contained no iron, even though minerals deform differently depending on iron content. The new work, Chakraborty says, makes too many far-fetched claims.

For his part, Fei is now looking at how silicon diffuses across mineral grain boundaries, to see if the behaviour is different from that in a single crystal.