The village of about 400 residents sits exposed on a barrier island in the Chukchi Sea. In 2008, local officials filed a federal lawsuit against about two dozen corporate entities, including ExxonMobil, BP and San Ramon-based Chevron Corp., claiming that coastal erosion was forcing the town to relocate. 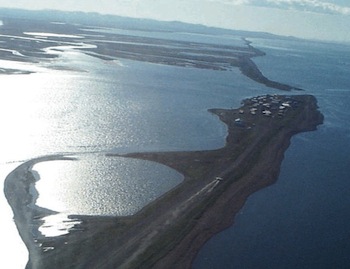 The original case was dismissed — but on Monday, the case lands in San Francisco’s Ninth Circuit Court of Appeals, where the town’s lawyers will again argue that major oil and power companies are responsible for the threatening rise in sea level, as the result of their collective greenhouse gas emissions. The appearance is timely, as only a week ago a major Arctic storm reportedly caused some damage to the settlement. (See Climate Central’s coverage of the Alaskan storm).

The current body of case law doesn’t offer the Kivalina elders much encouragement. Apart from their own suit’s dismissal, the US Supreme Court recently tossed a similar suit filed by California and other states, seeking carbon emissions caps on power companies’ coal-fired plants. The town’s lawsuit is supported by the Center on Race, Poverty and the Environment, which recently took California air officials to court over implementation of the state’s developing cap & trade program to reduce carbon emissions.

Kivalina has a couple of other claims to fame. It’s the last Native American community that hunts bowhead whales and was also the site of a still-mysterious orange rain that fell briefly last summer.