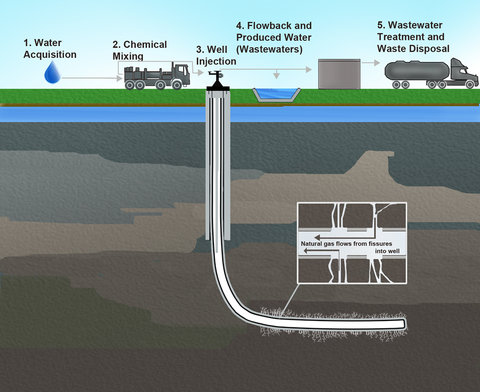 A diagram shows how water is used in hydraulic fracturing of gas and oil wells.Credit Environmental Protection Agency

A good post on InsideClimate News last week explored a new study of organic compounds and other constituents in the briny water that emerges from gas or oil wells created using the high-pressure process called hydraulic fracturing, or fracking. (This “produced water” is a mix of fracturing fluid and water from the rock layers being drilled.)

This peer-reviewed study by a pair of researchers at Rice University in Houston shows that while fracking-produced water shouldn’t be allowed near drinking water, it’s less toxic than similar waste from coal-bed methane mining. It also revealed how the contents of this waste differ dramatically across three major shale plays: Texas’ Eagle Ford, New Mexico’s Barnett and Pennsylvania’s Marcellus.

Hydraulic fracturing, or fracking, uses a lot of water. Here a worker monitors water pumping pressure and temperature at a site in western Colorado.Credit Brennan Linsley/Associated Press The paper,

“Organic compounds in produced waters from shale gas wells,” was written by Samuel J. Maguire-Boyle and Andrew R. Barron of Rice University (Maguire-Boyle and just published in Environmental Science: Processes & Impacts. The main intent of the study, according to the authors, was to identify the most appropriate treatment processes for this water, which is increasingly being reused.

In a Rice University news release, the authors note that the wrong treatment processes could actually make things worse:

The researchers found most of the salt, organic and other minerals that appear in produced water from shale gas reservoirs originate in the connate waters trapped in the dense rock over geologic time scales. These should be of little concern, they wrote

But they also found that produced water contained potentially toxic chlorocarbons and organobromides, probably formed from interactions between high levels of bacteria in the water and salts or chemical treatments used in fracking fluids.

Barron said industry sometimes uses chlorine dioxide or hypochlorite treatments to recycle produced water for reuse, but these treatments can actually enhance bacteria’s ability to convert naturally occurring hydrocarbons to chlorocarbons and organobromides. The researchers suggested this transition could happen either downhole or in storage ponds where produced water is treated.

“We believe the industry needs to investigate alternative, nonchemical treatments to avoid the formation of compounds that don’t occur in nature,” Barron said.
I’m sure the paper will be cited by the Environmental Protection Agency whenever it finally finishes its analysis of the impact of fracking on the nation’s drinking water resources.

Here’s a bit more from InsideClimate (please follow the link and read the rest):

Previous studies have examined the salinity of this waste and even some of the inorganic chemicals. Building from that, the Rice researchers identified 25 inorganic chemicals in the waste. Of those, at least six were found at levels that would make the water unsafe to drink—barium, chromium, copper, mercury, arsenic and antimony. Depending on the chemical, consuming it at high levels can cause high blood pressure, skin damage, liver or kidney damage, stomach issues, or cancer.

But the study’s innovation involved examining and identifying over 50 organic chemicals in the waste—an area that’s been little studied previously. Some of these are potentially dangerous, depending on their concentrations, such as the cancer-causing toluene and ethylbenzene; however, such levels were not provided.

Study author Andrew Barron said the results showed that produced water “was not quite as bad as we thought.”