White and Fluffy: 5 Facts about the Snow

Hard to believe, but a huge number of people on the planet, have never seen the snow. And for us, no blizzards, drifting snow and a mild winter is not winter at all. The snow never ceases to surprise us, inspires records and sets challenging tasks, and this is what our next Water-gallery is about. 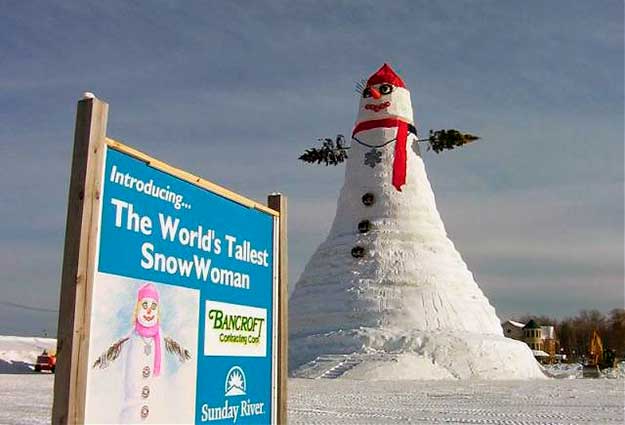 1. How to make a snowman with the size of a high-rise building? When the frost recedes and the snow becomes sticky, many of us wake up a sculptor inside. But not everyone can become world famous like the residents of the city of Bethel (Maine, USA). In 2008 they built the biggest snowman in the world, with a height of 36.6 meters. Skating snowballs here was not enough – hard work on this construction site was needed to fill formworks with snow and to tamp each floor. The giant snowman took 6 thousand tons of snow in total. Lips of tires, Christmas tree hands, eyelashes of skis, 40-foot scarf and a 23-pound pendant in the form of snowflake, and voila, she is ready! She was named Olympia in honor of a state Senator. This legendary monument melted only in July, seven months after the gala opening.

2. Where is the Museum of snow? Each snowflake is a beauty and harmony which can be infinitely admire. Japanese scientist Nakaya Ukichiro called snow «a letter from heaven, written in secret characters». It was he who first raised snowflakes in the laboratory, made their classification and founded a unique Museum in Hokkaido, which bears his name. Visitors enter the magic Kingdom of winter, no matter what is the weather outside. 200 photographs and multimedia exhibits tell about the mysteries of birth and the characteristics of the snowflakes structure and in the ice corridor the frozen waterfalls are located behind large windows. In these display windows the temperature of minus 15 degrees is constantly maintained, and glass is cold to touch. The white walls and furniture are decorated with the images of snowflakes. We can assume that mostly Museum is visited by the tourists from hot countries, where the snow itself is a miracle.

3. What is a «watermelon snow»? Numerous ice crystals that make up snowflakes fully reflect the rays of light, and the eye perceives snow as white. Sometimes the snow has a bluish tint. And how about pink? It’s not about the snow in the sunset, a natural phenomenon that occurs high up in the mountains and in the Polar Regions. Such snow is called red or watermelon snow. Unusual color is given to the species of snow by the resistant to cold unicellular algae Chlamydomonas (Chlamydomonas nivalis) that contains red pigment. It is noteworthy that snow, in which they live, has a light aroma and taste of watermelon. Previously it was thought that the Arctic snow is painted by the reservoir of meteorite iron. By the way, the powder of snow algae is used by many cosmetics manufacturers in the producing of anti-aging creams. For these purposes, the Chlamydomonas are specially grown in the laboratory.

4. Where the snow from the streets of St. Petersburg is utilized? After heavy snowfalls the cleaning equipment appears in the city streets. Just to remove snow for the city and dump it in a bunch is not an option. Because it absorbed all the dirt of the metropolis, and after thawing can cause damage to the environment. Fortunately, in St. Petersburg there are stationary snow melting points (SSP) and engineering-equipped snow points for disposal of snow, which are the responsibility of local Vodokanal. There arrive trucks full of snow. On snow points snow is melted by the heat of wastewater (sewage) waters – they are always warm in any frost. Produced water from the collectors is fed to the wastewater treatment plant, where it undergoes a complete cleaning cycle. 10 snow-melting points can melt during the day 59 000 cubic meters of snow. As for snow points, the snow melts naturally and water also flows to the treatment plant. Parts of the snow may be transported on the snow point or processed on site using snow-melting units.

5. How the artificial snow is made? The fact that snow on many ski resorts is not real, has long been perceived as a given. During sports competition artificial turf provides equal conditions for all participants, and this is its advantage. Snow is falling on the slopes from special units – guns and rifles. But where does it come from? Despite its name, the artificial snow is essentially frozen water, which is sprayed under pressure. The process is quite complex: using spray-nucleators water is mixed with cold compressed air and forms the core of the future snowflake. From conventional nozzles at the same time the water droplets that stick to the core are sprayed. In some installations, as a center of crystallization, or snowflake embryo, apply the bacteria Pseudomonas syringae which are able to freeze the water. However, in Germany, Austria and France, such methods are banned because the bacteria safety for health is still causing issues. Environmentalists are wary to the artificially snow, because its production requires a large amount of water and sometimes the water level in rivers, located near the ski resorts, is falling by 70%.

P. S. And finally – on the World Day of snow. In 2017, it will be celebrated on January 15. This festival is dedicated to winter sports, so celebrate it on the ski slope or even on the slide. Well, or just lie on the snow in a cheerful company. The main thing is that there should be enough snow on that day.