You’ve likely heard of snow lines here on Earth. They’re the places on mountains above which there is an eternal blanket of the white stuff. But newly forming stars have a snow line too. It’s the line where water vapor gets far enough from the heat of the star to form ice crystals around dust particles, and we usually can’t see it, even with our most powerful telescopes. Thanks to one particular stellar outburst however, the line was pushed about 13 times farther out than usual, allowing the Atacama Large Millimeter/submillimeter Array (ALMA) to pick it up. 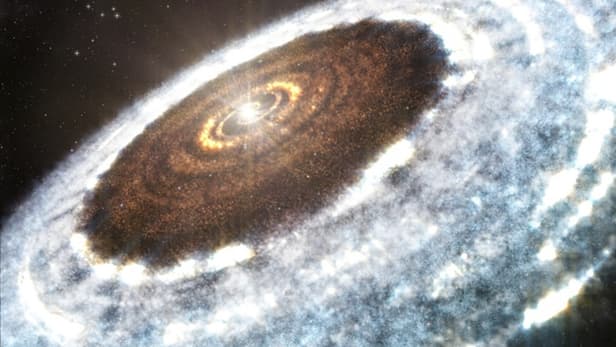 ALMA – an array of 66 radio telescopes in Chile – picked up the snow line around the star known as V883 Orionis. This relatively young sun can be seen from Earth in the constellation Orion and is approximately 1,350 light years away. While only 30 percent larger than our Sun, V883 Orionis has recently begun to appear 400 times more luminous to observers here on Earth – and it’s also gotten much hotter. This has happened because debris from what’s known as the protoplanetary disc – the swirling band of gas and dust surrounding a young star – has fallen onto the star’s surface. It’s kind of like throwing a bunch of dry leaves on a campfire.

Because V883 Orionis flared in this way, it pushed the water snow line to a distance of 40 au from itself and made it visible to ALMA (an au, or astronomical unit, is the distance from the Earth to the sun, so this is about 6 billion km, or 3.7 billion mi). Water snow lines are usually located only about 3 au (about 450 million km, 280 million mi) from their central sun in a new star system, which makes them hard to see due to the ambient brightness.

“The ALMA observations came as a surprise to us,” said Lucas Cieza from the Universidad Diego Portales in Santiago, Chile. “Our observations were designed to look for disc fragmentation leading to planet formation. We saw none of that; instead, we found what looks like a ring at 40 au. This illustrates well the transformational power of ALMA, which delivers exciting results even if they are not the ones we were looking for.”

Cieza is the lead author on a paper detailing the discovery that will be published in the journal Nature on July 14. 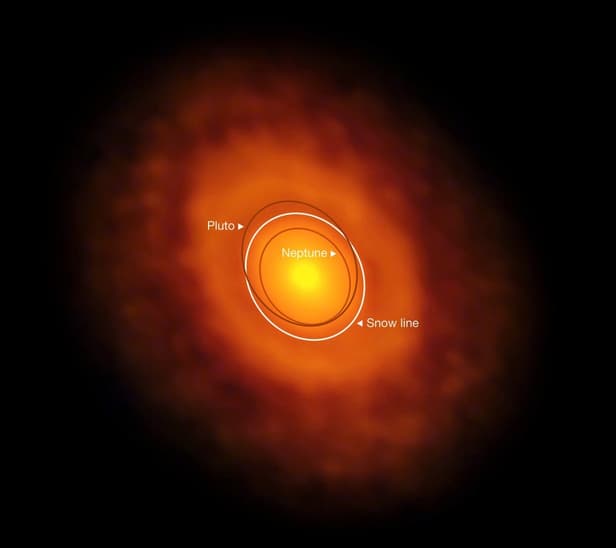 The image from ALMA showing where the water snow line appears like a dark ring with an overlay of familiar distances
Getting to glimpse a water snow line in a newly forming solar system can provide astronomers with information about planetary formation. Generally, rocky planets like Earth form between the water snow line and the central sun, while gas giants like Saturn form on the other side of the line. In our Solar System, for example, the water snow line existed between the orbits of Mars and Jupiter when our galaxy was young. But a flaring sun changes things up a bit.

“The discovery that these outbursts may blast the water snow line to about 10 times its typical radius is very significant for the development of good planetary formation models,” says the European Southern Observatory, which helps operate and maintain the ALMA array. “Such outbursts are believed to be a stage in the evolution of most planetary systems, so this may be the first observation of a common occurrence. In that case, this observation from ALMA could contribute significantly to a better understanding of how planets throughout the universe formed and evolved.”