New cycling water bottle does away with the cage

Although most cyclists probably don’t give much thought to their water bottle or bottle cage, the fact is that like just about anything else, those components can be lightened and simplified. That’s just what British cycling design company Fabric has done, with its new Cageless water bottle. 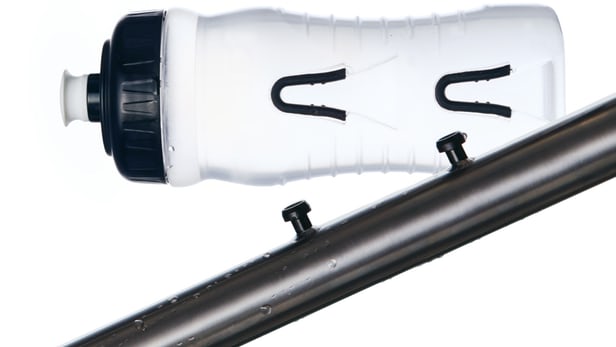 The idea behind the product is pretty simple. Instead of a separate cage and bottle, Cageless consists of a BPA-free 600-mL bottle with built-in retaining clips, and a couple of plastic studs that mount on the bike’s existing cage bosses. The clips on the bottle engage those studs, so there’s no empty cage left sitting on the frame when the bottle isn’t being used.

According to Fabric, there are several advantages to the system. First of all, with the studs weighing just 1.5 g each, it’s lighter than a cage. It’s also less costly than a decent bottle-and-cage combo, leaves the frame less cluttered-looking, it allows bottles to be mounted in tighter spaces, and it reportedly holds the bottle in place more securely.

Additionally, for riders such as time trialists who train with a bottle but compete without one, there’s no having to remove the cage before races.

It is worth noting that users do have to stick with Fabric’s own system-specific bottles, and they have to put the bottle back in a specific orientation relative to the studs. Bearing those limitations in mind, the 600ml Water Bottle/Cageless will be available starting in September, priced at US$20. A 750-mL bottle should be on the market by the end of the year.

The Koala Bottle also eliminates the need for a cage – it uses magnets – although it does still incorporate a frame-mounted cradle.