Where Ceres hides its water 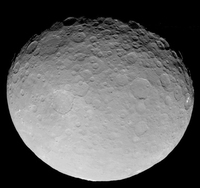 Frozen water has been lurking beneath the rocky surface of the Solar System’s biggest asteroid since its birth billions of years ago.

NASA’s Dawn spacecraft began orbiting Ceres (pictured), which is also a dwarf planet, in 2015. This allowed a team led by Thomas Prettyman at the Planetary Science Institute in Tucson, Arizona, to measure hydrogen at the asteroid’s surface.

Water inside Ceres chemically alters the surface, leaving a hydrogen imprint there. The highest hydrogen concentrations appeared at mid to high latitudes.

A second study looked at ice trapped in permanently shadowed regions of Ceres’ surface. Of the 634 craters studied, only 10 contained icy material, say Thomas Platz of the Max Planck Institute for Solar System Research in Göttingen, Germany, and his colleagues. Ceres, like Mercury and the Moon, can apparently trap frozen water in dark areas for long periods of time, they add.