You already know that water can have three states of matter: solid, liquid and gas. But scientists at the Oak Ridge National Lab (ORNL) have discovered that when it’s put under extreme pressure in small spaces, the life-giving liquid can exhibit a strange fourth state known as tunneling. 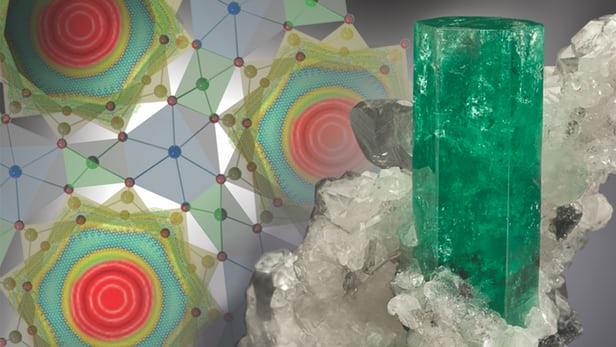 The water under question was found in super-small six-sided channels in the mineral beryl, which forms the basis for the gems aquamarine and emerald. The channels measure only about five atoms across and function basically as cages that can each trap one water molecule. What the researchers found was that in this incredibly tight space, the water molecule exhibited a characteristic usually only seen at the much smaller quantum level, called tunneling.
Basically, quantum tunneling means that a particle, or in this case a molecule, can overcome a barrier and be on both sides of it at once – or anywhere between. Think of rolling a ball down one side of a hill and up another. The second hill is the barrier and the ball would only have enough energy to climb it to the height from which it was originally dropped. If the second hill was taller, the ball wouldn’t be able to roll over it. That’s classical physics. Quantum physics and the concept of tunneling means the ball could jump to the other side of the hill with ease or even be found inside the hill – or on both sides of the hill at once.
“In classical physics the atom cannot jump over a barrier if it does not have enough energy for this,” ORNL instrument scientist Alexander Kolesnikov tells Gizmag – Kolesnikov is lead author on a paper detailing the discovery published in the April 22 issue of the journal Physical Review Letters. But in the case of the beryl-trapped water his team studied, the water molecules acted according to quantum – not classical – laws of physics.
“This means that the oxygen and hydrogen atoms of the water molecule are ‘delocalized’ and therefore simultaneously present in all six symmetrically equivalent positions in the channel at the same time,” says Kolesnikov. “It’s one of those phenomena that only occur in quantum mechanics and has no parallel in our everyday experience.”
By using neutron-scattering experiments, the researchers were able to see that the water molecules spread themselves into two corrugated rings, one inside the other. At the center of the ring, the hydrogen atom, which is one third of the water molecule, took on six different orientations at one time. “Tunneling among these orientations means the hydrogen atom is not located at one position, but smeared out in a ring shape,” says a report in the online news journal Physics.
“This discovery represents a new fundamental understanding of the behavior of water and the way water utilizes energy,” says ORNL co-author Lawrence Anovitz. “It’s also interesting to think that those water molecules in your aquamarine or emerald ring – blue and green varieties of beryl – are undergoing the same quantum tunneling we’ve seen in our experiments.”
Because the ORNL team discovered this new property of water but not exactly why and how it works, Anovitz also says that the finding is sure to get scientists working to uncover the mechanism that leads to the phenomenon.

Kolesnikov adds that the discovery could have implications wherever water is found in extremely tight spaces such as in cell membranes or inside carbon nanotubes. The following video from ORNL provides more details on the discovery.