‘Water grabbing’ refers to a situation in which public or private entities are able to take control of, or reallocate, precious water resources for profit or for power — and at the expense of local communities and the ecosystems on which their livelihoods are based. 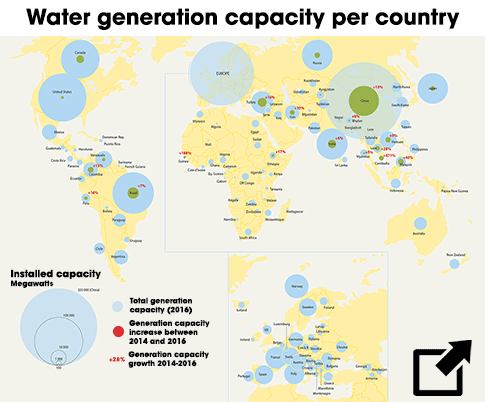 The effects have been well-documented: examples include families driven away from their villages to make room for mega dams, privatization of water sources that fails to improve access for the public, and industrial activity that damages water quality.

This piece, taken from the atlas “Watergrabbing – a Story of Water”, part of a project funded by the European Journalism Centre, outlines the history and impacts of hydropower as well as planned mega dams in key locations across the globe.

The industries that drive the use of water in the energy sector are hydropower, electric energy production from fossil fuels, and nuclear power.

Water is being used by power plants indirectly, for cooling. An estimated 583 billion cubic meters of water is extracted for use in plants that produce energy from fossil fuel and natural gas — that’s 15 per cent of all water extracted. Some 66 billion cubic meters of this water does not return to the supply source. According to the International Energy Agency, by 2035 water extraction is projected to increase by 20 per cent and consumption (for energy) by 85 per cent, a trend driven by construction of new power plants that extract less water but consume more energy per unit of electricity produced.

Together with other trends, such as the increase in water extraction for agriculture and energy consumption for cooling, this spells a water scarcity risk that could lead to an energy blackout for countries strongly dependent on fossil fuels. 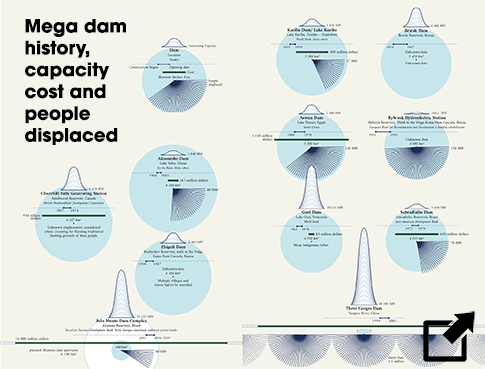 Hydroelectric power, on the other hand, directly harnesses the force of water to produce energy. Today it accounts for 16.4 per cent of the world’s energy. Total production reached 1,064 gigawatts in 2016, thanks to 57,000 dams of various sizes — from colossal giants to small dams to ‘micro-hydro’ plants.

Although hydropower comprises about 70 per cent of the world’s renewable energy mix, and guarantees a lower amount of total emissions than fossil fuel plants, its overall impacts are not always positive. This is especially the case when dams are not planned with an emphasis on the impacts on people and the environment.

In North America, many dams built in the 1980s are now being demolished because of their impacts on fish species such as salmon. In some cases they are replaced with more modern dams that do not require building large-scale reservoirs.

But, for the rest of the world, construction continues.

The first-ever dam dates from between 2950 and 2750 BC — built in Egypt to collect water for agriculture, and this continued to be the main purpose of dams until the late 19th century AD. It was only at the end of the 18th century that water exploitation for hydroelectric energy began, with construction of the first mega dams like the Aswan in Egypt (1902) and the colossal Hoover Dam in the United States (1932).

Today, over 900,000 dams are estimated to exist worldwide, 40,000 of which are on a scale large enough to be considered ‘mega dams’. Although there is no universal definition of what qualifies as a mega dam, as a general rule they are large structures over 15 metres in height generating over 400 megawatts of power on average.

Population growth and growing demand for water has accelerated the construction of mega dams — as has the availability of funding from China, with lenders having financed 330 dams in 74 countries. African countries, Ethiopia and The Republic of Congo in particular, are developing several projects thanks to Chinese and international funding.

China is financing large hydroelectric projects at home too. After opening the largest dam in the world in 2003, the Three Gorges Dam with a capacity to produce 18.2 gigawatts of energy, it now intends to build 100 mega dams as part of meeting its goal of reducing greenhouse gas emissions. 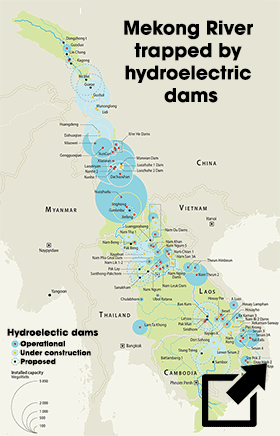 Another large emerging economy, Brazil, has also decided to invest heavily in constructing hydroelectric plants in the Amazon. There over 40 projects planned in the Tapajós basin. The goal is to produce 25 gigawatts of hydropower by 2025.
The attraction is clear: dams offer renewable energy that’s ‘cleaner’ than traditional fossil fuel sources, and promotes water security. But their negative consequences cannot be ignored.

Thousands of people who live in sites chosen to develop such projects are often relocated, without adequate compensation, to poorly built areas including shantytowns. The Three Gorges Dam alone has caused the displacement of over 1.2 million people; the smallest, Merowe Dam in Sudan, has forced over 50,000 people to relocate. In addition to the forced displacement of thousands of people, environmental impacts can include extinction of aquatic animals, destruction of wetlands and forest areas, and blockages in the natural flow of debris.

The following case studies offer a snapshot of mega-dam projects in Africa, Asia and Latin America.

The Mekong River, which translates to “Mother of Water,” is 12th in the world in terms of water discharging capacity, at 475 cubic kilometers per year. Its flows along an estimated 4880 kilometers from the Tibetan plateau through China’s Yunnan province to Burma, Thailand, Laos, Cambodia and Vietnam. Over 200 million people depend on the river for sustenance. Along the Mekong’s long path, over 60 million people rely on its waters to irrigate rice crops and for small-scale fishing. The river also supports commercial fishing in the delta. 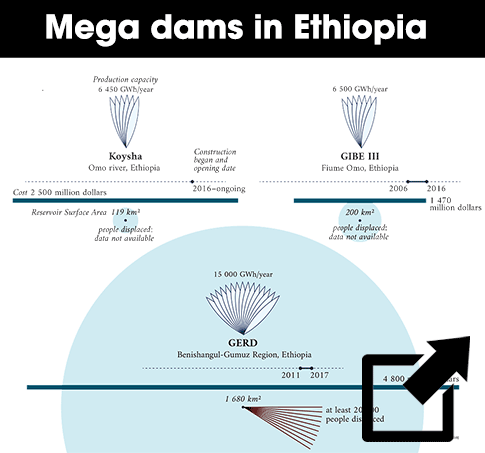 Although the river has always supported hundreds of indigenous communities living in harmony with the Mekong, in recent years a number of factors have altered this balance. The most significant of these are the construction of over 39 mega dams, changing water levels because of climate change, and increasing water extraction.

“Future water shortages threaten to slow down the key sector for alleviating poverty in Southeast Asia: agriculture,” says Brahma Chellaney, author of Water, Asia’s New Battleground. “The risk is likely to explode political tensions surrounding the Mekong if the states do not cooperate to face these new challenges.”

Many consider dams a significant threat. China has built seven large hydroelectric plants in the Upper Mekong, while 20 others are in various planning phases. Eleven additional dams are being planned in the southern part of the basin. These dams are mostly located in Laos, one of Asia’s poorest countries. Laos aspires to become Asia’s ‘hydroelectric battery’, with a production potential of 26 gigawatts. 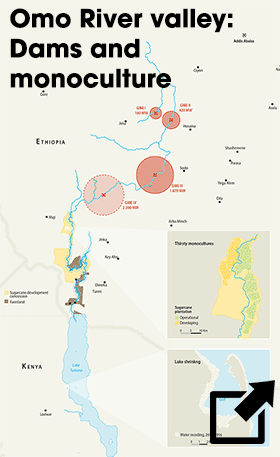 However, the NGO International Rivers cautions that “dams could significantly reduce fishing, restrict the flow of sediments and elements for agriculture, impact food security and jeopardize the Mekong Delta, in addition to forcing tens of thousands of inhabitants to relocate.”

Ethiopia is one of Africa’s fastest-growing economies. The country relies principally on agriculture, with small farmers making up more than 80 per cent of the population. However in the last 10 years, the country has suffered from heavy degradation of soil and other natural resources, with river basins increasingly vulnerable to erosion and sedimentation. 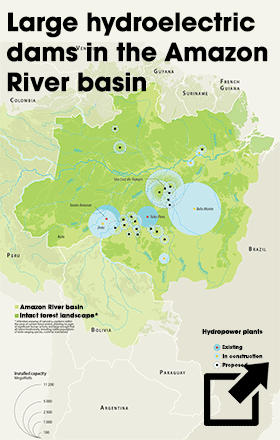 To address these critical issues, develop the economy and increase access to an electricity network that is among the poorest on the planet, in the 1980s the Ethiopian government approved construction of a large series of hydroelectric dams. Two of these — the Gilgel Gibe III, part of a hydroelectric cascade of five dams in the Omo river, and the imposing Grand Ethiopian Renaissance Dam in the Blue Nile, with an expected capacity of around 600 megawatts — are set to triple the country’s power generation capacity.

Several organizations and political figures consider the Gilgel Gibe group of dams a highly controversial project, because of its impacts on the Omo River and Lake Turkana basin (the largest lake in Africa’s desert region). 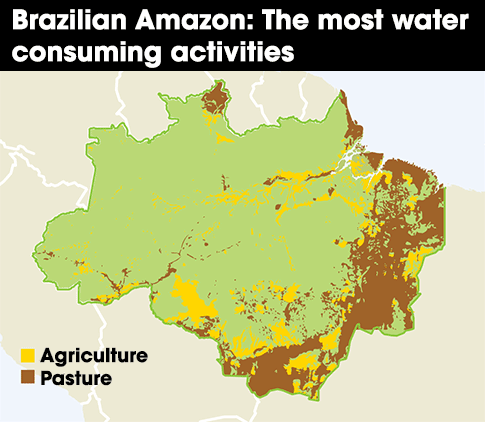 The Turkana basin, which receives more than 90 per cent of its water from Omo, supports the livelihoods of around 350,000 people. In recent years the lake has receded dramatically, a change that has exponentially increased its salinity. This is due to the water level monitoring that is part of the construction of the Gibe III dam, as well as the construction of immense agribusiness projects supported by the dam reservoirs, mainly for sugar refining and ethanol production.

Along the Omo River, hundreds of thousands of farming communities are directly affected by the dam and tens of thousands have been relocated by the government to five new towns and villages around the sugar and ethanol plantations.

When the Omo floods, it supports agriculture by making water available for irrigation and by depositing silt along the river bank. But because the dam prevents the natural flooding process, many communities can no longer count on this support. This is a serious problem for the livelihoods of farmers used to planting crops along the banks of the river every year.

Brazil holds one-fifth of the world’s water reserves, yet periodically suffers from severe water shortages. Natural aquifers are unevenly distributed across the country, making for a water-rich North and constant shortages in the South. Climate change related effects on rainfall have also had an impact in arid areas, slowing the refilling of groundwater aquifers from which large volumes of water area being extracted.

The environmental factors are exacerbated by an economy that is firmly built on agriculture and livestock farming, which are responsible for 72 per cent of water consumption, according to the country’s national water agency (Brazil is the second largest exporter of food products). Added to these pressures is an insufficient framework for sustainable management policies for groundwater and water infrastructure.

These pressures escalated into a crisis in 2016, when an extended water-rationing programme was put in place for 30 million citizens in the metropolitan area of San Paolo and many other parts of the country. For months, industries operated under the uncertainty of having to stop production because of water scarcity.

Also at risk was the agricultural industry, which accounts for 8.4 per cent of GDP, and has seen a dangerous decrease in water availability in dry seasons. At the end of 2016, less than 20 per cent of irrigated land had access to efficient irrigation systems.
Brazil’s water troubles are far from over. In the next decade the water demand is expected to grow substantially. The country will need to invest in more sustainable models of agriculture, upgrade water infrastructure, and support water recycling and reuse systems in industrial production. But for now, the government’s focus is on dams. Hydroelectric plants currently produce 62 per cent of Brazil’s energy. Facing a rising demand for electricity and water, the country has planned to install hydropower projects worth 25-gigawatts of energy by 2024. Large structures were proposed in São Luiz do Tapajós and Jatobá, with more modest ones in Cachoeira do Cai, Jamanxi and Cachoeira dos Patos.

But large agribusiness operations, rather than the Brazilian citizens who need power the most, are likely to be the beneficiaries, according to Greenpeace International. And campaigners are concerned that the water taken from these dams will be used to grow extensive plantations of soya for export.
The dams are to be constructed in rainforest areas. The water held by the structure at Tapajós alone would flood an area the size of greater London, Paris and Amsterdam combined. Animals are expected to pay much of the environmental toll. The government’s own environmental impact study uncovered eight new species of mammal living in the area under threat, including a monkey and five species of bat, while insufficient studies have been done to document fish species.