It’s become an annual affair, the rafts of green algae washing up on the shores of Qingdao, China. Since 2007, massive algae blooms in the Yellow Sea have been fueled, scientists think, by “pollution and increased seaweed farming” south of Qingdao. The mats of photosynthetic phytoplankton aren’t dangerous to people (unless you count ruining a day at the beach as dangerous), but the return of these massive algae blooms year after year could be troubling for the marine creatures living in the Yellow Sea. 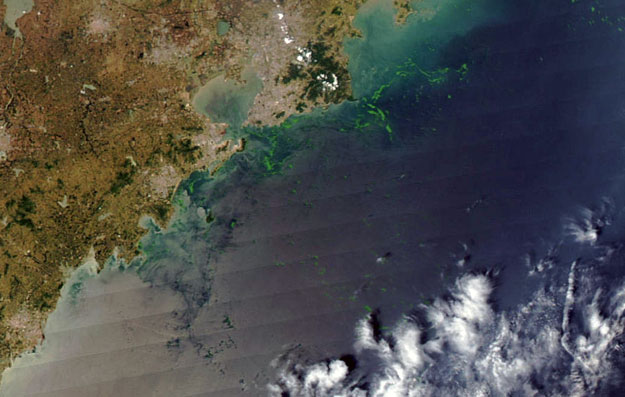 “The carpet on the surface can dramatically change the ecology of the environment beneath it,” says the Guardian. “It blocks sunlight from entering the ocean and sucks oxygen from the water suffocating marine life.”

Vast blooms of algae can cause the water to become “hypoxic,” to have the concentration of oxygen in the water drawn down so low that it makes it uninhabitable for many marine creatures. A strong case of hypoxia can further lead to something called a “dead zone.” And, by drawing down the oxygen levels and messing with the chemistry of the water, algae blooms can temporarily amplify ocean acidification.

Such recurring, annual algae blooms like the one in Qingdao aren’t limited to China’s Yellow Sea, either. According to Scientific American, there are at least 405 dead zones around the world. One of the worst in the world is the one in the Gulf of Mexico, where this year researchers with NOAA expect around 8,000 square miles of the Gulf to be oxygen depleted—a patch of ocean about the size of New Jersey, says National Geographic. If the bloom lives up to expectations, this year’s would be the largest dead zone in the Gulf on record.

So while China’s algae problem may be making a mess for swimmers, it’s the life beneath the waves that may be hurting the most.